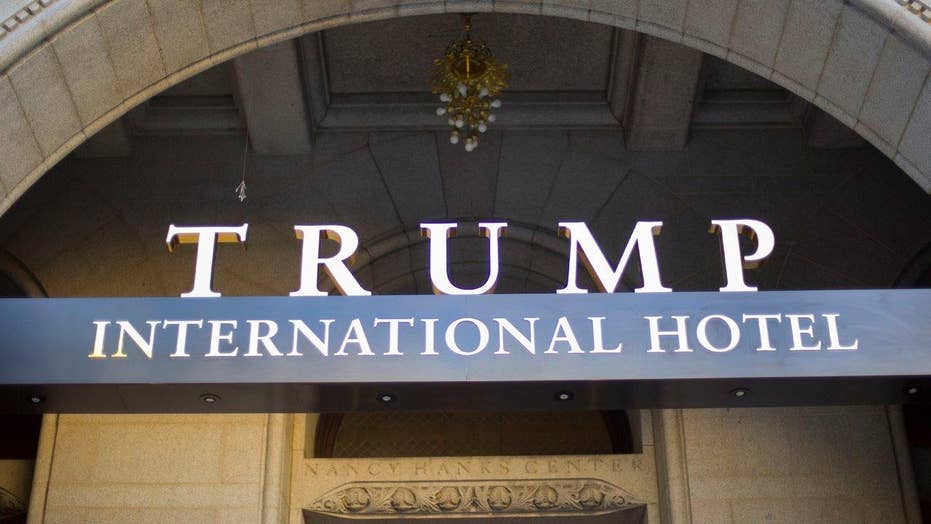 Trump brand a casualty in war for the White House

Is the Trump brand in freefall because of the bruising presidential campaign? Customers are pushing for a boycott of Ivanka Trump's fashion line and new Trump hotels will not bear The Donald's name. FBN's Maria Bartiromo breaks it down for 'On the Record'

Donald Trump built his presidential campaign on his reputation as a businessman -- but no matter what happens on Election Day, that business will face a complicated picture as it looks to build a brand that is far more controversial than it was before the 2016 race.

Already, Trump’s hotels, including his newest property in Washington, D.C., are facing challenges. Low occupancy rates at the Trump International Hotel in the nation’s capital forced the company earlier this month to cut prices 50 percent on its own website. The hotel, which had a soft opening last month, held its official ribbon-cutting ceremony Wednesday.

Meanwhile, the latest line of properties, Scion, has dropped the Trump name.

But some analysts suggest that while Trump's properties may be taking a short-term hit, they'll recover.

“The outcome isn’t locked and loaded yet,” Cusson said. “I can’t imagine it will have a sustained impact on business.”

Denise Lee Yong, author of “What Great Brands Do,” agrees.

She believes that while Trump’s more controversial comments have alienated some would-be clients, his run for president has given him a platform to reach an even broader base.

“It might end up being a wash,” she told FoxNews.com.

It’s no secret Trump has routinely used the political stage to promote his personal businesses.

He’s used the backdrop of his hotels and golf courses to give speeches and even plugged the newest luxury project during the Sept. 26 presidential debate. “We’re just opening up on Pennsylvania Avenue, right next to the White House, so if I don’t get there one way, I’m going to get to Pennsylvania Avenue another,” he said.

Trump told The New York Times he is simply “demonstrating his credentials for the presidency at such events by showing the type of efficiencies he would bring to government.”

“With less than two weeks to go until Election Day, Mr. Trump is repaying them by using their campaign to showcase his hotel. He said he wouldn’t let them down, but he already has,” he told the Times.

Before Trump entered the race, foot traffic to his properties was steady year-over-year, according to an analysis from Foursquare, a location intelligence company that also forecasts business trends.

Since he announced his candidacy in June 2015, foot traffic at Trump-branded hotels, casinos and golf courses in the U.S. has been down. And when primary voting season was in full swing in March 2016, popularity for the Trump brand slid 17-24 percent, according to the report. Among the hardest hit were Trump SoHo and Trump International Hotel & Tower Chicago.

The report also broke down the difference in foot traffic from his properties in reliably red states and those in blue territory.

Many of Trump’s high-end hotels like the Trump International Hotel & Tower Chicago as well as his casinos and golf courses are located in “blue” states and rely on visitors who live in the area.

“Trump’s blue state properties – spread between New York, New Jersey, Illinois and Hawaii – have taken a real dip, with diminishing visits in March and a widening gap that continues straight through July, when share fell 20 percent versus July 2015,” the report said.

A deeper dive suggests that the market share losses have been driven by women.

“Trump properties have seen a double-digit decrease in visits from women this year, with a gap that widened starting in March 2016,” the report said.

His family members and their businesses aren’t immune either.

Critics of the Republican presidential nominee have been urging shoppers to boycott daughter Ivanka Trump’s clothing line as well as the stores that carry it. The #GrabYourWallet campaign was launched by San Francisco marketing specialist Shannon Coulter following the leaked video that surfaced of Trump talking about groping women.

“If Ivanka Trump had distanced herself from the campaign, I would not be boycotting her,” Coulter told The Guardian.

Ivanka Trump’s clothing line, which contains mid-priced, business attire, pulled in about $100 million in revenue last fiscal year, according to G-iii, the apparel giant that manufactures and distributes her line.

The boycott damage may be limited. New York-based Brand Keys conducted market research for Forbes finding that a majority of millennial women with disposable income were still willing to consider buying her clothes and shoes.