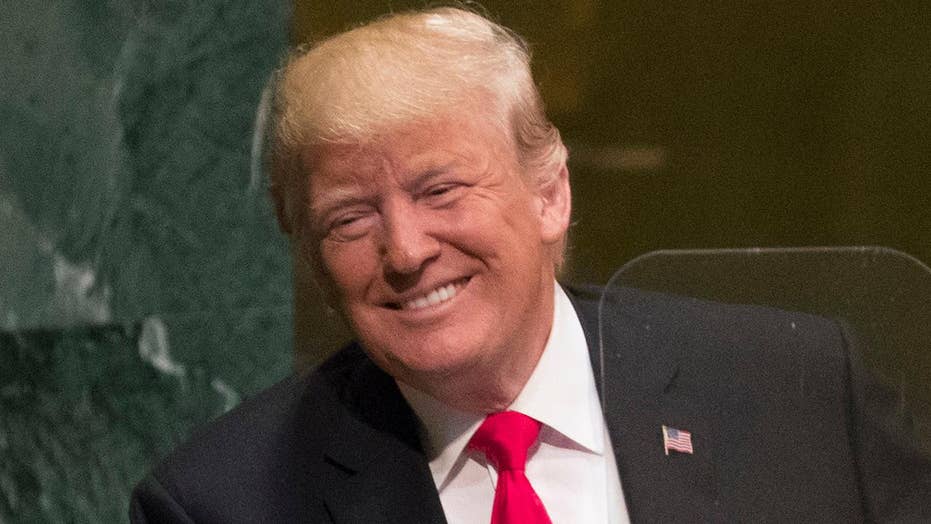 Trump gets a laugh at UN General Assembly

President gets an unexpected reaction in the assembly hall after claiming his administration has accomplished more than almost any other in U.S. history.

President Trump was met with awkward laughter from a U.N. General Assembly audience on Tuesday while boasting of successes under his administration, but brushed off the response as he doubled down on an “America First” agenda at the globalist body.

Trump prompted laughter and gasps from the audience when he claimed that “in less than two years, my administration has accomplished more than almost any administration in the history of our country.”

“I didn’t expect that reaction, but that’s OK,” he chuckled in response.

But as Trump stood in the symbolic heart of global governance, he espoused an unashamedly nationalist doctrine that underscored his administration's tensions with the U.N.

“We will never surrender American sovereignty to an unelected, unaccountable global bureaucracy. America is governed by Americans," he said. "We reject the ideology of globalism, and we embrace the doctrine of patriotism."

He later added that "America will always choose independence and cooperation over global governance, control and domination."

He echoed a similar theme from his 2017 address, when he called on all countries to put their own interests first: “The United States will not tell you how to live, work or worship. We only ask that you honor our sovereignty in return.”

But Trump also warned that he would act only in the interests of the U.S., particularly when it came to funding.

“We are only going to give foreign aid to countries who respect us, and frankly, are our friends,” he told the audience, which consisted of a number of world leaders of countries that receive U.S. aid.

He also warned the U.N. that it could expect further cuts in U.S. funding. The U.S. has reduced its contributions to the U.N., pulled funding from the U.N.’s Palestinian refugee agency, and pulled out of the U.N. Human Rights Council -- which Ambassador Nikki Haley decried as a “cesspool of political bias.”

"I have told our negotiators that the U.S. will not pay more than 25 percent of the U.N. peacekeeping budget. This will encourage other countries to step up, get involved, and share in this very large burden."

According to the U.N., the U.S. currently is the biggest contributor to the peacekeeping budget, and funds 28.47 percent of the budget.

While Trump’s brand of patriotism was used to caution other countries, he also defended the U.S. at a body that is often perceived as distinctly anti-American.

“In America we believe in the majesty of freedom and the dignity of the individual, we believe in self-government and the rule of law and we prize the culture which sustains our liberty, built on strong families, deep faith, and fierce independence,” he said.

“We celebrate our heroes, treasure our traditions and above all, we love our country,” he said, to silence from the assembly.