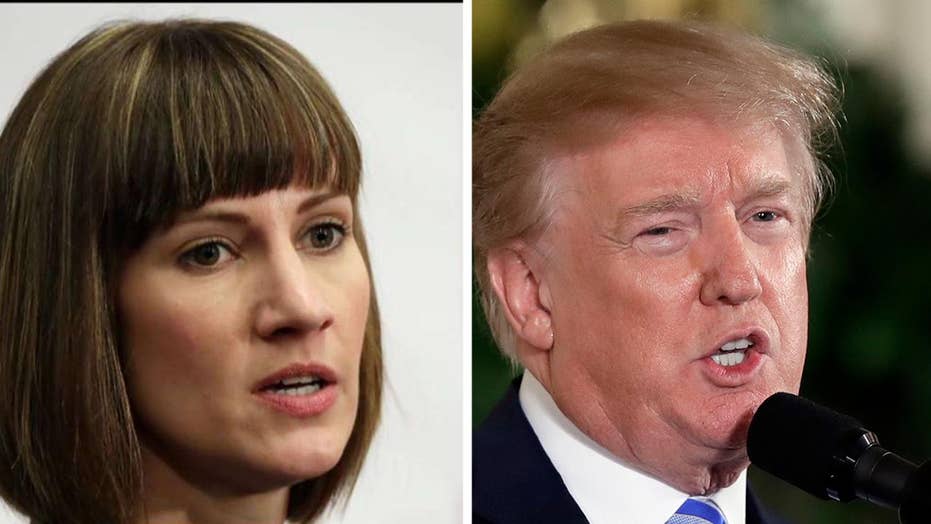 Rachel Crooks alleges the incident occurred in 2006; President Trump takes to Twitter to slam the accusation on as 'fake news.'

An Ohio woman's claim that Donald Trump stole a long and unwelcome kiss from her in the lobby of Trump Tower some 13 years ago is fake news, the president declared Tuesday.

Rachel Crooks, 35, who is running for office in Ohio as a Democrat, told her story most recently to the Washington Post, which published it Tuesday on the front page. She claimed the then-real estate mogul spied her by the elevators at his signature building as she waited to go upstairs to her job as a secretary for an investment firm.

“He took hold of my hand and held me in place like this,” Crooks told the paper, in a story she had previously told to The New York Times during the 2016 presidential campaign. “He started kissing me on one cheek, then the other cheek. He was talking to me in between kisses, asking where I was from, or if I wanted to be a model. He wouldn’t let go of my hand, and then he went right in and started kissing me on the lips.”

Trump blasted back Tuesday, saying he doesn't know Crooks -- and has never been in the habit of kissing women in the lobby of his very-public office and residential tower.

"A woman I don’t know and, to the best of my knowledge, never met, is on the FRONT PAGE of the Fake News Washington Post saying I kissed her (for two minutes yet) in the lobby of Trump Tower 12 years ago," Trump tweeted. "Never happened! Who would do this in a public space with live security...cameras running. Another False Accusation."

The Washington Post cited emails Crooks allegedly sent on the day of the incident, including one to her mother in which she alluded to a "weird incident with Mr. Trump.”

Crooks' account is the latest of more than a dozen in which women claim Trump made advances at them, with some dating back to the 1980s. Accusers include a reality-TV host, a runner-up on “The Apprentice,” a yoga instructor and an adult-film star.

The kiss allegedly happened in the lobby of Trump's iconic building

Trump claims the accusations were all made for political reasons, and lawyer Lisa Bloom, who has represented several women who claim to have been sexually harassed by Trump, has admitted that her firm offered to pay some of the women.

Crooks is now employed as a recruiter at Heidelberg University, in Tiffin, Ohio. She is running for a seat in the Ohio legislature.