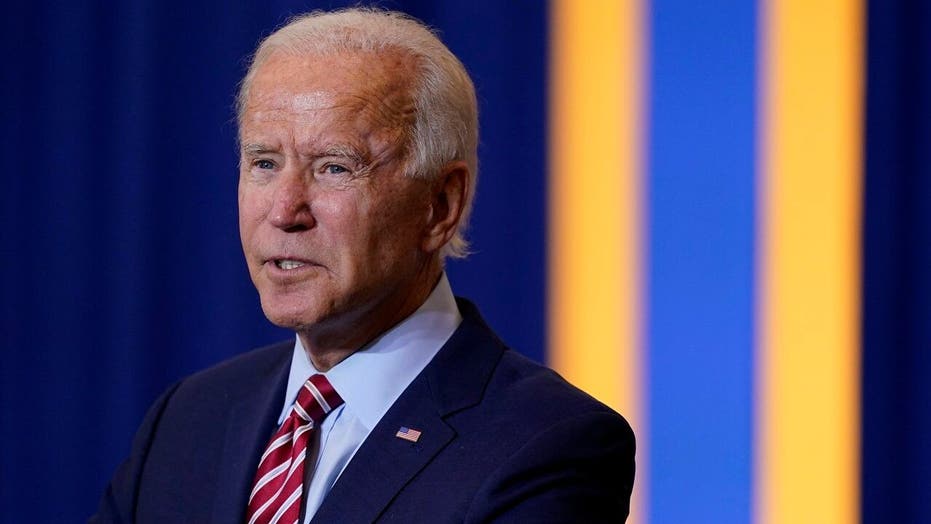 A lack of enthusiasm for Joe Biden from Black and Latino men could provide President Trump with an opening to seize on, according to a Politico report.

Though Black women and Latinas still reliably support the Democrat, Biden's lead with Black and Latino men, though clear, falls behind that of Democrats historically.

Last week, Biden’s running mate Kamala Harris reportedly held a call with big names in the Black community such as rapper Jay-Z and radio host Charlamagne tha God to tackle a question that has besieged the campaign: how to turn out Black male voters for Biden in full force.

Civil rights attorney Benjamin Crump, who recently represented the families of George Floyd, Ahmaud Arbery and Jacob Blake, was also on the call. He said participants urged Biden to provide more for Black men than just an alternative to Trump.

“It’s not just about anti-Trump but what we’re going to do on our side,” he said to Politico.

Crump said that Black men want to hear about how Biden will build business and fix the economy, in addition to talk of criminal justice and police reform.

Trump’s campaign, meanwhile, has been spending millions on digital ads focusing on the economy and criminal justice reform.

Crump also said that some Black voters still take issue with Biden’s record in Congress, particularly his refusal to apologize for his role in the 1994 crime bill.

“You have to go ahead and own that and talk about how it was a mistake,” the attorney said.

Meanwhile, Trump’s signing of the First Step Act in 2018, which expanded early release for some  felony offenders in federal prison, has prompted some Black men to give Trump a second look.

Pollster Cornell Belcher, who worked on Barack Obama’s campaigns and is African American, said to Politico that Black male voters are not “breaking for Donald Trump,” but at this point “don't see a great deal of difference between Democrats and Republicans.”

Rev. Al Sharpton told the news outlet that he frequently gets calls on his radio show from Black men asking what Democrats will do for them.

Trump famously appealed to Black voters in 2016, asking them, “What do you have to lose?”

Belcher said there is a “notable swath of voters who are holding back from Biden.” Last week, he shared polling data with Congress to show Biden’s vulnerability with Black men, particularly young ones.

Republicans have been taking advantage of the disparity-- last week the Trump campaign spent hundreds of thousands on ads in urban radio markets featuring former NFL player Herschel Walker and Georgia state Democratic Rep. Vernon Jones. The campaign recently opened a Black and Latino center in Philadelphia, as well as a field office in Milwaukee on Martin Luther King Jr. Drive — a first for a Republican presidential candidate.

As for Latino men, Democrats admit that the party has not always prioritized their interests, leaving some disillusioned with the political system altogether. Politico notes that some Hispanic men who hail from countries with a long line of “strongmen” leaders could be drawn to Trump's muscular leadership style. And Hispanic men hailing from socialist dictatorships are often leery of the Democratic Party’s veer to the left.

A recent Monmouth University poll found Biden garnering 67% support among Black, Latino and Asian voters, a strong lead over Trump but more narrow than the usual Democratic lead, with voters of color. Hillary Clinton won the same demographics, 74-21%, in 2016.

“We’re in this position because we haven’t worked [to win over] Latino men in the last decade,” he told Politico.

Sen. Bernie Sanders recently told Politico that Biden must reach beyond establishment Democrats to connect with younger Latino voters through grassroots leaders in the community.

“But I think there is a likelihood that if that is not done, turnout in the Latino community could be lower than we would like and it could result in Biden losing some very key states,” he said.

In Arizona, where the Latino population is largely Mexican-American, Biden holds a 62-29 lead with Latinos, according to Equis Research, a Democratic firm.

A survey by the same firm found that in Florida, where a large swath of Latinos are of Cuban descent, Biden’s lead over Trump with Latino men is 10 points, but with Latinas it rises to 21 points. A separate internal Republican poll of likely Hispanic voters shared with Politico showed Biden and Trump nearly even among men, 40 to 39%. Women supported the Democrat by 18 points.

Though Biden is ahead overall with Latino voters in Florida, his margins are smaller than Hillary Clinton’s were in 2016. Biden admitted as much himself in a trip to Florida last week.

“I will talk about how I am going to work like the devil to make sure I turn every Latino and Hispanic vote,” Biden said before his trip. Asked about his poll numbers among Hispanic voters, he said they were “much higher than [Trump's]. But they gotta go higher.”

ARIZONA, A WIN FOR TRUMP IN 2016, SLIDES TO 'LEAN DEMOCRAT' IN COOK FORECAST

In Florida, a must-win state for Trump, Republican-leaning Cuban Americans are said to be finding common cause with other Latin Americans who fled left-wing revolutions.

Biden has been performing strongly with White college-educated voters and has outperformed Hillary Clinton with Trump’s key base-- White, older voters.

Four years ago, Trump won voters over 65, of any ethnicity, by a margin of 13.3 percentage points. But this time around, polls suggest elder voters favor Biden 49.5% to 45.7%, with most of the movement coming from White, older voters, according to a FiveThirtyEight average.