Georgia Secretary of State Brian Kemp has won a bruising Republican runoff in the state's race for governor, leveraging a damning secret audio recording of his opponent and a last-minute Trump-Pence endorsement.

The race will test Democrats' assertion that changing demographics have turned the Republican stronghold into a swing state. Cagle's campaign was rocked by a secret recording in which he says he helped pass a "bad public-policy" bill for political gain.

In another recording, Cagle allegedly offers to help pay off former gubernatorial candidate Clay Tippins' $300,000 in campaign debt in exchange for an endorsement.

Cagle denied the allegations, saying he never offered a bribe for any reason and saying he was tiring of "antics" in the race.

After conceding the GOP runoff to Kemp on Tuesday, Cagle told supporters that Kemp was "undeniably ready to lead this state." The praise was a swift reversal after a nine-week runoff that saw Cagle and Kemp attack each other on multiple fronts.

Gov. Nathan Deal and the National Rifle Association had supported Cagle. But Kemp was boosted by the president's endorsement.

Speaking to Fox News on Monday, Kemp called Trump's endorsement on Wednesday "huge," and compared it to "pouring gasoline on a fire."

Kemp, who has called himself a "politically incorrect conservative," made headlines in May for running an advertisement boasting that he has a pick-up truck "in case I need to round up criminal illegals."

WHO ARE KEMP AND CAGLE? A CLOSER LOOK AT THE CANDIDATES

And in an interview with Fox News on Tuesday, Cagle acknowledged the significance of Trump's endorsement, but touted Georgia Gov. Nathan Deal's support for his candidacy.

"We have two gold-star endorsements: one is President Trump, and the other is Gov. Deal," Cagle said. "And Gov. Deal knows this state, and I have partnered with him to create the number-one state to do business in, the historic job numbers and the historic tax cut, as well." 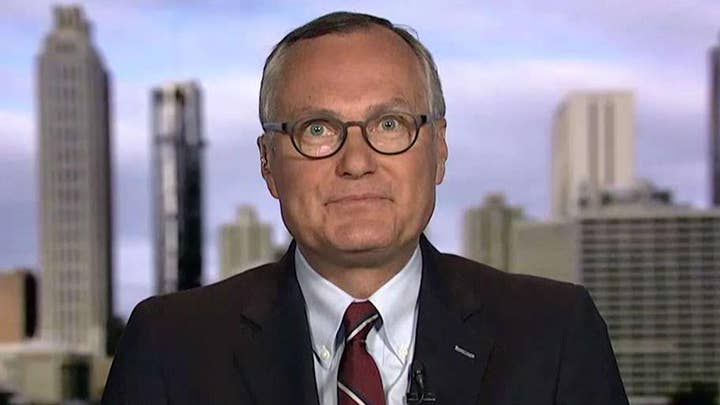 Georgia, long a deep-red state whose changing demographics may make it a swing state in coming elections, went for Trump by less than six percentage points in 2016.

Georgia's potential evolution toward swing-state status comes at a critical time for Democrats. Gains in coastal and Sunbelt states — Virginia, North Carolina and potentially Arizona — could offset growing challenges for the party in the upper Midwest, where Trump shocked many Democrats in 2016 by sweeping a band of states that Hillary Clinton's campaign had considered a "blue wall."

"This is a light-red state," GOP pollster Mark Rountree said. "I don't think Georgia will be a national afterthought for either side anymore" regardless of what happens in November, Rountree adds.