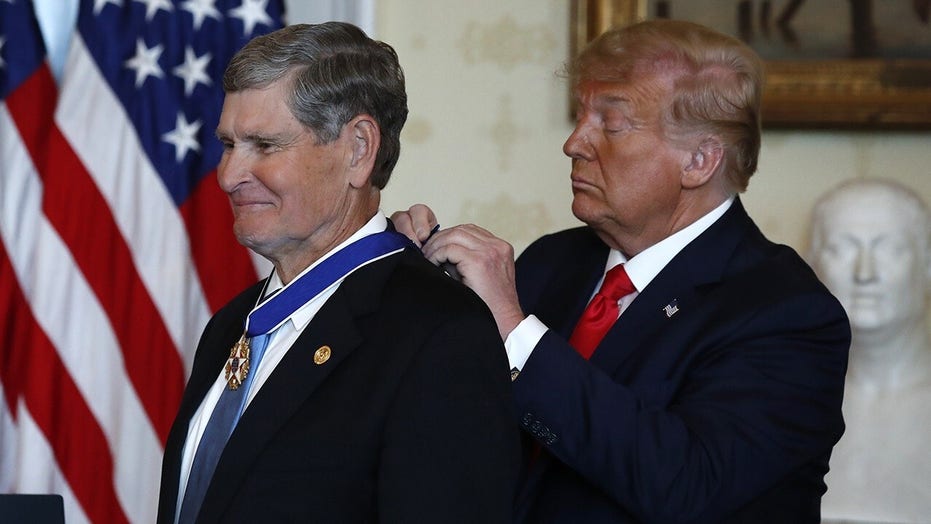 President Trump Friday awarded the Presidential Medal of Freedom to Jim Ryun, a three-time Olympian and former GOP congressman from Kansas, calling him a "legendary runner" and "true American patriot."

"He's a giant of American athletics and dedicated public servant and a man of charity, generosity and faith," Trump said in a White House ceremony where Ryun was joined by his family. "He's a great man, actually. Jim, thank you so much for your unfailing devotion to our country."

Nicknamed the "master of the mile," Ryun, 73, became the first high school athlete to run a mile in under four minutes and was the last American to hold the world record in the mile run. He went on to become an Olympic silver medalist before turning to public service as a five-term congressman from Kansas.

"I wish we had him now," Trump said of Ryun's service in the House of Representatives.

The Presidential Medal of Freedom is the nation's highest civilian honor. Presidents traditionally honor Americans who have made outstanding contributions to the security or national interests of the United States, to world peace, or to cultural or other significant public or private endeavors.

For Ryun, his start in sports was a rocky one.

The young Ryun would go to bed every night, praying for help.

"Dear God, I'd like my life to amount to something," Ryun said Friday, recalling the prayer.  "I believe you have a plan for my life. I'd appreciate your help in figuring it out. And if you could help me out, make a plan that would include sports of some kind. I'd really appreciate it. Thank you. Good night.

"God, indeed, did show up in a huge way," Ryun said Friday at the White House ceremony.

Ryun found distance running and through rigorous training became a world-class athlete and one of the most accomplished American runners.

Jim Ryun reacts after President Donald Trump presented the Presidential Medal of Freedom to Ryun, in the Blue Room of the White House, Friday, July 24, 2020, in Washington. (AP Photo/Alex Brandon)

He made the Wichita East High School track team as a sophomore and as a 17-year-old old junior in 1964 he became the first high schooler to clock a time of 3 minutes and 59 seconds.

Ryun went on to compete in the 1964 Olympic Games in Tokyo and break world records for the indoor half-mile and outdoor mile while at the University of Kansas. He won the silver medal at the 1968 Mexico City Olympic Games and competed in the 1972 Munich Games.

Ryun made the cover of Sports Illustrated magazine seven times -- all before the age of 25.

"When ESPN ranked the greatest high school athletes of all time, all sports, they listed Jim Ryun as number one. That's not bad for a guy who couldn't make his baseball team," Trump said.

After athletics, Ryun was a Republican member of Congress from Kansas, serving from 1996 to 2007.

His son, Ned Ryun, has been active in politics, too. He's founder and CEO of American Majority, a group that trains conservative activists.

At the ceremony, Ned honored his dad's integrity, humility and honesty and said he'd aspire to be "half the man that he is."

"In a day and age when many think it's appropriate to dishonor our flag, I will tell you, it is one of the greatest honors and privileges of my life to represent this amazing country and to wear the stars and stripes on my chest while racing in the 60s and 70s," Ryun said. "There was such pride and love of country, and I cannot tell you, Mr. President, how much I appreciate your full-throated championing of this great country."