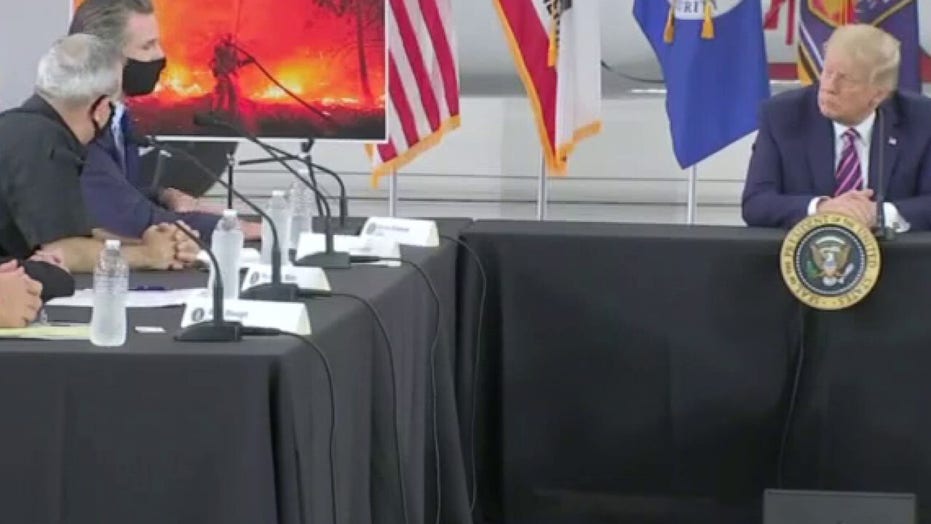 President Trump on Monday awarded the Distinguished Flying Cross to seven members of the California National Guard who helped rescue over 200 people earlier this month from the massive wildfire.

“Today we honor their courage,” Trump said during a speech at Sacramento’s McClellan Airport. “Our nation has really benefited from their bravery.”

The ceremony comes as part of Trump’s visit to California to meet with Gov. Gavin Newsom, a Democrat, and other state officials about the fires that are currently engulfing many parts of the U.S.’ most populous state.

WILDFIRES ON WEST COAST LEAVE AT LEAST 35 DEAD, EVACUEES DESCRIBE HAVING 'LOST EVERYTHING'

In California, nearly 17,000 firefighters are battling 29 major wildfires. Since mid-August, the blazes have destroyed 4,100 buildings and killed 22 people in the state. Fires have engulfed 3.3 million acres of land in California this year -- desolation greater in size than Connecticut.

The fires have killed at least 33, burned millions of acres and forced thousands from their homes on the West Coast.

Smoke from the West Coast's massive wildfires was visible as Air Force One began its approach into Northern California.

Trump’s visit also showcased the ideological differences between Trump and California lawmakers. The president has in the past blamed poor forest management for the fires, while Newsom and other lawmakers say climate change has exacerbated the situation.

During a roundtable on Monday with the president, Newsom said his state can do a better job of forest management, but told Trump that it is “self-evident that climate change is real and that is exacerbating this.”

Trump has repeatedly discounted the impact of climate change and endorsed raking forests as a means of combating wildfires.

Wade Crowfoot, secretary of the California Natural Resources Agency, told Trump that “if we ignore that science and sort of put our heads in the sand and think it’s all about vegetation management, we’re not going to succeed together in protecting California.”

Crowfoot said, “I wish science agreed with you.”

Trump got in the last word of the exchange: “Well, I don’t think science knows, actually.”