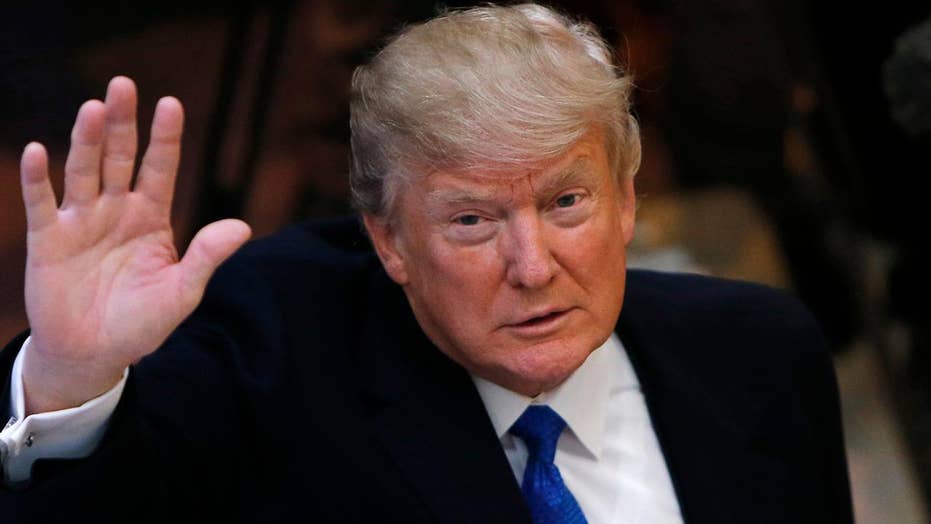 The president is pushing his strategy on the global stage.

President Trump touched down in Switzerland early Thursday, where he intends to bring his "America First" message to a skeptical - and possibly hostile - gathering of global political and business leaders at the annual World Economic Forum in Davos.

Trump, much of whose base back home views the meeting as a conference of global elitists, is expected to meet with world leaders, attend a reception, host a dinner for European business executives and give a keynote address Friday.

“We believe that isolation won’t help us. We believe we need to cooperate, that protectionism is not the answer."

Trump should not expect a warm welcome after spending much of his first year as president pushing the pro-America agenda, in rhetoric as well as trade policy. Even before his arrival, world leaders signaled veiled displeasure with the American president's policies.

German Chancellor Angela Merkel, in her address Wednesday, warned of the dangers of protectionism, and her French counterpart, Emmanuel Macron, spoke of a “shared framework” and shared responsibilities among nations.

“We are seeing nationalism, populism and in a lot of countries a polarized atmosphere,” Merkel said Wednesday, in a speech at Davos. “We believe that isolation won’t help us. We believe we need to cooperate, that protectionism is not the answer.

“Have we really learned from history, or haven’t we?”

Said Macron: “If we aren’t able to agree a standard of international cooperation, we will never convince the middle class, the working class that globalization is good for them.”

In his keynote address, Indian Prime Minister Narendra Modi named “protectionism” as a key global challenge, along with climate change and terrorism.

Merkel took a thinly-veiled swipe at Trump before his arrival

Trump also offended many from the African delegation, with his alleged recent off-the-record comment disparaging “s---hole countries,” a remark that was purportedly aimed at Haiti and nations in Africa. That has sparked speculation that some may walk out on Trump’s address, a prospect raised by Business Leadership South Africa CEO Bonang Mohale in an open letter.

Others have suggested leaving Trump’s speech in progress may make a more powerful statement.

African CEOs want Trump to acknowledge and apologize for the statement, allegedly made earlier this month in a closed door meeting with U.S. lawmakers who were discussing immigration policy.

“Will soon be heading to Davos, Switzerland, to tell the world how great America is and is doing,” Trump tweeted before his trip. “Our economy is now booming and with all I am doing, will only get better...Our country is finally WINNING again!”

In recent days the White House has been careful to communicate that "America First" does not mean "America Alone" - but whether that message is getting across to global allies remains to be seen.

Yet, he comes to the globally minded conference days after signing new tariffs to boost American manufacturers. He is expected to tout the booming economy and recent tax cut legislation.

Trump's is the first visit by a sitting president to summit in Davos since Bill Clinton appeared in 2000.

His decision to attend was a surprise, given his protectionist policies. Trump has withdrawn from the Trans-Pacific Partnership trade agreement and demanded changes to the North American Free Trade Agreement.

Reuters reported that Macron said in an interview that he pushed for Trump to attend the summit because he thinks “it’s a good thing for President Trump to explain his strategy for the U.S. and the world here in Davos.”