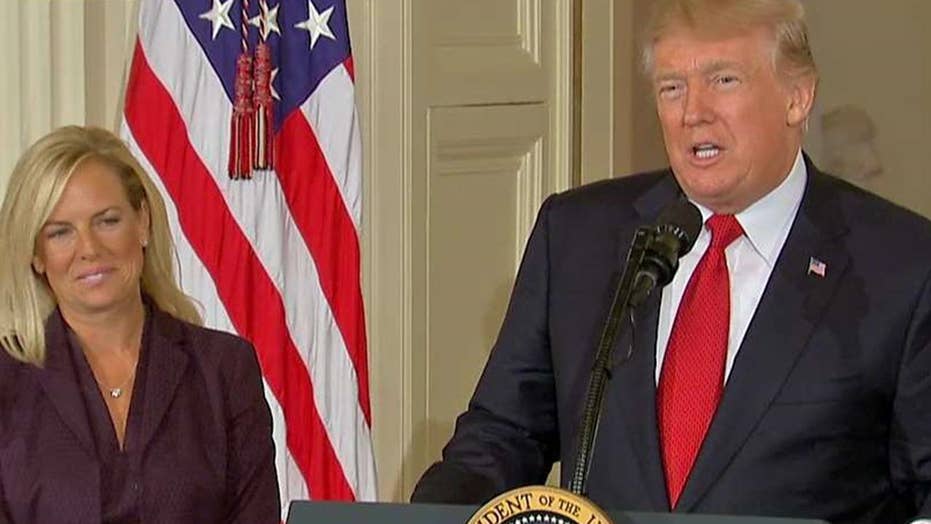 The president says Nielsen is a dedicated leader.

Trump, joined by Nielsen in the East Room of the White House, said it was “hard to imagine a more qualified candidate for this critical position.”

Trump cited Nielsen’s “great talent, knowledge and devotion” and praised her performance in her current role as White House deputy chief of staff.

“Through her wisdom and her leadership, she has won the universal respect of my entire Cabinet and senior White House staff,” Trump said.

If confirmed by the Senate, Nielsen would fill the post once held by John Kelly. Kelly served as Trump's DHS secretary for just over six months before replacing Reince Priebus as White House chief of staff over the summer.

Trump praised Kelly as well as acting DHS Secretary Elaine Duke during Thursday’s announcement, thanking her for her response to the wildfires in California and the devastating series of hurricanes.

Nielsen would be the first former DHS staffer to lead the department, which was created by former President George W. Bush in 2003.

Trump cited Nielsen’s reputation from her time at DHS as an important factor in his decision. “There, she quickly reinforced a sterling reputation as a dedicated leader whose number one priority is always the safety and security of our country and our citizens, not politics or ideology. That sets her apart,” Trump said.

Trump urged the Senate to look at Nielsen’s qualifications, calling for a quick confirmation. “In light of the serious threats facing our country and the urgent disaster recovery efforts, I call upon the Senate to put politics aside and confirm this tremendously qualified and talented nominee with a strong bipartisan vote.”

Nielsen had served as Kelly's deputy at DHS and followed him to the White House when he replaced Priebus. Her departure leaves Kelly looking to fill another crucial administrative vacancy.

Nielsen, speaking after the president, said it was a “privilege” to have served in the administration.

“I share the president’s profound commitment to the security of our country and safety of the American people,” Nielsen said.

The White House first announced the president’s plans to nominate Nielsen in a statement Wednesday night.

Rep. Bennie G. Thompson, D-Miss., the ranking member of the Committee on Homeland Security, said in a statement he was pleased the president had made a decision on filling the post "after letting the critical national security position remain vacant as the nation faced multiple major hurricanes and a domestic terrorism attack."

But Thompson said he had questions about the nominee’s background, including her past work for the Bush administration.