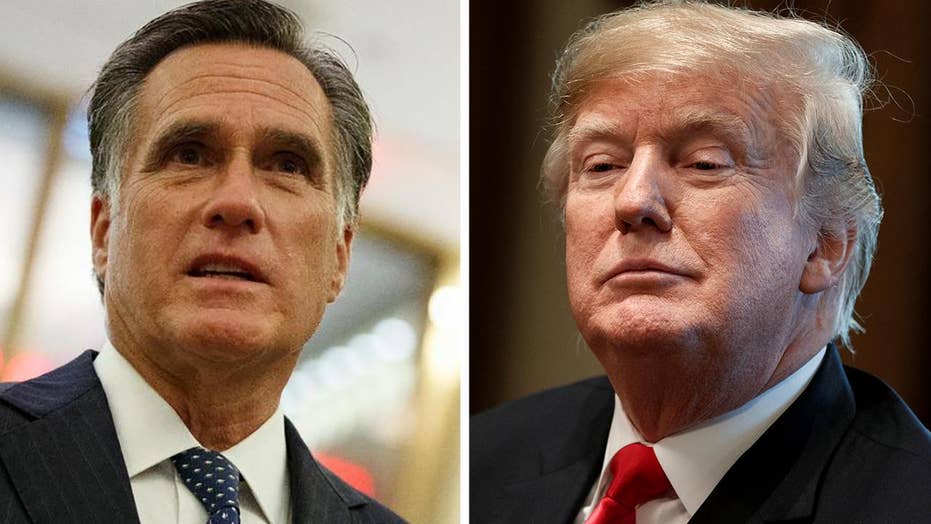 The days when President Trump sang Mitt Romney's praises are long gone, as the pair — who previously appeared to support each other's political values — have recently turned on one another by publicly exchanging insults and blasting each other's campaigns.

Romney kicked off 2019 by publishing a scathing op-ed in The Washington Post criticizing Trump's character and declaring he has "not risen to the mantle of the office."

"Policies and appointments are only a part of a presidency. A president must also unite us, inspire us, and defend our vital institutions," Romney tweeted on Jan. 1, along with a link to the article. In the piece, he critiqued the recent flurry of departures from the White House, most recently Defense Secretary James Mattis.

Naturally, the criticism sparked a quick response from the president who questioned whether the Utah senator-elect will be a "Flake" as he enters Congress.

"I hope not. Would much prefer that Mitt focus on Border Security and so many other things where he can be helpful. I won big, and he didn’t. He should be happy for all Republicans. Be a TEAM player & WIN!" Trump tweeted on Jan. 2.

As the feud continues, here's a look at some of Romney and Trump's (tumultuous) relationship highlights.

When Romney defeated his Senate opponent state Rep. Mike Kennedy in a June primary runoff, Trump was quick to offer some praise.

“Big and conclusive win by Mitt Romney. Congratulations! I look forward to working together - there is so much good to do. A great and loving family will be coming to D.C.," Trump tweeted on June 26. 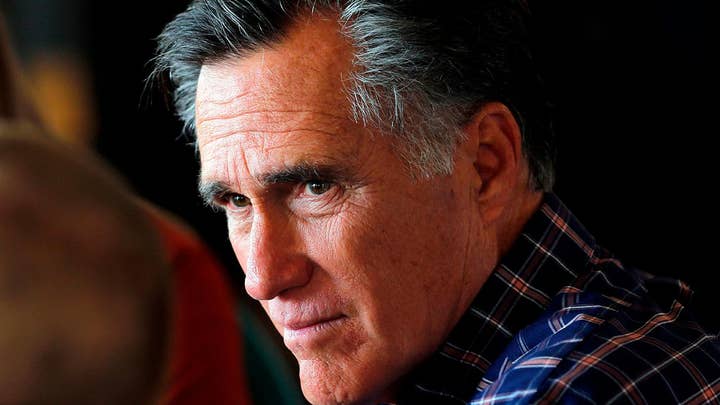 In a closed-door tech summit in Utah in June, Romney told the room he thinks Trump will “solidly” win re-election in 2020, reports said.

ROMNEY PREDICTS A TRUMP WIN IN 2020

"I think that not just because of the strong economy and the fact that people are going to see increasingly rising wages, but I think it's also true because I think our Democrat friends are likely to nominate someone who is really out of the mainstream of American thought and will make it easier for a president who's presiding over a growing economy," Romney said.

In an op-ed for The Salt Lake Tribune in June 2018, Romney showed some appreciation for the president's policies, admitting his first year in office "exceeded [his] expectations."

"He made our corporate tax code globally competitive, worked to reduce unnecessary regulations and restored multiple use on Utah public land. In addition, I am pleased that he backed away from imposing a 35 percent tariff on all foreign goods," Romney wrote at the time.

"I believe that when you are known as a member of a 'team,' and the captain says or does something you feel is morally wrong, if you stay silent you tacitly assent to the captain’s posture."

However, Romney noted that he has had plenty of disagreements with Trump's decisions as well — such as his stance on the Trans-Pacific Partnership (TPP) and broad-based tariffs.

"People ask me why I feel compelled to express my disagreements with the president. I believe that when you are known as a member of a 'team,' and the captain says or does something you feel is morally wrong, if you stay silent you tacitly assent to the captain’s posture," Romney explained.

Trump backed Romney's bid for a Senate seat in Utah, saying he "has my full support and endorsement" back in February 2018.

Romney "will make a great Senator and worthy successor" to the retiring Orrin Hatch, Trump added.

In response, Romney tweeted, "Thank you Mr. President for the support. I hope that over the course of the campaign I also earn the support and endorsement of the people of Utah."

Romney told the Deseret News that he "wrote in the name of a person who I admire deeply, who I think would be an excellent president" in the 2016 presidential election — his wife, Ann.

"I realized it wasn't going to go anywhere, but nonetheless felt that I was putting in a very solid name," he told the newspaper.

Romney voiced his support for Trump's Republican rival, Sen. Ted Cruz, in March 2016. In the Utah nominating caucus, Romney said he'd vote for Cruz, despite Trump being the clear front-runner of his party.

“Today, there is a contest between Trumpism and Republicanism. Through the calculated statements of its leader, Trumpism has become associated with racism, misogyny, bigotry, xenophobia, vulgarity and, most recently, threats and violence. I am repulsed by each and every one of these,” Romney wrote in a Facebook post at the time.

“The only path that remains to nominate a Republican rather than Mr. Trump is to have an open convention,” he added.

Trump replied to Romney's lengthy statement, calling him a "mixed up man" who "doesn't have a clue."

In February 2016, Trump called Romney "one of the dumbest and worst candidates in the history of Republican politics" after the politician called on the then presidential hopeful to release his tax returns.

Romney dubbed Trump a "phony" and a "fraud" in March 2016, saying his campaign promises are "as worthless as a degree from Trump University."

"If Trump had said 4 years ago the things he says today about the KKK, Muslims, Mexicans, disabled, I would NOT have accepted his endorsement," he tweeted.

Days later, Trump called Romney a "disaster candidate who had no guts," adding that he's a "total joke."

Trump applauded Romney during the 2012 presidential election, asking his Twitter followers to get out and vote for the former Massachusetts governor.

"Make sure you get out and vote...most important election of our generation...go Romney!" Trump tweeted on Nov. 6, 2012.

He vowed to be with Romney on the big night.

"I was invited to be with Mitt Romney tonight --- win, lose, or draw, I’ll be there!" Trump promised.