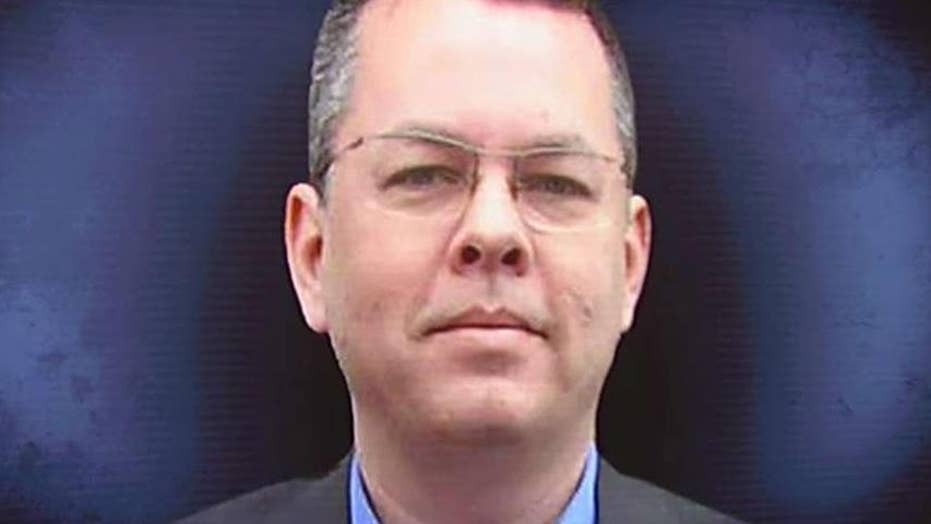 Detention of US pastor escalates rhetoric with Turkey

War of words between Presidents Trump and Erdogan over the detainment of Pastor Andrew Brunson; Connor Powell has the latest from Jerusalem.

The Treasury Department sanctions, first announced by the White House, target Turkey's minister of justice and minister of interior over the holding of the 50-year-old pastor.

“Pastor Brunson’s unjust detention and continued prosecution by Turkish officials is simply unacceptable,” Treasury Secretary Steven Mnuchin said in a statement. “President Trump has made it abundantly clear that the United States expects Turkey to release him immediately.”

The administration said the two sanctioned officials -- Turkey's Minister of Justice Abdulhamit Gul and Minister of Interior Suleyman Soylu -- both played leading roles in the organizations responsible for Brunson's arrest and detention. The sanctions effectively block any property or interest in property controlled by them in the U.S., and bar Americans from engaging in transactions with them.

Brunson, an evangelical pastor, was arrested in December 2016 and jailed. He was recently released to home detention.

In Ankara, Turkey called on the U.S. to reverse its decision and promised to "respond in kind without delay" against what it described as an aggressive stance by the Trump administration. It did not elaborate on possible measures.

Turkey President Recep Tayyip Erdogan earlier warned the U.S. not to impose sanctions against his government. Late Saturday, Turkish media quoted Erdogan as saying that Washington "cannot make Turkey back down with sanctions."

The pastor, who is originally from Black Mountain, N.C., has lived in Turkey for 23 years and led Izmir Resurrection Church.

Brunson was detained in the aftermath of a failed 2016 coup on charges of "committing crimes on behalf of terror groups without being a member" and espionage. He faces a prison sentence of up to 35 years if he is convicted on both counts at the end of his ongoing trial.

"Pastor Andrew Brunson is an innocent man. He’s a man of profound Christian faith, who has ministered in Turkey for more than 20 years ... There's no credible evidence of any wrongdoing against him," Pence said.