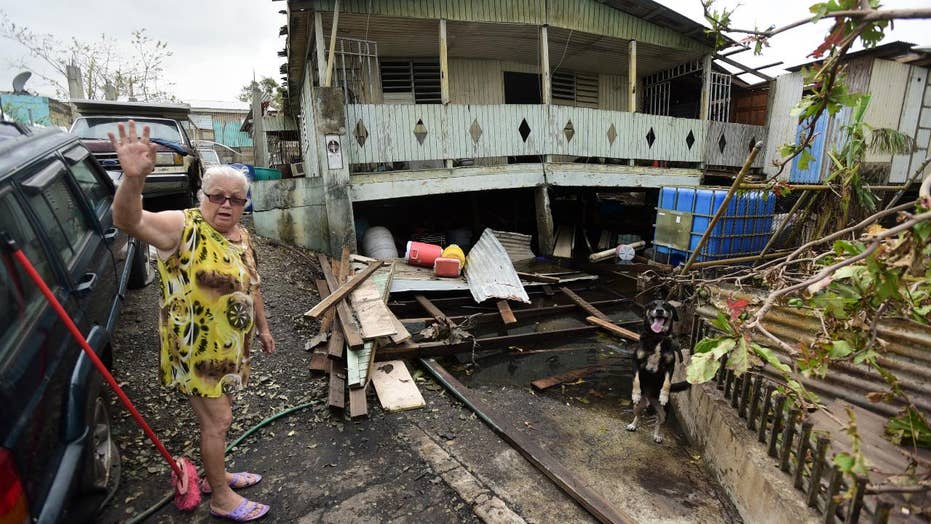 President Donald Trump on Thursday declared relief efforts for Puerto Rico are succeeding, nine days after Hurricane Maria hit -- despite critics' claims that people on the island have been waiting too long for aid.

The president cleared the way Thursday for more supplies and tweeted that relief was indeed getting through.

Trump issued a 10-day waiver of federal restrictions on foreign shipments of cargo to the island. And, House Speaker Paul Ryan said the Federal Emergency Management Agency’s disaster relief account would get a $6.7 billion boost by the end of the week.

On Friday, Trump again defended the government's response and said "big decisions" will have to be made.

The developments unfolded after Trump came under sharp criticism for what critics said was a too-slow response to a humanitarian crisis among Puerto Rico’s 3.4 million residents.

“FEMA & First Responders are doing a GREAT job in Puerto Rico. Massive food & water delivered. Docks & electric grid dead. Locals trying,” Trump tweeted Thursday night, “...really hard to help but many have lost their homes. Military is now on site and I will be there Tuesday. Wish press would treat fairly!”

Trump and his advisers defended the administration’s response to the hurricane, which destroyed much of the island’s infrastructure and left many residents desperate for fresh water, power, food and other supplies.

Tom Bossert, Trump’s homeland security adviser, told Fox News' “Special Report” the impression of a slow response isn’t so much wrong as it is outdated. He said more than 40 of the island’s 69 hospitals were now accepting patients.

“Old reporting or old b-roll footage running from earlier today tends to give a bad impression. It wasn't wrong at the time it was recorded. It just ends up being dated and inaccurate, so that's the challenge for all of us,” Bossert told Bret Baier.

“The electric power grid in Puerto Rico is totally shot. Large numbers of generators are now on Island. Food and water on site,” Trump tweeted early in the day.

But in many cases “on site” meant stored on pallets and in containers in sea- and airports far from the towns where Puerto Ricans desperately lined up for fresh water and pre-made meals being distributed by federal officials.

Acting Homeland Security Secretary Elaine Duke said she signed the waiver of a federal law to clear the way for foreign-flagged ships to deliver supplies between U.S. ports. The nearly century-old measure, known as the Jones Act, has bolstered the U.S. shipping industry but made consumer goods much pricier and scarcer in this U.S. territory than on the mainland.

“You are seeing devastation in Puerto Rico. That is the fault of the hurricane,” Duke told reporters in the White House driveway. “The relief effort is under control.”

The Trump administration initially said a waiver was not needed for Puerto Rico because there were enough U.S.-flagged ships available to ferry goods to the island.

Meanwhile, the U.S. military was sending a three-star general to Puerto Rico to help direct the hurricane response. Lt. Gen. Jeff Buchanan, commander of U.S. Army North, was to arrive later Thursday to assess the situation so that the military can provide the highest level of support for the disaster, Northern Command spokesman John Cornelio said.

He said there were still problems getting supplies and aid to residents on the island, where 12 of the 29 bridges that have been assessed were closed, and another 65 were damaged.

The Department of Homeland Security’s acting administrator of the region that includes Puerto Rico said that distribution had been hampered by the destruction of roads and bridges, which made it hard to get supplies to those in need.

“In addition to building that first line of the supply chain, we are also rebuilding the entire distribution system ... how we’re going to deliver commodities and resources to the people of Puerto Rico,” acting administrator John Rabin told reporters in the capital, San Juan. “We have often had to recreate the system in order to deliver food, water and commodities throughout the island.”

And FEMA Administrator Brock Long said the efforts have been hampered by damaged airports and ports on the island.

“The question is that last mile,” said Long, speaking of the difficulty of getting aid all the way to those in need.

Meanwhile, Ryan announced that the Federal Emergency Management Agency’s disaster relief account would get “a huge capital injection” of $6.7 billion by the end of the week to help Puerto Rico recover. He noted that Trump had waived a matching funds requirement, which means the cash-strapped island won’t have to contribute to the initial costs of the federal assistance. The Wisconsin Republican said he expects the Trump administration to send Congress a request for a long-term recovery package once damage assessments are conducted.

“We will quickly act on that request,” Ryan said.

Outside the capital, San Juan, residents, though, were very much in doubt.

“I have not received any help, and we ran out of food yesterday,” said Mari Olivo, a 27-year-old homemaker whose husband was pushing a shopping cart with empty plastic gallon jugs while their two children, 9 and 7, each toted a large bucket. They stood in line in a parking lot in the town of Bayamon on the hard-hit northern coast, where police used hoses to fill up containers from a city water truck.

“I have not seen any federal help around here,” said Javier San Miguel, a 51-year-old accountant.

Bayamon Mayor Ramon Luis Rivera told The Associated Press that FEMA officials sent a truck with a limited amount of food on Monday. Rivera said he began distributing it to hard-hit rural areas.

“I don’t wait,” he said when asked whether federal officials helped with distribution.