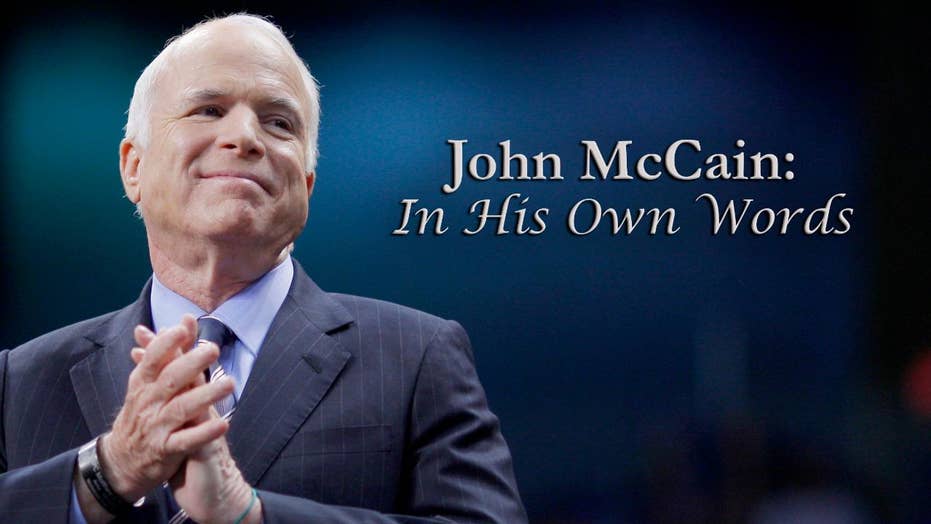 John McCain: In his own words

Arizona Senator John McCain inspired the nation with his character, heroism, humility and public service. Here’s a look back at some of the

Following the death of Sen. John McCain on Saturday, tributes poured in from both Republicans and Democrats as well as family for the war hero who survived five years as a prisoner of war but finally succumbed to brain cancer.

The wife of Sen. McCain, Cindy McCain, said on Twitter “My heart is broken.”

“I am so lucky to have lived the adventure of loving this incredible man for 38 years.” She said that he died at home, in the way that he lived his life, “on his own terms, surrounded by the people he loved.”

McCain’s daughter, Meghan, said in a statement that now that her father had passed,“the task of my lifetime is to live up to his example, his expectations, and his love.”

President Trump, who had a tumultuous relationship with the Republican senator, shared his “deepest sympathies” for the McCain family over Twitter, adding that his “hearts and prayers are with you.”

Vice President Mike Pence tweeted that his family is sending condolences to the McCain family, and said, "We honor [McCain's] lifetime of service to this nation in our military and in public life."

Sen. Lindsey Graham, R-S.C., recalled the loss of “one of my dearest friends and mentor.”

“America and Freedom have lost one of her greatest Champions,” he said.

Graham said that he would “need time to absorb this” but that the McCain family “are in my prayers.”

“Although it was clear that John McCain’s life was ending, his death today hurts," Lieberman said. "America has lost one of the greatest patriots and public servants in our history. And I have lost a dear friend."

"America has lost one of the greatest patriots and public servants in our history. And I have lost a dear friend."

"Words cannot express the sorrow I feel at John McCain's passing," wrote Republican Sen. Jeff Flake, of Arizona. "The world lost a hero and a statesman. Cindy and the McCain family have lost a loving husband and father. I have lost a wonderful friend."

President Barack Obama, who ran against McCain for the presidency in 2008, said that Americans remain in the former senator’s debt because of all that he did for the country.

“John McCain and I were members of different generations, came from completely different backgrounds, and competed at the highest level of politics,” Obama said. “But we shared, for all our differences, a fidelity to something higher – the ideals for which generations of Americans and immigrants, alike have fought, marched, and sacrificed.”

“Few of us have been tested the way John once was, or required to show the kind of courage that he did,” Obama stated. “But all of us can aspire to the courage to put the greater good above our own. At John’s best he showed us what that means.”

“John McCain was a man of deep conviction and a patriot of the highest order. He was a public servant in the finest traditions of our country.”

"John McCain believed that every citizen has a responsibility to make something of the freedoms given by our Constitution, and from his heroic service in the Navy to his 35 years in Congress, he lived by his creed every day," Clinton wrote.

Former President George H.W. Bush wrote that McCain "was a patriot of the highest order."

"Few sacrificed more for, or contributed more to, the welfare of his fellow citizens — and indeed freedom-loving peoples around the world," Bush wrote.

"Few sacrificed more for, or contributed more to, the welfare of his fellow citizens — and indeed freedom-loving peoples around the world."

“Americans will be forever grateful for his heroic military service and for his steadfast integrity as a member o the United States Senate.”

McCain, according to Senate Majority Leader Mitch McConnell, "showed us that boundless patriotism and self-sacifice are not outdated concepts or clichés, but the building blocks of an extraordinary American life."

"It's an understatement to say the Senate will not be the same without our friend John," McConnell said. "I will treasure the many memories we've shared together through the years."

House Speaker Paul Ryan called it “a sad day for the United States.”

“Our country has lost a decorated war hero and statesman … he was one of the most courageous men of the century,” he said in a statement.

“Our country has lost a decorated war hero and statesman. … He was one of the most courageous men of the century.”

House Minority Leader Nancy Pelosi, D-Calif., remembered McCain as an “undaunted spirit” who "dedicated his life to defending both America and the American idea.”

“He never forgot the great duty he felt to care for our nation’s heroes, dedicating his spirit and energy to ensuring that no man or woman in uniform was left behind on the battlefield or once they returned home,” she said both of his military career and political career.

Senate Minority Leader Chuck Schumer, D-N.Y., called McCain one of “few truly great people” you encounter in life. He announced that he would be introducing a resolution to rename the Russell Senate Office Building after the late McCain.

Defense Secretary James Mattis said that McCain, as a U.S. Naval officer and a “defiant prisoner of war,” was a man “who steadfastly represented the best ideals of our country” and was “passionately committed” to the U.S.

Mattis said the Department of Defense “will remain forever grateful for the life, the passion, and the example of Senator John McCain.”

"As we mourn his passing and celebrate his truly phenomenal life," Ducey added, "we're also faced with the void John McCain's absence leaves in the heart and soul of our nation."

Former Arizona Gov. Jan Brewer wrote that McCain's death was "heartbreaking news." She called McCain "a warrior who fought for his country and for his beloved state of Arizona."

Former Alaska Gov. Sarah Palin, who was McCain's running mate in 2008, said that on Saturday, the world “lost an American original.”

Palin said McCain “was a maverick and a fighter, never afraid to stand for his beliefs … and through sacrifice and suffering he inspired others to serve something greater than self.”

“I will remember the good times,” Palin added.