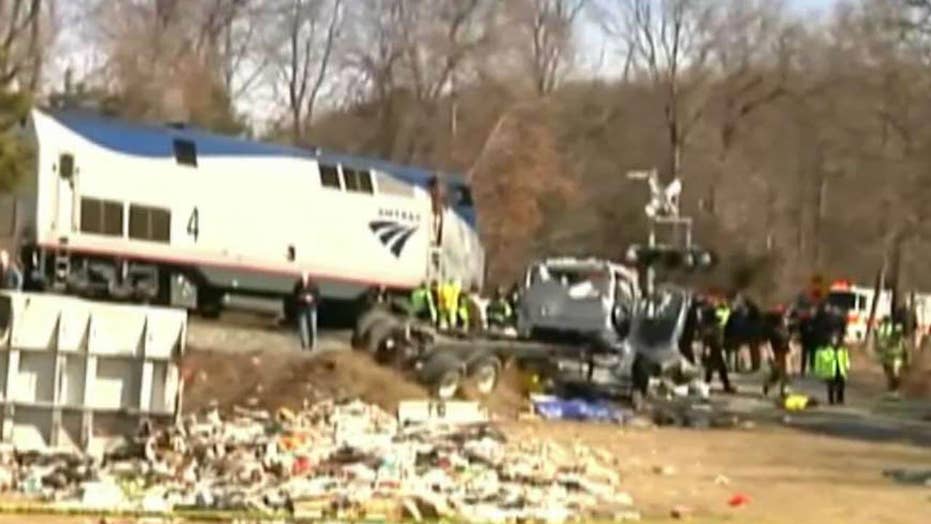 The Amtrak train carrying Republican lawmakers to a retreat collided with a garbage truck on the tracks; Peter Doocy has more for 'Special Report.'

There is no normal on Capitol Hill.

But the bizarre, the “news of the weird,” routinely devours all on Capitol Hill. If Congress is involved in something normal, you can bet that somehow, in some unforeseen fashion, the mundane will stunningly warp into the malignant.

Recall when a mailman, in April 2015, pierced all of downtown Washington’s air defenses and piloted a gyrocopter onto the West Front of the Capitol to protest big money in politics. Just an ordinary day until he showed up.

Few can think of anything more American than an early-morning baseball practice on a hot June morning – until a crazed gunman showed up behind third base and started shooting. The assailant shot House Majority Whip Steve Scalise, R-La., two Capitol Police officers, a House aide and a lobbyist last summer.

Former Rep. Gabrielle Giffords was about to hold a meet-and-greet with constituents in a supermarket parking lot in January, 2011. Another gunman shot her, wounded two congressional aides and killed another one. Six died in the melee.

For years Congress has grappled with metaphorical train wrecks. It’s a phrase steeped in the parliamentary vernacular to describe epic legislative confrontations that “spill off the tracks.” Government shutdowns. Debt ceiling debacles.

Now there was a real one.

Dana Loesch sounds off on 'Fox & Friends' and reacts to Democrats' criticism of Trump's State of the Union.

A specially chartered Amtrak train crashed Wednesday into a garbage truck in rural Virginia as it shuttled congressional GOPers to their annual issues retreat at the Greenbrier Resort in White Sulphur Springs, W.Va. The accident killed a passenger in the truck, Christopher Foley, 28, of Louisa County, Va.

The House GOP Conference is known for its “Doctor’s Caucus,” a number of members who are practicing medical professionals. Many of them were on the train and sprang into action: Reps. Brad Wenstrup, R-Ohio; Roger Marshall, R-Kan.; Phil Rowe, R-Tenn.; Larry Bucshon, R-Ind.; Michael Burgess, R-Texas; and Sen. Bill Cassidy, R-La.

Wenstrup says he and Rowe split up to attend to the injured and try to save the truck passenger. Marshall performed CPR but said he “was gone.” House Chaplain Fr. Patrick Conroy administered last rites.

Wenstrup served in Iraq as a military combat surgeon. Republicans credit Wenstrup with saving the life of Scalise the morning he was shot. And for the second time in less than a year, Wenstrup was pressed into service while doing routine things with his House colleagues: playing baseball and riding a train.

Sen. Cassidy on rushing to aid of injured in train crash

Those juxtapositions reveal just how strange the congressional experience can be.

“Brad was cutting away (the victim's) jacket to use as lifesaving equipment. Six months ago, he was doing the same thing on a baseball field,” said Sen. Jeff Flake, R-Ariz. “I thought after that time, I never want to experience that again. But it came too soon.”

“In June we had to wait until the shooting stopped,” said Wenstrup when asked about responding today compared to the baseball practice. “Today we were able to react immediately.”

It’s surreal that Wenstrup has the opportunity to contrast the experiences.

Who would think that the story of the day would center on what happened to lawmakers on a train just hours after President Trump’s State of the Union address?

This is the second consecutive year where people have died amid efforts to transport lawmakers to their policy retreats.

On Jan. 25, 2017, Senate Democrats boarded buses bound for Shepherdstown, W.Va., in the state’s eastern panhandle. U.S. Capitol Police and Maryland State Police escorted the buses up I-270 from Washington. Police blocked traffic at the interchange between I-270 and I-70 near Frederick to allow the Senate Democratic motorcade to pass. Two dump trucks stopped on I-70, followed by a SUV. A third dump truck then smashed into the SUV, sandwiching that vehicle between the other dump trucks. A fireball swelled from the SUV, engulfing the vehicles.

The motorcade stopped as senators, U.S. Capitol Police and others from the Senate Sergeant at Arms Office piled out to help.

The driver of the SUV died.

On Wednesday, Senate Democrats quietly conducted their policy retreat just down the road from Washington, at Mount Vernon. It appeared to be uneventful – as far as anyone could tell. But you never know around here.

There is no normal in the halls of Congress.

The House Intelligence Committee released the transcript of its meeting Monday where members voted to publicize a controversial memo about alleged Justice Department abuses.

And on Capitol Hill, the train wreck will be the story – until something weirder than a train wreck happens.