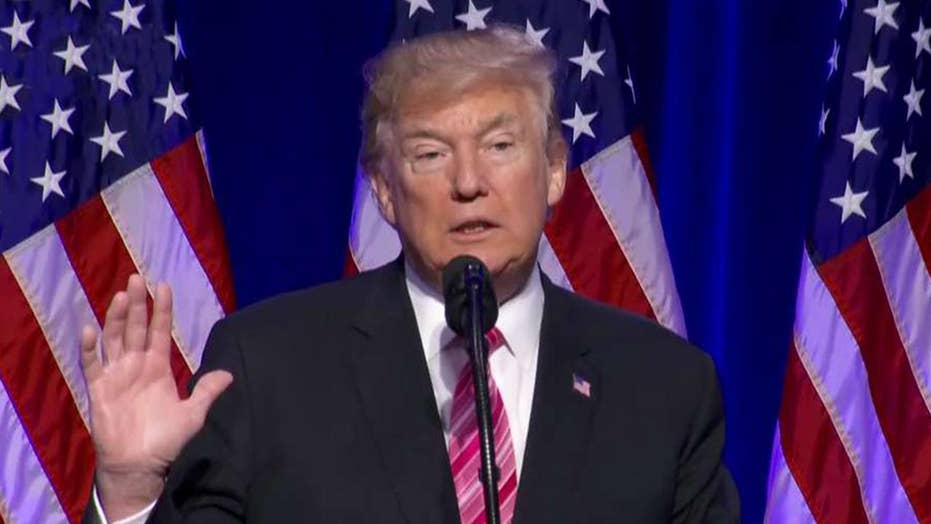 The president speaks in Mississippi after touring civil rights museum.

President Trump attended the opening of the Mississippi Civil Rights Museum on Saturday, telling visitors the venue honors “the brave men and women who sacrificed so much” for freedom.

“We are here to honor the fight to end slavery … to join the right to vote and to gain birth-right equality.”

“We are here to honor the fight to end slavery … to join the right to vote and to gain birth-right equality,” Trump said in brief, subdued speech.

Trump’s planned visit to the museum and the adjoining Mississippi history museum in Jackson sparked days of controversy -- including protests and boycotts from civil right leaders like Rep. John Lewis, D-Ga., and others who have raised concerns about the president’s comment and actions toward women, African-Americans and others.

"After President Trump departs, we encourage all Mississippians and Americans to visit this historic civil rights museum.”

The White House earlier this week said it was disappointed that Lewis and others wouldn’t join the president at the museum to honor “the incredible sacrifice civil rights leaders made to right the injustices in our history.”

The president tweeted after touring the museum and speaking: "It was my great honor to celebrate the opening of two extraordinary museums ... . We pay solemn tribute to our heroes of the past & dedicate ourselves to building a future of freedom, equality, justice & peace."

According to the White House, the civil rights museum has eight interactive galleries that highlight the struggle for freedom and shares stories about the Mississippi movement that changed the nation. It “aims to promote greater understanding of the systematic oppression of black Mississippians and their fight for equality that transformed the state and nation,” the White House said.