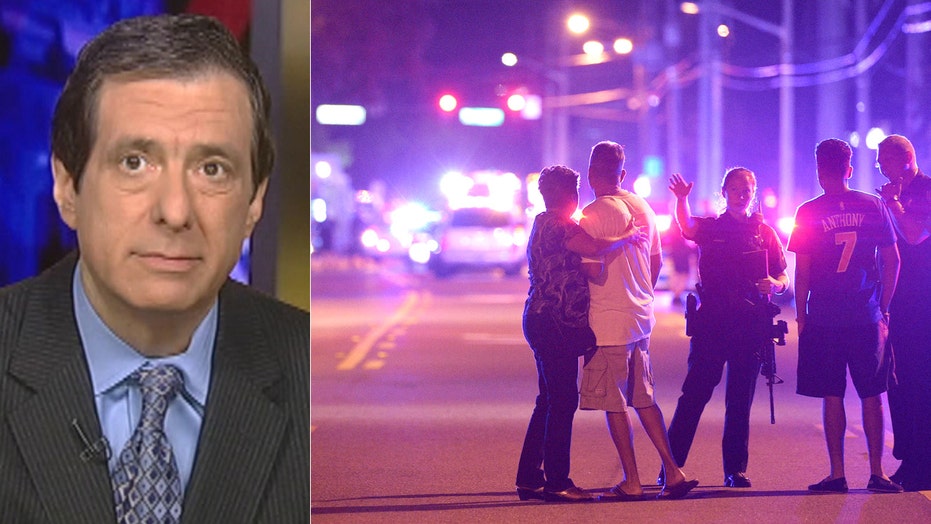 Donald Trump and Hillary Clinton each struck a very different tone yesterday in response to the Orlando massacre.

Trump, calling into several morning shows, said Hillary Clinton should drop out of the race if she can’t bring herself to use the phrase radical Islamic terrorism. He said President Obama should resign unless he too could utter those words.

In a New Hampshire speech, Trump said of Clinton: “She has no clue, in my opinion, what radical Islam is…She’s in total denial.” He also said, overstating Clinton’s position, that “she says the solution is to ban guns,” “disarm law-abiding Americans” and abolish the Second Amendment, and that he plans to meet with the NRA.

Clinton gave a speech in Cleveland in which she did not mention Trump’s name. She called for an “intelligence surge” to catch murder-minded lone wolves, and repeated her call for stricter gun control. She did, after being challenged by Trump, use the phrase “radical Islam,” which she generally avoids.

One candidate vowing to shake up a terrible system, the other calling for unity and bipartisanship: that’s the campaign in a microcosm. But it didn’t end there.

What riled up Trump’s detractors were these comments on “Fox & Friends” about Obama: “We're led by a man that either is, is not tough, not smart, or he's got something else in mind. And the something else in mind, you know, people can't believe it. People cannot — they cannot believe that President Obama is acting the ways he acts and can't even mention the words radical Islamic terrorism. There's something going on. It's inconceivable."

What was Trump insinuating? It’s certainly fair to criticize that line of attack, given that the billionaire became a high-profile voice in the “birther” movement five years ago. But it led to this remarkably unfair headline in the Washington Post:

In an earlier call to the “Today” show, Clinton called Trump “obsessed with name-calling” and spoke of how she had worked with a Republican president, governor and mayor after 9/11.

The day of dueling speeches underscored how each political party is trying to seize control of the debate. But the heinous attack in Orlando doesn’t entirely fit either presidential candidate’s narrative.

It was inevitable that the worst mass shooting in American history, coming in the midst of the 2016 campaign, would become political fodder in a country that has suffered too many tragedies of this nature.

Before proceeding, I plan to follow the lead of FBI Director James Comey in refusing to use the killer’s name, as some journalists have done after past shootings. The point is to send a signal to other potential terrorists and crazy people that such violence won’t be followed by the eternal infamy they crave.

Clinton, in her initial statements on Orlando, spoke of the need to strengthen gun control. But the killer had a Florida gun license and bought his AR-15 rifle legally, so stricter background checks or gun-show restrictions would not have prevented him from acquiring the weapon.

Trump, in his initial statements, referred again to his plan to temporarily ban Muslims from entering the United States. But the killer was an American citizen already living here and would not have been affected by such a ban.

There is, quite obviously, no one-size-fits-all approach to combating the scourge of terrorism, especially in an era when a lone wolf like this killer can announce his allegiance to ISIS and inflict mass casualties without the command and control of the terrorist organization.

But the responses of Trump and Clinton will resonate with many voters, even if the specifics don’t match what happened at the Pulse nightclub.

When Trump argues that Muslim immigrants must be banned for now because federal authorities can’t effectively screen them, well, the killer was a Muslim of Afghan descent who had become radicalized. Trump’s pitch is that there are many more radical Islamic extremists just like this killer who would love to get inside this country’s borders and wreak havoc.

And while he is making that case, Hillary Clinton and President Obama would not call the murder of 50 people Islamic terrorism. I have never fully understood their reluctance to do so. Trump pounced on the issue, saying the president should resign and Clinton should quit the race unless they are willing to use those words.

Clinton told the “Today” show that it is pointless to argue over labels, that she has referred to radical jihadists and radical Islam, but that she doesn’t want to smear an entire religion because of those who pervert it for violence.

In a similar vein, when Clinton and Obama renewed their call for tighter gun controls, that will appeal to those who believe deadly weapons are too readily available in America, even if such laws would not have stopped this killer. Some people will wonder how a guy who was under FBI investigation for possible ties to terror was able to legally purchase an assault-style rifle and a handgun.

The Washington Post noted that assault-style rifles have been used in 14 public mass shootings over the last decade, half of them since last June. Bill Clinton successfully pushed for a ban on such weapons in 1994, but Congress let the ban expire in 2004, during the Bush administration.

One other undeniable factor is that this killer, reflecting radical Islam’s hatred of homosexuality, targeted a gay bar. Most of the gay community has been in the Democratic fold, with Clinton and Obama, among others, reversing their earlier positions and strongly backing same-sex marriage.

Trump, unlike some Republicans, said the killer had targeted the Orlando nightclub “in order to execute gay and lesbian citizens because of their sexual orientation.” He said Clinton could “never claim to be a friend of the gay community” as long as she backs immigration policies that allow Islamic extremists to slip into this country.

Earlier, Trump drew some flak on Sunday for tweeting: “Appreciate the comments for being right on radical Islamic terrorism. I don’t want congrats, I want toughness and vigilance.” In another tweet he said: “I said this was going to happen- and it is only going to get worse.”

It probably would have been better if Trump had let one of his aides or surrogates make those points, as he seemed to make it about himself. Politico said the Orlando attack “exposed Donald Trump’s penchant for behaving reality-show small during moments that historically demand the stature of a president.”

But is the press holding Trump to a different standard? A New York Times story led off yesterday by saying Trump “sought to capitalize on a mass shooting,” and demonstrated “his willingness to flout convention and engage in a style of demagogic politics rarely displayed by a presidential nominee.”

Okay. But the story later noted that Clinton, after initially responding with restraint, said that “we need to keep guns like the ones used last night out of the hands of terrorists or other violent criminals.”

Is that not “capitalizing” on a mass shooting as well? Clinton effectively used the gun control issue against Bernie Sanders in the primaries. And Obama has openly said after Newtown and other mass shootings that he wants to seize the moment to pass tougher gun legislation.

That, after all, is how the 1968 gun control law was passed, after the assassinations of Bobby Kennedy and Martin Luther King Jr.

Others are just interested in playing the blame game. New York's increasingly left-wing Daily News, which wants assault weapons banned, blared this insensitive headline on the cover: "THANKS, NRA."

With the country still numb from the shock of so many innocent people slaughtered in Florida, there is also a weariness that sets in as each political party reprises its standard attack lines on terror, guns and immigration. But it’s not reasonable to expect either Trump or Clinton to refrain from addressing what has sadly become the new normal in the age of terror.