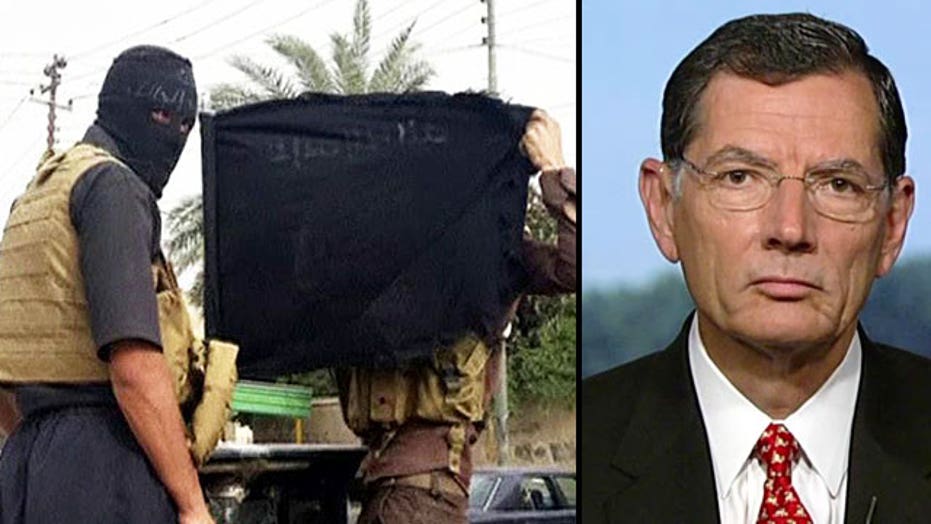 Sen. Barrasso: ISIS' target is the United States of America

Republican senator wants to hear a plan from the president

Top congressional Republicans on Sunday put the responsibility on President Obama to call Congress back to Washington for a vote on the use of U.S. military force to attack and destroy the Islamic State in Iraq and Syria.

“I'd bring the Congress back," House Speaker John Boehner said on ABC's "This Week.” "The president, typically in a situation like this, would call for an authorization vote and go sell that to the American people and send a resolution to the Hill. The president has not done that."

“The president has an obligation to call us back,” Barrasso, chairman of the Senate's Republican Policy Committee, told “Fox News Sunday.” “The public deserves it. They demand it.”

He also suggested that Senate Majority Leader Harry Reid won’t allow such a vote because it could hurt fellow Democrats in tough re-election bids and cost his party control of the upper chamber.

“No member of Congress should be let off the hook,” Barrasso argued.

Boehner also said he thinks the United States will eventually have to use combat troops to augment the U.S.-led airstrikes on Islamic State targets in both countries.

“At some point, somebody's boots have to be on the ground,” Boehner said. "We have no choice. These are barbarians. They intend to kill us.”

The president, in ordering the airstrikes in late August, ruled out using U.S. combat troops, choosing to rely instead on Iraqi forces, Kurdish fighters and soon-to-be trained Syrian rebels for the ground campaign.

Congress essentially agrees that the White House has the authority to use military force, based on two congressional resolutions following the Sept. 11, 2001, terror attacks.

However, Boehner and Barrasso also got support for congressional debate and a potential vote from Independent Sen. Angus King, who often caucuses with Senate Democrats.