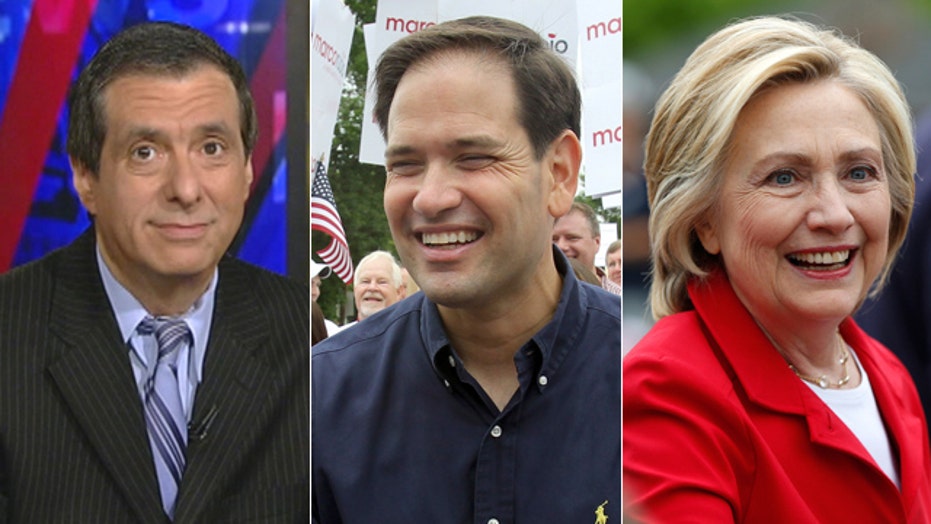 Kurtz: Why candidates beat the press

Marco Rubio rips the New York Times for reporting he’s not too popular in his parents’ homeland of Cuba.

Chris Christie hits the Times and MSNBC for hyping the Bridgegate scandal and says the “liberal media” owe him an apology.

Scott Walker, who gets into the race next week, accused reporters of asking “gotcha questions” and refused to answer some of them.

Ted Cruz told me that most journalists are hopelessly biased and portray Republicans as stupid, evil or in his case, crazy.

And Donald Trump told me in the interview that aired Sunday that “I believe in punching back” against the media, as he has by calling certain journalists losers, clowns and dumb as a rock.

The press has become quite the piñata in the 2016 campaign, a fat target for candidates eager to score points against our unpopular business—or just to vent their frustrations.

Does it work? It certainly doesn’t hurt in a Republican primary. But at some point candidates have to figure out how to use the press to sell their message, rather than just complaining.

Even Hillary Clinton has decided to start doing national television interviews after a long drought, as I was the first to report on Sunday night. Communications director Jennifer Palmieri told me that by keeping the media at arm’s length, “we’re sacrificing the coverage. We’re paying a price for it…The more media interviews you do, the less any one interaction matters.” A media blitz could help erase the embarrassing image of Hillary aides using ropes to literally lasso reporters and keep them moving during a July 4 parade in New Hampshire.

In the latest sparring, Rubio was reacting to this Times story, which says “the first Cuban-American to have a plausible chance to become president of the United States is the island’s least favorite son.” This is hardly shocking because the Florida senator opposes the Obama administration’s decision to normalize relations with Cuba.

But I found the piece fair, because the paper interviewed Rubio, who said it was “sad” that the Castro regime had created the impression he wants “to starve the Cuban people…I’m glad they see us as a threat. They should.” Rubio told the paper the Cuban government “is trying to indoctrinate their people.”

Still, Rubio hit back on Twitter: “NYT follows up traffic tix & ‘luxury speedboat’ stories with expose of Castro regime's propaganda on me. #nicetry”

The earlier story about Rubio having gotten four traffic tickets in 17 years was absurd, and the tone of the piece on his personal finances and fishing boat was condescending. But the Cuba piece seemed legitimate.

Christie’s George Washington Bridge scandal was also a legitimate story, with three of his aides and appointees now under indictment in the political payback scheme. But Christie has a point that some outlets beat it to death, and when it turned out the New Jersey governor was right—that there’s no evidence he knew of the plot in advance—they simply pivoted to the notion that he had “created an atmosphere” where such chicanery could occur.

But Christie’s larger problem now is a 30 percent approval rating back home. If his numbers were higher, the poll-driven media would take him more seriously.

As for access, The Atlantic’s David Frum pivots off my piece about Hillary’s plans to contrast her media reticence with that of Jeb Bush. He says the former governor has done 39 interviews since February, ranging from Jimmy Fallon to the Daily Caller to Der Spiegel:

Nobody is making an issue of Jeb’s media access, and he hasn’t complained about his treatment.