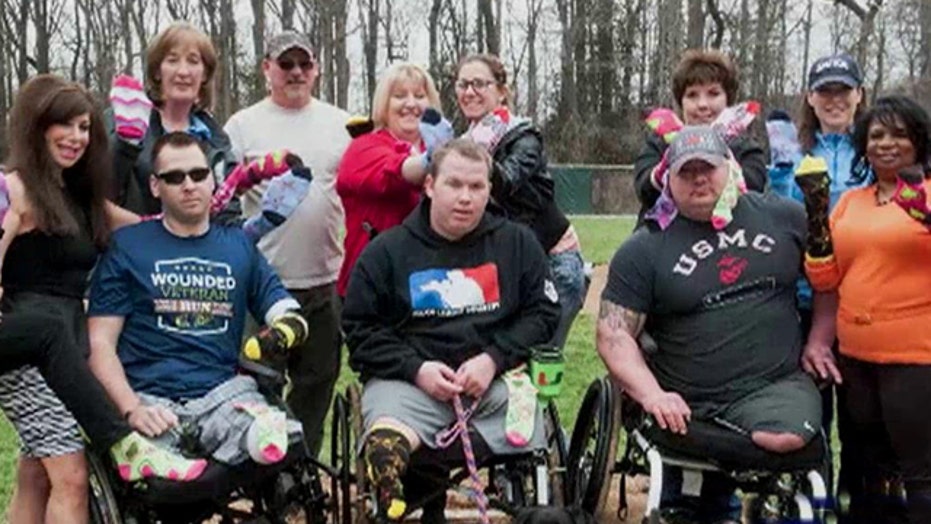 As Americans give thanks, there is one group of women they especially need to remember over the holidays: the Mighty Moms of Walter Reed. They pick up the pieces when their children return from war.

The stories of ten mothers and their children are featured in a new book, Unbreakable Bonds,The Mighty Moms and Wounded Warriors of Walter Reed.

Some of these mothers have spent up to four years living with their child at Walter Reed National Military Medical Center in Bethesda, Maryland while they recover from multiple amputations and traumatic brain injuries.

The stories they tell of the challenges they face as caregivers to our nation's wounded warriors are searing, inspiring and uplifting. Fox News interviewed half a dozen of these mothers to learn what they’ve been through and the "band of mothers" that they have formed as a result.

Stacy Fidler's son Mark stepped on a mine while wearing a belt of grenades in Afghanistan. He and his mom have been at Walter Reed since October 2011.

Fidler said she finds support in the group of mothers. “We share the good things and the bad things,” she said. “We clap when they take their first steps and get sad when they get sent back to the ICU.”

Fidler, like many of the mothers, spends almost all her time at the hospital caring for her son. “Eventually you just end up living in a hospital room. It's your home. You end up moving in, sleeping there, eating there, everything with your kid.”

One theme common among the Mighty Moms is that almost all of them had to leave their jobs and dedicate themselves to caretaking full time.

“Eventually I did lose my job in the end,” said Lynn Braden-Reed.“It's been hard. I have a 10-year-old daughter and five other children.”

Her son, Christian, described in the book as a “strapping U.S. Marine,” stepped on a pressure-plated improvised explosive device in Helmand Province, Afghanistan in December 2011. The blast, Braden-Reed said, “blew him up in the air, and blew one half of his body off with it.”

Christian has since returned to his home in Tennessee and has begun a nonprofit called Gunslinger Outfitters, which takes other wounded vets on guided hunting and fishing trips.

Julie Keys and her son Adam are the longest residents at Walter Reed, staying in Building 62, where the most severely injured rehabilitate.

Adam was injured in July, 2010 when his unit was hit by a roadside bomb, killing his best friend and three others. “Adam was the sole survivor of that blast,” Keys said. Lost were fellow soldiers Sgt. Chase Stanley, Spc. Matthew Johnston, Sgt. Zachary Fisher and Spc. Jesse Reed.

Although Adam had all his limbs after the blast, doctors had to amputate three of them after he suffered a severe infection. In all, he had to endure 140 surgeries.

“He's a fighter and he's my personal miracle,” Keys said. The other moms helped her though. “I thought, I can do this.

“Six months, a year. I've now been there four years and four months.” And when she wasn’t with Adam, she was with the Mighty Moms. “We've sat out front and had the best of times laughing and carrying on and then some nights, we're out there and we're all crying.”

Tammy Karcher’s son, Jeffrey Shonk, was shot by his roommate, an attack that proved as confusing and upsetting as it was physically debilitating. The surgery, Karcher said, was intense.

“They removed his skull - the left side of his skull at 6:05 in the morning, the same time he was born,” Karcher tearfully explained.

“They told me he may never walk or talk again. And he's walking and talking and he can drive. I have a grandson that I never thought I'd have.”

Karcher also had to resign from her job -- as did Lyn Braden Reed, Valence Scott, Carolee Ryan and Soibhan Fuller-McConnell.

Ryan’s son, Thomas McRae, lost both his legs above the knee and his left arm. He also suffered brain trauma and was blinded in one eye.

His gradual recovery is one of the more inspirational stories to come out of Walter Reed.McRae was described in the book as “poised, confident, self-deprecating and often funny.”

Ryan was faced with caring not just for Tom, but also for his young daughter, Aidan, who was essentially raised at Walter Reed. “It has brought me and Tom closer together. I feel like we have a second chance. It's brought our family very close,” she said.

Valence Scott had to care for her son after he suffered a devastating traumatic brain injury. He would soon get divorced, leaving his mother as his sole caretaker. Authors Dava Guerin and Kevin Ferris summed up Scott’s dedication to her son this way:

“Even under normal circumstances, moms take care of their young like fierce lionesses. But, when those children are catastrophically injured during war, there is no stopping their roaring maternal instincts.”

The most difficult story of the Mighty Moms is that of Siobhan Fuller-McConnell and her son Derek McConnell. Derek stepped on an IED in while on patrol in Afghanistan. After recovering from horrific wounds, the loss of two legs, and infections, he died suddenly from medical complications from his treatment after being released from Walter Reed.

He had planned to marry his fiancé, Krystina, after they won a contest to have their wedding paid for by a New Jersey jeweler.

Before Derek died, he recorded a YouTube message for his mom after he moved from his bed to his wheelchair for the first time.

“My mother hasn't seen the video yet, so you guys are going to get a sneak-peak before she even sees it. I still love her so much and I'm so thankful for everything she's done,” he said in the video.

Every mother has a story to tell.

Paulette Mason got a call at 10:30 one night from an Air Force base in Afghanistan informing her that her daughter had been in a serious car accident. Staff Sergeant Stefanie Mason suffered a traumatic brain injury when her up-armor SUV lost control and her head crashed into the bullet-proof windshield. She also suffered a badly broken leg, a broken jaw and a degenerated disc in her back.

“All I can remember is Stephanie saying, Mom I need you, and that was, I was helpless. She was 8,000 miles away,” Mason said, adding her heart was broken.

Mason moved into Walter Reed with her daughter during her recovery and became a fierce advocate for her daughter and others recovering there. She is described in the book as someone who encouraged others to speak up when they thought something needed to be said to the medical staff.

“I don’t think some of the military was that used to working with strong women, women who were mothers,” Mason is quoted as saying. “Because we would ask questions.Instead of saying, ‘Yes,’ we’d ask, ‘Why? How come? What are you doing?’ And they didn’t like that, so they had trouble with us.”

Stephanie has recovered well. Despite the original diagnosis that she may never run again, she has since run the Army Ten-Miler, logging a time just 20 seconds slower than the day she ran it before suffering her injuries. Her mother played a huge role in her recovery.

Mason said she wants to organize a group for Silver Star mothers -- mothers of the wounded -- so they can be coached on how to overcome the challenges ahead and take advantage of the nonprofit assistance that’s available.

As Fidler put it, these women in the book are not the only Mighty Moms to be thinking about. “It's not just about us ten moms. It's about all the moms who are going through what we went through.There's hundreds of Mighty Moms out there.”