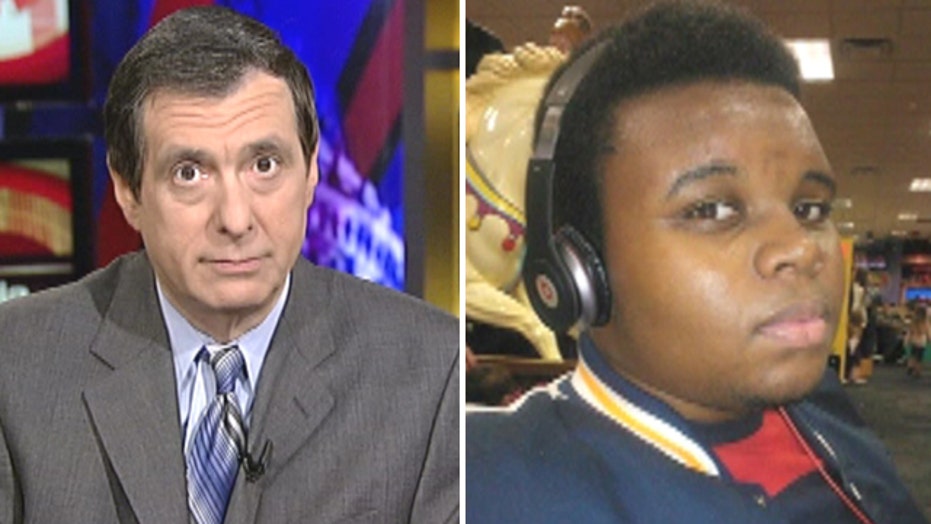 Kurtz: Enough with the racial exploitation of Ferguson

It’s been a white-hot cauldron of emotion as Americans — and of course the media — have chosen up sides and argued about the Michael Brown tragedy.

For those who believe there was no case to indict Darren Wilson, the fact that Brown is being cast as a civil rights martyr is hard to grasp.

“You’re going to embrace a guy who knocked over a convenience store and then according to a grand jury testimony acted in ways that would get my children shot?” asks MSNBC’s Joe Scarborough. “That’s your hero? That’s the reason you want to burn down black businesses?”

For those who can’t fathom how an 18-year-old without a weapon wound up dead after a confrontation in broad daylight, the grand jury’s decision is equally hard to grasp.

“Our American culture’s fearful dehumanizing of black men materialized once again when Officer Wilson saw Michael Brown as a demonic force who had to be vanquished in a hail of bullets,” writes Michael Eric Dyson in the New York Times.

But on the day after President Obama held a series of meetings with Ferguson protestors, civil rights leaders and law-enforcement officials, my purpose here is not to rehash the case. The dividing lines—many liberals and African-Americans backing Brown, many conservatives and whites supporting Wilson—are all too familiar as the media have milked the story for ratings and clicks.

There has been some thoughtful journalism since the non-indictment as commentators in both camps struggle to understand what Ferguson means, and whether there is room for common ground.

What some African-Americans fail to see is that police officers have to make split-second decisions about defending themselves. Leaving aside the conflicting testimony about whether Brown was charging the office, there is no dispute that he reached into the police car, there was a struggle for the gun, and Wilson fired two shots. That cannot be wished away.

What some whites fail to see is that the black community is looking at a long history of majority white police forces in minority communities, and that during a seven-year stretch ending in 2012, a white police officer killed a black person nearly twice a week (whether justified or not). What’s more, many successful black leaders have personally experienced of being hassled by the cops or followed in a store.

Conservative Times columnist David Brooks acknowledged this the other day on “Meet the Press”:

“We all have to have a new social compact on this. Whites especially have to acknowledge the legacy of racism and have to go the extra yard to show respect and understand how differently whites and blacks see police issues. So whites can’t just say ‘Does this look right to me,’ but ‘Does this look trustworthy to the black community.’ That has to be the standard.” Brooks went on to say that “we are no longer in the civil rights era” and that racial questions are no longer a matter of “good vs. evil” or “right vs. wrong.”

We’ve been having some version of this debate from the Rodney King riots of 1992 to the killing of Trayvon Martin last year. And it’s sad that things have gotten no better in a country that has twice elected an African-American president. Even the flap over Obama’s pal Henry Louis Gates, the Harvard professor arrested for trying to break into his own home, was a small example of the wide gulf on racial matters.

I would draw the line at the argument by African-American writer Ta-Nehisi Coates,  who wrote in the Atlantic that “taken together, property damage and looting have been the most effective tools of social progress for white people in America.”

Coates said on “Face the Nation” that this is “just American history,” going back to the Revolutionary War, and that he’s not defending it.

“That is not to say that looting is right, that looting is correct,” said Coates. “But when the government, which often acts violently towards African Americans, then turns around and lectures black people about nonviolence, we have right to be skeptical of that.”

But did Wilson “act violently” against Michael Brown or defend himself? Police sometimes engage in excessive force and harassment, but in this case, at least, the grand jury sided with the officer.

There’s a similar problem with the agitators and the looters who ransacked and burned stores in Ferguson: they give demonstrators a bad name. People have every right to peacefully protest in this country, but not to use a shooting as an excuse to steal TVs — and engage in destruction that just hurts the black community.

I don’t have much faith that the media won’t man the same battle stations the next time there’s a racially charged incident. But maybe more people will start spurning those who are exploiting the situation without regard for the facts.