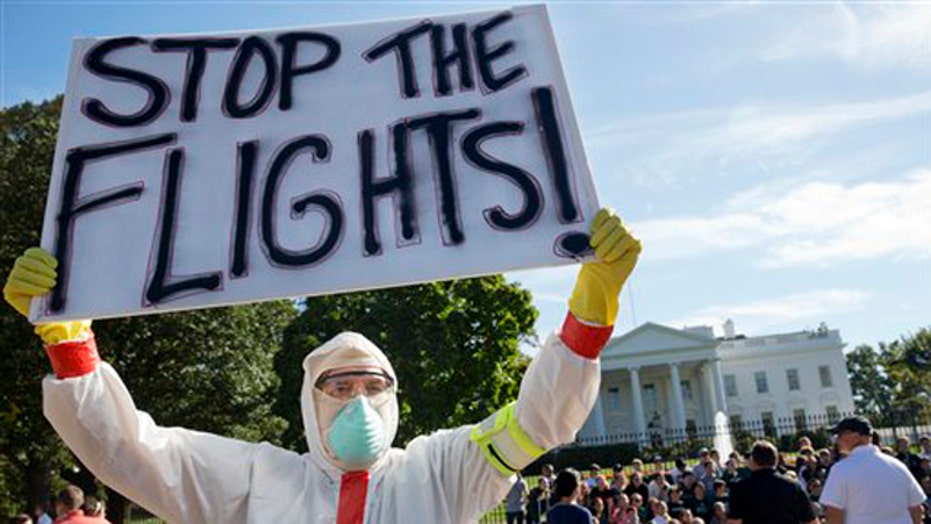 The Republicans have been trying all year to make Barack Obama the central issue in the midterms, and now they may be breaking through.

Ebola has gone viral in the 2014 campaign.

It would be hard to imagine a more resonant issue for a party that has tried to portray the administration as overwhelmed by crises. And it clearly has Democrats on the defensive.

The GOP message is reinforced every hour of every day by the onslaught of media coverage. The public is clearly worried about the spread of the virus, even though the toll to date is one dead American who came from Africa and two infected nurses who treated him. The more that Ebola is dominating our television screens, the more that Republican candidates are in sync with the news cycle.

Democrats, in turn, are striking by accusing their opponents of pushing budget cuts that undermined crucial health research.

But the surest sign that the Dems are playing defense: Some of them are reversing their position on a travel ban against the West African countries devastated by the disease by embracing such a ban. That is a break with the Obama administration, even as the president maintains he has no “philosophical objection” to banning travel from Liberia and its neighbors.

Off-year elections are by definition a collection of state and local races that revolve around different issues. Republicans had hoped to nationalize the election by running against Obama, whose name is not on the ballot (though he says his policies are). But with some pundits calling this a Seinfeld election, that didn’t seem to get much traction.

Given the perception that the White House responded slowly, and a series of mistakes by the Centers for Disease Control, the Ebola story fits nicely into the Republican narrative that the administration is always leading from behind. After the VA scandal, the Secret Service scandal and the ISIS surge, the Ebola fears really hit home.

A Politico poll out yesterday dramatizes the deep partisan divide over the issue. In examining likely voters in key Senate and House races, the survey found that 81 percent of those supporting Democrats have a lot of confidence or some confidence in the administration’s ability to contain the outbreak. But just 43 percent of Republican supporters feel that way.

This is echoing across the campaign trail.

North Carolina’s Democratic Sen. Kay Hagan had dismissed talk of a travel ban against the African nations. In a debate two weeks ago, Republican Tom Tillis said: “Ladies and gentlemen, we have an Ebola outbreak. We have bad actors that can come across the border. We need to seal the border and secure it.”

But Hagan countered that “if you isolate those countries, you’re not going to solve the problem.” She repeated her stance at a news conference last week, saying: “That’s not going to contain the epidemic that we see happening in Africa.”

That was then. On Sunday, Hagan told reporters that “I’ve always said that a travel ban should be part of a broader use of tactics. But I do think now that we have had two incidents in the US of individuals getting infected with Ebola, we need to have a temporary travel ban on non-US citizens coming from the effected countries in West Africa."

Except that’s not what she had been saying.

Democratic Arkansas Sen. Mark Pryor was widely mocked after an NBC interview in which he could barely manage a coherent answer when asked about the government’s Ebola response. Now he’s got on offense with an ad against Republican Rep. Tom Cotton.

The spot opens with news anchors warning about Ebola before the narrator intones: “Tom Cotton voted against preparing America for pandemics like Ebola.”

Which is, well, partly true. Cotton was one of 29 House Republicans to vote against the Pandemic and All-Hazards Preparedness Reauthorization Act of 2013. But the ad neglects to mention that after the Senate made some changes, Cotton voted for the bill on final passage. Politifact called the ad Mostly False.

In a Colorado debate, Democratic Sen. Mark Udall played a similar card, arguing that his Republican opponent, Rep. Cory Gardner, voted against nearly $300 million in CDC funding. Gardner returned fire by talking about “jazzercise programs, massage therapy and urban gardens. How about we use money responsibly to make sure we're protecting the American people instead of spending it wastefully under this administration?"

The issue is also getting traction in Iowa. Republican Senate candidate Joni Ernst, she of the castrating pigs ad, invoked Ebola against Democrat Bruce Braley. “Unfortunately, our administration, including Congressman Braley, has been very reactive rather than proactive. We have seen the threat from Ebola for the past several months, and I would encourage travel bans, additional screenings for travelers, continuing aid into those nations, but also supporting those that are researching and coming up with cures and prevention.”

Braley said he had asked tough questions and that if a strong response “means putting travel bans and it protects the American people, we need to consider doing that.” He also accused Ernst of supporting a government shutdown that would have hurt the CDC and National Institutes of Health.

Now it’s not that voters are going to cast their ballots based primarily on Ebola. But if the crisis is feeding a sense that things are spinning out of control, that can’t help the president’s party. At the very least, the nonstop media coverage is drowning out any other message that either party wants to deliver.