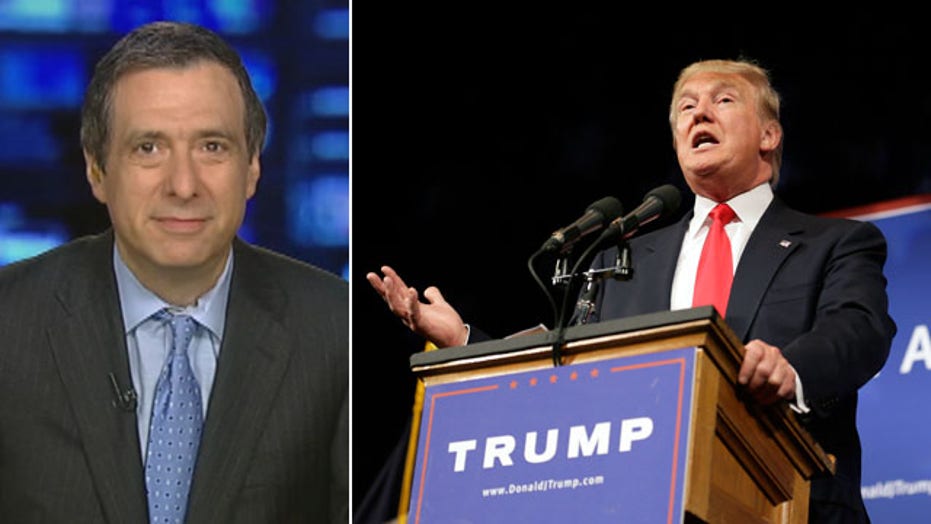 Kurtz: Trump's got the money and the mouth

So deep is their disgust that they’re filling the airwaves and print columns and cyberspace with denunciations of The Donald.

Which is part of the game.

Media organizations milk Trump for ratings and clicks, even as they relentlessly trash him.

Trump knows this and deftly exploits it, seizing the spotlight whenever he wants.

In fact, you could argue that his presidential campaign, which he kicked off Tuesday, is an exercise in seizing the spotlight. And we in the news business will play along, because we love bombast and bashing and larger-than-life personalities.

I’ve covered Trump on and off for 30 years, since he was just a rich New York hotel guy, and he is a master at manipulating the media. Whether it’s garnering publicity for his business deals, his political views, “The Apprentice” or anything else, he knows how to press the buttons.

When Trump picks feuds—he used to do it mainly through the tabloids, now mostly on Twitter—he knows that headlines will follow. Because he’s good copy. So we can’t trump The Donald; he can only trump us.

Even if you discount the possibility of him winning the GOP nomination—and his negatives are sky-high—he will impact the debate with his money and his mouth. And therefore can’t be ignored.

On the substance, Trump is — how to put it gently? Oh, why bother! — an ass. Not just an ass, but an ass of exceptionally intense asininity. China? “China’s leaders are like Tom Brady, and the U.S. is like a high-school football team,” Trump says. And so, we should do what?

Salon is equally appalled, saying the Republicans need a nominee who is “definitely not Trump, who’s nothing more than a blowhard reality show hack who lucked and scammed his way into fame and fortune.”

This kicked up a furor, and Trump doubled down in an interview with MSNBC, saying: “They’re not sending us their finest people.” Which means another round of publicity that could appeal to the anti-immigrant crowd, just as Trump shamelessly flirted with the birther movement during Barack Obama’s first term.

“Trump's candidacy is a terrible thing for politics, plain and simple. Here's why: Trump can't and won't be ignored. Ever…

“Donald Trump will never be president.  He knows that. We know that.  But his candidacy ensures that for the next several months (at least), he will suck the attention and oxygen away from the men and women who might be.  That's great entertainment. But it's terrible for politics.”

So I think we can agree on one thing. Donald Trump is a uniter. He has united the entire media establishment against him. And we all know how popular the media are.