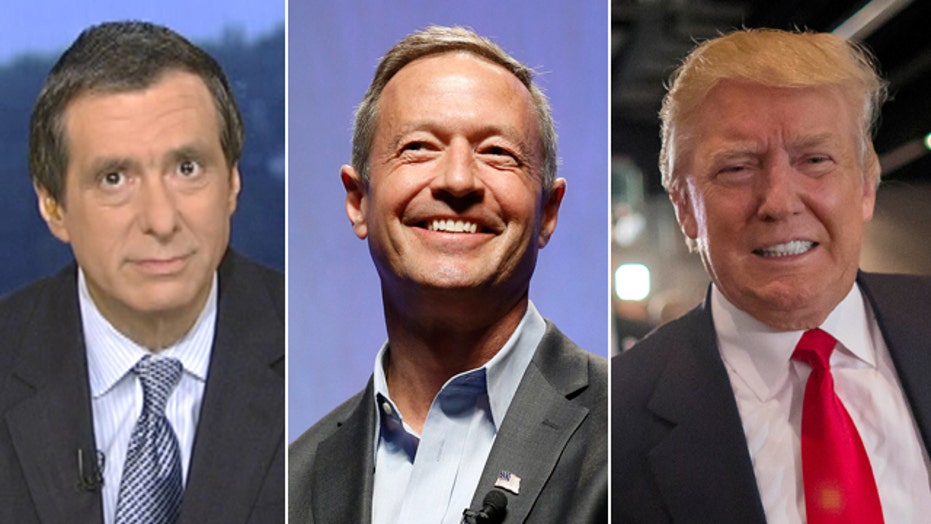 Kurtz: O'Malley is sorry, Trump is not

Every time I watch the footage, I can hardly believe my eyes.

No, I’m not talking about Donald Trump (yet).

Martin O’Malley had a chance to seize an important political moment—and instead he wimped out. And the way he did it speaks volumes as to why he’s gotten so little traction in his race against Hillary Clinton.

In politics there are times when you have a moment to project an image of strength, independence or just plain brashness. This was not one of those times.

The former Maryland governor was at the Netroots Nation conference over the weekend when a group of demonstrators began demanding that he talk about police brutality. They soon began chanting: “Black lives matter!”

O’Malley, who had been talking about civilian boards to oversee police, responded with this:

What could possibly be objectionable about that statement?

But the mostly black protesters didn’t like it and began booing the Democratic candidate.

O’Malley might have responded by taking them on, by making an impassioned plea for justice for all races.

But he did not. And in a subsequent interview with the online show “This Week in Blackness,” he apologized:

On paper, O’Malley should be a highly credible contender. He was a solid two-term governor who championed such liberal causes as gay marriage and gun control, and made his mark as mayor of Baltimore (although that city is now synonymous with riots).

But Bernie Sanders, who is attracting huge crowds, has totally eclipsed O’Malley, who's raised all of $2 million. And the ex-governor’s refusal to defend as anodyne a statement as “all lives matter”—which doesn’t mean police tension with minorities isn’t a significant problem –reeks of excessive caution.

Another missed opportunity: O’Malley could have made a daring move by taking on Planned Parenthood over those truly disturbing undercover videos released by a pro-life group. Even some strong pro-choice advocates have said they found it troubling to watch Planned Parenthood officials nonchalantly discussing the merchandizing of fetal parts and ways in which to crush fetuses in a way to preserve the most marketable organs—including one yesterday in which an executive haggled over the price of fetal tissue sales because she wants “a Lamborghini.” Planned Parenthood President Cecile Richards apologized after the first video, although the group attacked yesterday’s release as a “heavily edited” product by “widely discredited” activists.

O’Malley could have both supported abortion rights and decried that kind of cavalier talk about fetal parts. Of course, Hillary Clinton hasn’t addressed the videos either, but that’s precisely the point.

Now contrast O’Malley’s rush to apologize over “All Lives Matter” with Donald Trump’s constant refusal to do so, whether it’s remarks about Mexican illegal immigrants or John McCain’s war record. As the controversy builds, Trump defends, deflects and counterpunches, but he almost never expresses regret for his words. (On the McCain furor, Bill O’Reilly got Trump to say “certainly if there was a misunderstanding I would totally take that back,” but that’s as far as he went.)

Many voters are tired of temporizing politicians who are always calibrating their words. By bulldozing his way through his missteps, Trump alienates the media and the political establishment but fires up supporters who like when he goes rogue. Then he turns the inevitable attacks on him into evidence that he’s taking on the elites, dominating news cycle after news cycle.

In Trump’s world, sorry is a sign of weakness.

In the new Washington Post/ABC poll, Trump is at 24 percent, with a double-digit lead over Scott Walker and Jeb Bush. Martin O’Malley is at 2 percent, in virtual Siberia behind Hillary’s 68 percent and Sanders’ 16 percent. Nuff said.

Small political moments can send big messages. In 1980, during a format dispute at a New Hampshire debate, Ronald Reagan rocked the room by declaring, “I am paying for this microphone, Mr. Green!”

In 1992, Bill Clinton had what came to be known as his Sister Souljah moment. He was speaking to Jesse Jackson’s Rainbow Coalition and decided to take on the hip-hop figure, who had said after the L.A. riots: “If black people kill black people every day, why not have a week and kill white people?”

Clinton denounced Sister Souljah for spewing “hatred” (“If you took the words ‘white’ and ‘black,’ and you reversed them, you might think David Duke was giving that speech”), was in turn criticized by Jackson, and showed he would stand up to extreme black rhetoric.

By contrast, in the spring of 2011, Tim Pawlenty was poised to whack Mitt Romney over what he was calling “Obamneycare”—a coinage meant to dramatize the similarities between the president’s health care law and the former governor’s Massachusetts law. But when asked about this at a New Hampshire debate, Pawlenty whiffed—trying to explain away the criticism instead of going after Romney—and dropped out of the race soon afterward.

Running for president is about policy and past performance, but it’s about theater as well. That’s something Donald Trump knows and Martin O’Malley has yet to learn.