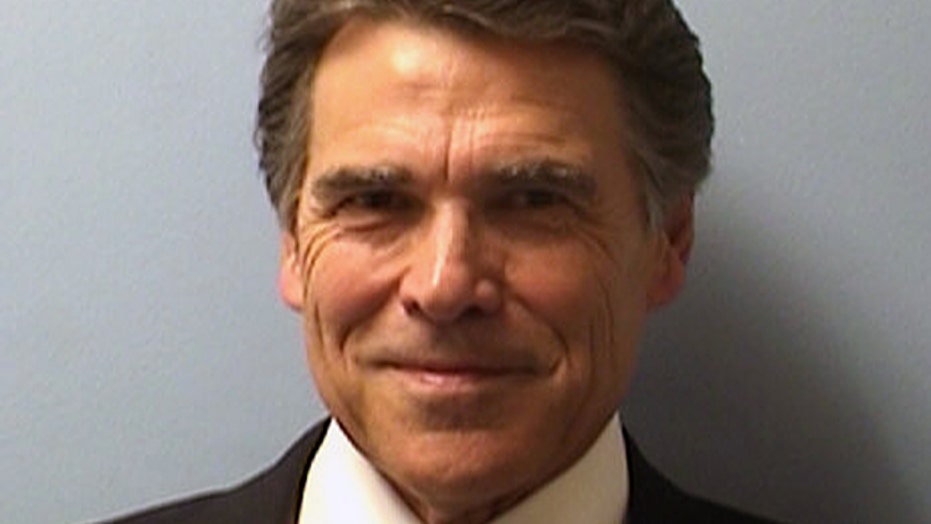 Perry booked on abuse of power charges, vows to 'prevail'

Texas Gov. Rick Perry was defiant as he turned himself in to authorities Tuesday on the heels of his indictment for alleged abuse of power, vowing to "prevail" in the case.

The Republican governor spoke to a cheering crowd outside the Travis County justice complex in Austin before entering the courthouse, saying he does not regret his actions.

The governor was fingerprinted and had a mug shot taken before leaving a few minutes later. Shortly thereafter, Perry posted a photo of himself at an ice cream store on Twitter.

This comes after Perry began assembling a high-powered legal team to defend him in the case, which Perry and his allies argue is politically motivated. Perry is facing charges of coercion and official oppression that carry a maximum sentence of 109 years in prison.

A grand jury in Austin, a liberal bastion in otherwise largely conservative Texas, indicted Perry on Friday for carrying out a threat to veto $7.5 million in funding for the state's public integrity unit after Travis County District Attorney Rosemary Lehmberg, a Democrat, refused to resign following a drunken driving arrest. The ethics unit is housed under Lehmberg's office.

The governor has emphatically stood by his veto and denied all wrongdoing. The judge overseeing the case, Republican Bert Richardson, decided against issuing an arrest warrant and instead granted a simple legal summons.

No one disputes that Perry has the power to veto measures approved by the Legislature, but his threat to do so before actually carrying it out prompted a complaint from a left-leaning watchdog group.

Aides said the case wouldn't prevent Perry from maintaining his packed upcoming schedule, which includes visits to the key presidential battleground states of Iowa, New Hampshire and South Carolina in the next two weeks. Perry also has a Thursday speech on immigration at the Heritage Foundation in Washington.

Perry's arraignment has been set for Friday morning, though a representative says Perry will not attend.

Fox News' Casey Stegall and The Associated Press contributed to this report.