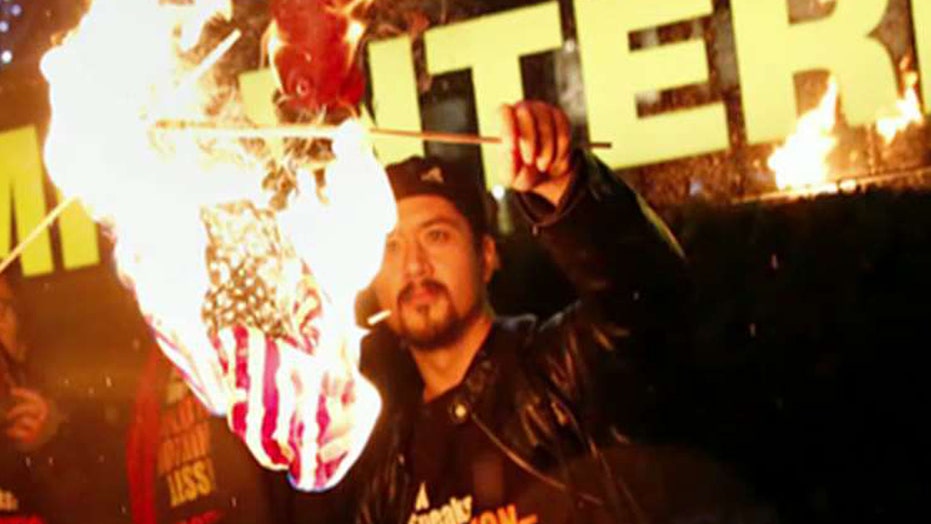 Stoking the fears of a Trump presidency, liberal activist groups have launched campaigns online and around the nation to help people cope – and even survive – their version of democratic doomsday.

Some are based on Trump’s mixed signals about illegal immigration, while others seem aimed at a more generalized sense of unease. One effort that launched this week, called “WhatDoIDoAboutTrump.com,” is depicted by its organizers as a non-partisan “website [that] turns Trump angst into action – online and off.”

“Not sure how to protect yourself if some of Trump’s campaign promises become reality?” the San Francisco-based site asks.

It provides links to websites of organizations, such as the American Civil Liberties Union, which advise people about what steps to take or what they may face if Donald Trump follows through on some of his promises. One link leads to “Welcome to the OH CRAP! WHAT NOW? SURVIVAL GUIDE,” which describes itself as “a crowdsourced collection of health, legal, and safety plans and resources + social, digital and economic security related resources urgent now as an outcome of the recent US election.”

Experts say scaring consituencies about politics is standard operating procedure for activist groups, but what's different this time are the intensity, and the fact that it has started well before Jan. 20, 2017, when Trump will be sworn in.

Corinna Kester, one of the founders, says the group, which includes a former national press secretary for the Democratic National Committee, is not pushing an agenda.

“If people are upset about the election, we encourage them to figure out how to get involved and work with that, from donating to petitions to protests.”

We can say, in one sense, it is intensifying divisions in America.

Organizations and, in many cases, lawyers, are urging people and groups they deem at-risk under a Trump presidency to take action now to protect themselves. School administrators are assuring students concerned about immigration raids that they won’t be spirited away, some city officials are vowing to provide a sort-of buffer to any federal attempts to strip benefits or programs. On Monday, the Los Angeles Unified School District announced that it was setting up a hotline and "support sites" in response to the deep anxiety among students about Trump as president.

The Rev. Al Sharpton is organizing a rally of black activists and lawmakers in Washington D.C. days before Trump’s inauguration in mid-January to, as he told The Hill, “put the Democrats on notice to use the confirmation hearings to really go after” Trump’s nominees.

One of the most high-profile efforts aimed at creating preemptive buffers against Trump policies are so-called sanctuaries for immigrants who are here illegally.

Students at various colleges are pushing their campuses to be designated sanctuaries. Some cities are moving toward declaring themselves safe zones for such immigrants, saying they will not report them to immigration authorities if they come across them during the course of providing a service.

On Tuesday, the Santa Ana City Council voted to designate the municipality a sanctuary, a non-binding action that they may make enforceable through an ordinance, according to the Los Angeles Times.

The Times noted that “the move is in direct defiance of President-elect Donald Trump, who was critical of illegal immigration and sanctuary cities during his campaign.”

“The day after Donald Trump got elected, our kids were falling apart emotionally,” the Times quoted Councilmember Sal Tinajero, who is a high school teacher, as saying. “They thought their parents would be deported.”

Trump has denounced such efforts as divisive and the people who have protested his election as “crybabies.” His supporters, as well as some who voted for Democrat Hillary Clinton or third party candidates, say it behooves everyone to accept the results of the election and work to be united.

“This sounds like a large group therapy session,” said Fred Siegel, a historian who is a senior fellow at the Manhattan Institute and professor at Saint Francis College. “There’s a way in which this is all good and right in democratic terms.”

Siegel said the trend to organize in advance of Trump assuming the presidency is intriguing, and more in line with the kind of actions taken against policies and governments that are seen in Europe, particularly France.

“We can say, in one sense, it is intensifying divisions in American society,” Siegel said to FoxNews.com, “What that represents is President Obama’s success in Europeanizing American politics.”

“In France, the argument has always been when something occurs in Parliament that is unacceptable to you, you take to the streets. These [actions] are occurring in advance of – not in response to – policy being initiated.”

Louis DeSipio, a political science professor at the University of California-Irvine, said that the patchwork efforts to organize against Trump and his expected policies reflect an already-divided nation.

“President-elect Trump set out broad principles, and wasn’t specific about some policies,” DeSipio said. “There will always be people who are unhappy about an election. In any election, you can see a complete reversal of fortunes. The challenge for any president in this situation is to build bridges to some of his former opponents.”

President George W. Bush did so in response to concerns – among those who did not support his election – over how he would handle education and Medicare prescription costs, DeSipio said.

“He worked with Democrats, with Sen. Ted Kennedy, on both of those issues,” he said.

DeSipio expressed misgivings about efforts underpinned by a refusal to accept Trump as president, a movement that has a hashtag -- #notmypresident.

“Philosophically, I don’t accept it,” DeSipio said. “He was accepted by rules in place before the election.”

The approach of some groups to try to influence policy and laws at the local level can be both healthier and more practical in many cases, he added.

“We may get some criticism from Trump supporters,” said Kester. “But we’re all getting involved in a democracy.”