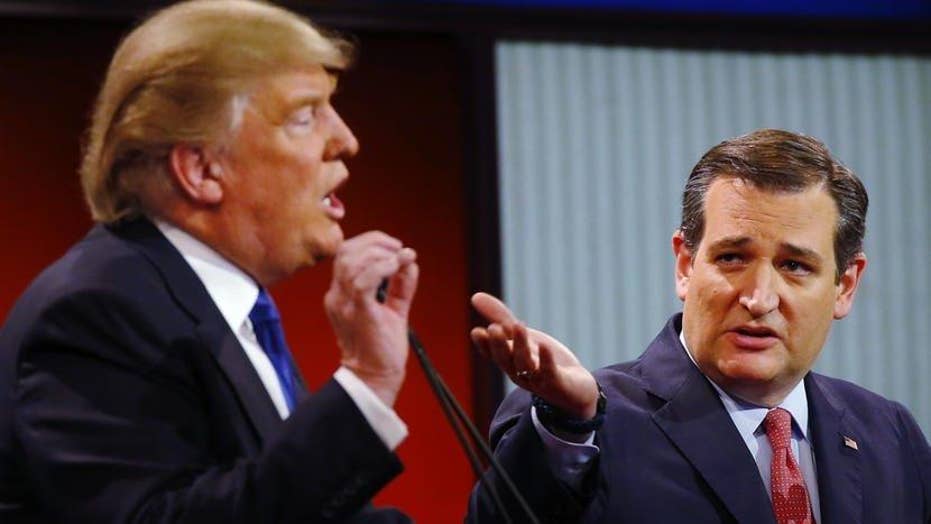 War of words intensifies in GOP race over delegate process

Texas Sen. Ted Cruz waded into the controversy over the Republican party's nominating process Monday, accusing his rival for the GOP nomination, Donald Trump, of "whining" over Cruz's sweep of Colorado's delegates for this summer's Republican National Convention in Cleveland.

"Donald has been yelling and screaming. A lot of whining. I'm sure some cursing. And some late-night fevered tweeting," Cruz told hundreds of supporters in Irvine, Calif.

Cruz went after Trump again at an appearance in San Diego, saying, "As we know in the state of California, whine is something best served with cheese."

Addressing the real estate mogul directly, Cruz then said, "Donald, it ain't stealing when the voters vote against you. It is the voters reclaiming this country and reclaiming sanity."

Trump has repeatedly blasted Colorado's Republican leadership since this weekend's state convention, and did so again Monday at a rally in Albany, N.Y., calling Cruz's win "a total fix."

"There’s so much - the people all wanted to vote. They took away their votes," Trump said. "I think it’s going to come back to haunt them because people aren’t going take it anymore. We’re not going to take it anymore. It’s a corrupt system. It’s a totally corrupt, rigged system."

Cruz noted that Trump's complaints follow his struggles in recent primary contests in Utah, North Dakota, Wisconsin and Colorado. He also took to social media to drive home the point.

Trump tied the Colorado controversy to next week's New York primary, where polls show him holding a big lead over Cruz and Ohio Gov. John Kasich.

"You’re going to go out and vote … well, we found out in Colorado it's not a democracy like we thought and we're not going to have a rigged election," Trump said.

Republican National Committee Chairman Reince Priebus pushed back against Trump's claims Monday, telling conservative radio host Mike Gallagher in an interview that the convention system used in Colorado is "not an affront to the people of Colorado. It just is what the rule is."

"I don't know why a majority is such a difficult concept for some people to accept," Priebus said.

Colorado isn't the only delegate battleground between Trump and Cruz. Trump won the popular vote in Louisiana's early March primary by three percentage points but the close result gave both candidates the same amount of delegates.

"I end up winning Louisiana and then when everything is done, I find out I get less delegates than this guy that got his ass kicked”, Trump said Monday.

The top two in the Republican party delegate race are not only seeking votes, but are also looking to outmaneuver each other in state gatherings where the delegates who will attend the summer convention are being chosen. Cruz's campaign has implemented a more strategic approach to picking up delegates, which, despite Trump's current lead, are essential if he wants to reach the 1,237 delegates needed to win the nomination.

Fox News' Christopher Snyder and the Associated Press contributed to this report.