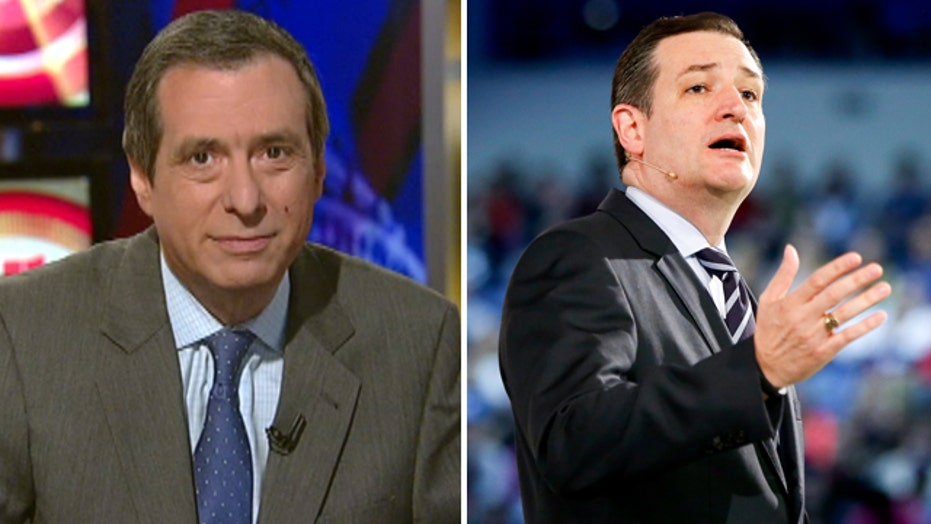 In kicking off his presidential campaign Monday at Liberty University, Cruz began with his father, a Cuban immigrant who washed dishes in Texas for 50 cents an hour, who drank too much along with his wife, who left home when Ted was 3 but came back because “God transformed his heart … Were it not for the transformative love of Jesus Christ, I would have been raised by a single mom.”

That introduction, part of a passionate speech delivered without notes in Lynchburg, Va., helps explain why many in the mainstream media don’t quite know what to make of the Texas senator — or view him as a fringe figure.

On the “Today” show, Kelly O’Donnell said “he’s 44, only been on the national scene a couple of years.” MSNBC’s Jonathan Alter, while not counting him out, also said “he’s only been in the Senate for two years.”

Perhaps they had forgotten that Barack Obama was 45 and had spent just two years in the Senate when he kicked off his presidential candidacy?

Cruz is a hero to the Tea Party right, and his speech hit many of its themes: against same-sex marriage, protecting the right to bear arms, reclaiming the Constitution. But the very things that make him popular could, in the media’s telling, be campaign obstacles.

Here’s how CBS News put it:

“Cruz's down-the-line appeal to the GOP base may prove to be his calling card in the primary battle to come, but it's also led him to pick fights with the party brass that could ultimately undermine his candidacy. His ability to raise money, secure endorsements, and build the kind of infrastructure necessary to win a national primary may be hampered by his lack of support among the establishment. And his ideological rigidity has sown doubts among some Republicans about how competitive Cruz would be in a general election.”

In the two-minute NBC report, there were sound bites of Cruz reading “Green Eggs and Ham” (from his 21-hour filibuster that preceded the government shutdown) and warning “the world is on fire” (prompting a question from a 3-year-old girl).

I wrote last week that the many in the MSM went way overboard in using that incident to portray Cruz as a frightening figure, despite the fact that the girl’s mother said she wasn’t scared at all.

Look at how the Huffington Post frames its setup piece for the Cruz kickoff:

“Much of the rest of the country (including Republican leaders in Congress) viewed Cruz as a vaguely scary renegade, and the GOP establishment’s official grumpy grandpa, Sen. John McCain (Ariz.), dismissed him as a ‘wacko bird.’

"But the Young Americans for Liberty loved his loathing of the party elders, and his determination to shove a stick between the spokes of the System …

“Uncorked anger doesn’t usually win presidential nominations, let alone presidencies. People want hope and uplift in the White House and not just expressions of outrage. The president is the person who is supposed to make things work. To some, the 44-year-old Cruz gives off a vaguely scary aura of cheerful menace.”

And this happens to reflect the line of the Democratic Party, which in an email calls Cruz, in bold letters, “really, really scary.”

Politico also emphasizes the theme that Cruz ticks people off:

“His own colleagues in Washington have frequently been disdainful of Cruz since he helped instigate the 2013 government shutdown. And his hardline views and uncompromising style have disqualified him even in the eyes of more conservative elements of the political class who are concerned about electability.

“But Cruz is embracing that outsider status, just as he did in Texas, where in 2012 he beat out the presumed Republican Senate nominee, former Lt. Gov. David Dewhurst, and became a hero to that conservative state’s tea party.”

The Washington Post says this is one of five things you need to know about the senator:

“Cruz's often tells the story of his father, Rafael -- also the senator's given name -- leaving Cuba as a young man with $100 sewn into his underwear. Rafael Cruz, an evangelical pastor, has a history of making headline-grabbing statements. They include telling an audience that President Obama should be sent ‘back to Kenya,’ asserting that the Bible ‘tells you exactly who to vote for.’”

So his dad’s an issue too.

“In case you haven’t heard, Sen. Ted Cruz (R-Texas) is not a fan of reality.

“The reality of science, that is. He has a history of saying global warming–denying talking points and used some of his political power just this past week to pressure NASA into downplaying its role in measuring the effects of global warming on the planet.”

My take is that the mainstream media always gravitate toward establishment candidates, in part because these politicians excel at fundraising and endorsements, which journalists highly value. That’s why the media consistently underestimate such insurgent candidates as Mike Huckabee and Rick Santorum before they catch fire.

But recent history suggests that the establishment Republican prevails in the end: Mitt Romney, John McCain, George W. Bush, Bob Dole. The question for 2016, up against Hillary, is whether this time could be different.

How about a conservative view? Here’s Allahpundit on Hot Air:

“The problem with finding a path for Cruz next year, though, is that as the field narrows and losers drop out, the primaries inevitability become a referendum on electability and acceptability. I can see Walker stumbling; I can see Jeb flaming out from voters’ Bush fatigue; I can see Paul stuck at 20 percent, unable to add to his libertarian base; and I can see Rubio never quite contending because he can’t scrape the votes he needs from the center and right. What I can’t see is all of those things happening, and realistically, they’d all have to happen to make Cruz the nominee.”

It’s a crowded field, to be sure. The thing that brought Cruz national fame was the filibuster and his leading role in the 2013 shutdown. To his supporters, Cruz was fighting for conservative principles against ObamaCare. To his critics, Cruz was pursuing a kamikaze strategy that could never have succeeded because the Democrats controlled the White House and the Senate.

The coming campaign will be a test of whether Cruz can break out beyond his evangelical base. But it will also be a test of the media establishment that views him mainly as a bomb-thrower.