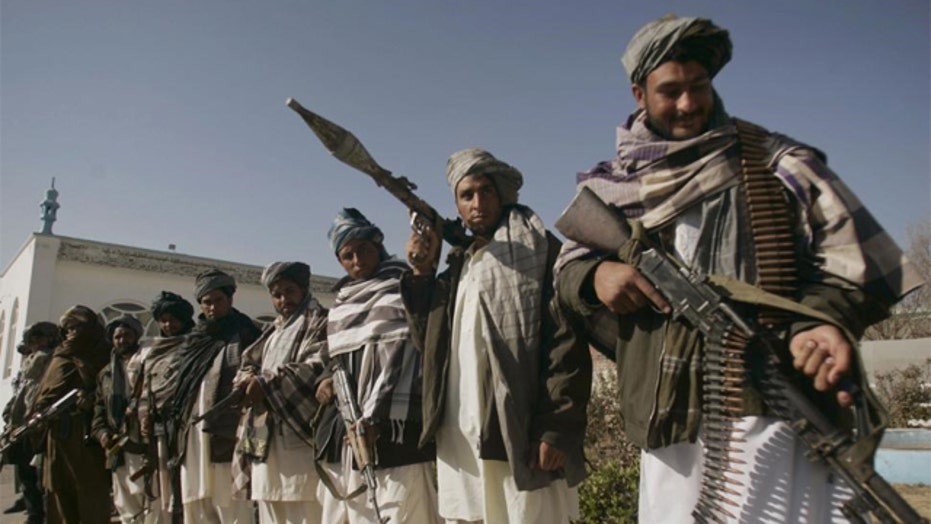 The Taliban are claiming that two senior members of the Haqqani terror network recently visited the five former Guantanamo detainees who were traded for an American soldier, raising new questions about the terms of their one-year house arrest in Qatar and eventual release in the spring as U.S. forces leave Afghanistan.

The Taliban statement, first reported by the Long War Journal, claims that Qari Abdul Rasheed Omari, a military commander for southeastern Afghanistan, and associate Anas Haqqani were taken into Afghan custody after visiting the former Guantanamo detainees in Qatar earlier this month.

At least one of the visitors is said to be related to one of the five detainees under house arrest. Charles "Cully" Stimson, who oversaw detainee affairs under President George W. Bush and heads the Heritage National Security Law Program, told Fox News: "We know that family visits are allowed."

He added: "I would expect that not only those two guys talked to the Taliban Five but others have already talked to them and they are in constant communications, preparing for their eventual return."

While the Taliban’s claim of a visit has not been independently verified, the Taliban are not known to provide patently false statements. The release posted online alleges American involvement, saying the two visitors were captured afterward.

"While returning home on 12th October after spending about a week both were captured by the American forces in Bahrain from where they were sent back to Qatar and then handed over to Kabul via United Arab Emirates,” the statement says. “It must be mentioned that the above mentioned journey took place under the watchful eyes of America before both men were handed over to Kabul despite the freed Guantanamo detainees being assured that their relatives may visit them unharmed."

Asked about the Taliban statement, and the reported meeting between known members of the Haqqani terror network and the former Guantanamo detainees, neither the government of Qatar nor the CIA provided comment. Significantly, no denial was issued.

The Pentagon, contacted about the report in advance of Tuesday’s briefing, appeared to be on the same talking points -- also offering no denial, and no detail.

The Long War Journal's Thomas Joscelyn describes Anas Haqqani as "the youngest son of veteran jihadist leader Jalaluddin Haqqani," and Qari Omari as the younger brother of Mohammad Nabi Omari, a senior Taliban official and former Guantanamo detainee who is among the five held by Qatar.

"This provides an additional reason the ‘Taliban Five’ should not have been transferred as the younger Omari oversees suicide operations in south eastern Afghanistan," Joscelyn said.

The five men in Qatar were part of the Obama administration's controversial deal in May with the Taliban, to swap the Guantanamo detainees for American Sgt. Bowe Bergdahl.Critics describe the five men as a kind of terror "dream team" because of their long-standing ties to the Taliban or Al Qaeda leadership.

"I don’t think we [the Bush administration] would have allowed the five to go to Qatar for a mere year under the conditions that we've read about," Stimson said, adding: "I think we would have struck a much harder bargain than that and maybe forced them to stay in custody for five years or longer under house arrest conditions so that we had more assurances than the one-year deal."