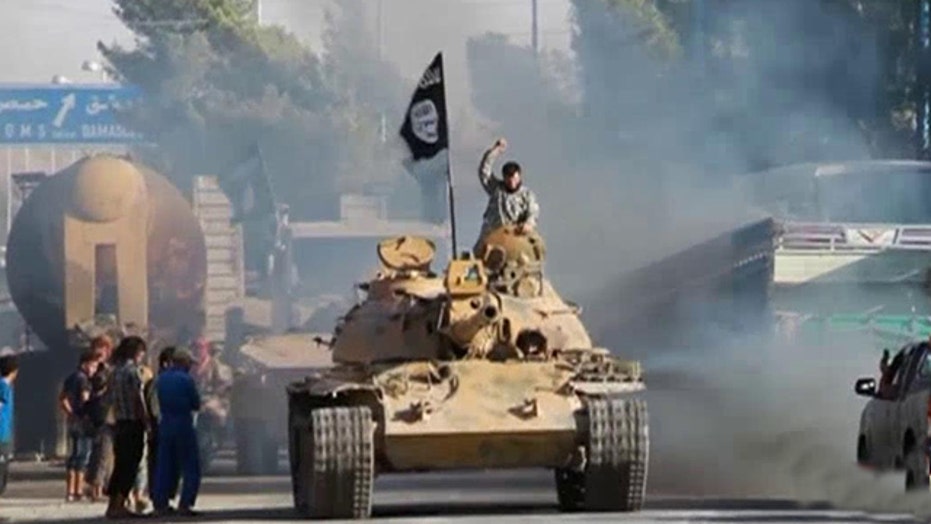 Syria's government on Monday demanded the Obama administration seek permission before launching any airstrikes on its territory against Islamic State targets, while the State Department indicated it had no intention of seeking "the approval of the Syrian regime."

The back-and-forth came as Defense Department and White House officials weighed the possibility of expanding airstrikes from northern Iraq into Syria. Other clashes were also erupting in the region, including warnings that another northern Iraq town faces the risk of a "massacre" at the hands of the Islamic State and apparent airstrikes by Middle Eastern militaries on Islamist militias in Libya.

In Syria, the question of whether the White House should authorize airstrikes has grown in urgency in recent days -- particularly after Islamic State militants last week beheaded an American journalist captured in Syria.

U.S. military officials have given mixed messages on how seriously airstrikes in Syria are being considered, saying most recently they would only be used to counter a threat to the U.S.

But Syria seemed intent on capitalizing on the growing clamor among some U.S. officials to expand the current American air campaign -- provided the Syrian government is a partner.

Speaking in Damascus, Syrian Foreign Minister Walid al-Moallem appeared acutely aware of how much has changed since last August, when the U.S. was threatening to carry out punitive airstrikes against Bashar Assad's government in the wake of the chemical attack. Since then, global disapproval has shifted away from Assad and toward the Islamic extremists who are fighting him and spreading destruction across Syria and Iraq.

Al-Moallem told reporters his government is ready "to cooperate and coordinate" with any side, including the U.S., or join any regional or international alliance against the Islamic State group. But he said any military action inside Syria should be coordinated with the government, "which represents Syrian sovereignty."

"Any strike which is not coordinated with the government will be considered as aggression," he said.

He said Damascus repeatedly has warned of the threat of terrorism and the need to cut off resources and funding, but "no one listened to us." Syria's government has long described the rebels fighting to topple Assad as "terrorists" in a foreign conspiracy.

The Obama administration has bristled at the thought of teaming up with the Assad government, while acknowledging they might have enemies in common.

"Just because the Syrian regime may be taking on ISIL or ...speaking publicly about that, and certainly the United States is, it certainly doesn't mean we're on the same side of the coin here," State Department spokeswoman Jen Psaki said on Monday.

Asked specifically whether the U.S. would have permission to act in Syria, she said: "I think when American lives are at stake, when we're talking about defending our own interests, we're not looking for the approval of the Syrian regime."

Despite al-Moallem's warning, there is little the Assad government could do should the U.S. decide to target the Muslim extremists inside Syria.

Referring to that failed mission, al-Moallem said: "Had there been prior coordination that operation would not have failed."

The Syrian government's warnings about the Islamic State group, though, ring hollow to many in the opposition, who have watched Damascus turn a blind eye to the Islamic militant's expansion in Syria for more than a year. Many even accuse the government of facilitating the group's rise at the expense of more mainstream rebel factions.

The breakaway Al Qaeda group is the most powerful faction fighting Assad's forces, which means a U.S. campaign to weaken the Islamic State extremists could actually strengthen a leader the White House has sought to push from office. Obama could try to counteract that awkward dynamic by also targeting Assad's forces, though that could drag the U.S. into the bloody, complex conflict -- something he has studiously tried to avoid.

Meanwhile, the Middle East was in danger of becoming even more of a tinderbox, as Egypt and the United Arab Emirates began launching airstrikes against Islamist militias in Libya.

A senior U.S. official confirmed the airstrikes, first reported by The New York Times, to Fox News. The U.S. reportedly was caught by surprise by the strikes.

And in Iraq, while the U.S. recently helped Iraqi and Kurdish forces take back the vital Mosul Dam -- and helped Yazidi minorities flee a mountain where they were trapped -- the United Nations warned over the weekend that a northeast Iraq town under siege by Islamic State militants since June faces risk of a "massacre," if urgent action is not taken to rescue residents.

Militants have surrounded the small Shia Turkmen community of Amerli, roughly 110 miles north of Baghdad, drawing comparisons to Islamic State's siege of Mount Sinjar, where thousands of Yazidi were trapped for weeks before U.S. air strikes drove the militants away. But this time, those trapped are Shia Muslims, who are reviled by the mostly Sunni Islamic State fighters.

The U.N. urged Iraq's allies and the international community to "work with the authorities to prevent a human rights tragedy."

BBC reports the victims are part of the Turkmen ethnic group, who compose roughly 4 percent of Iraq's population. But as Shia, they are considered apostates by the jihadist group.