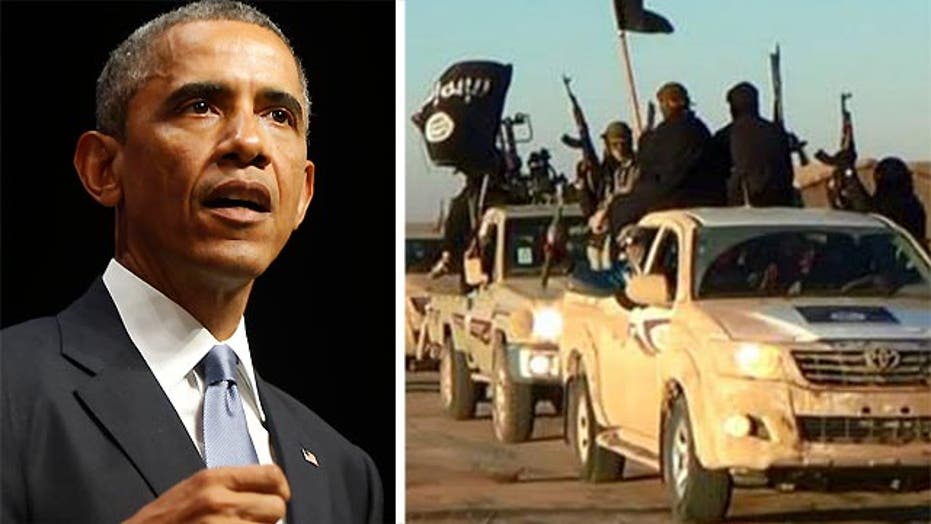 Admin pressured to outline an 'exact' plan for ISIS crisis

The president, when he speaks from the White House Wednesday night, is expected to on one hand seek Congress' support in arming and aiding the moderate Syrian opposition. But he is also keeping the door open for possible airstrikes in Syria, something that might require tacit cooperation from the Assad regime.

The target this time is not the Assad government, but the Islamic State, which has in the year since Obama's last address evolved into Assad's most formidable enemy -- as well as a threat to the Iraq government and the West.

The result could be Obama's trickiest task yet in the Middle East.

Going after the Islamic State, or ISIS, in Syria would be a boost for Assad's efforts to retain power. Yet the administration is trying to counteract that by aligning with moderate opposition groups.

According to one White House aide, the president is seeking more aid for the rebels so they could be the ground troops in place to support potential U.S. airstrikes against ISIS. The Obama administration already is pursuing a similar strategy in Iraq, where U.S. airstrikes are backed by Iraqi security forces on the ground -- as opposed to U.S. ground troops.

A White House aide told Fox News the president has already asked congressional leaders, with whom he met late Tuesday, to quickly pass a bill giving him the power to ramp up support to Syrian rebels.

The president, based on what he has told congressional leaders behind closed doors, appears unlikely to actually announce airstrikes in Syria during his address. But officials are expecting the president to give his strongest signals yet that he is moving closer to authorizing them.

A senior official also told The New York Times Obama is willing to order airstrikes inside Syrian territory, despite warnings from Syrian president Bashar al-Assad's government not to do so without their permission.

Administration officials said Obama will press forward with other elements of his plan without formal authorization from U.S. lawmakers. That could include wide-ranging airstrikes. Other elements of Obama's plan included increased support for Iraqi security forces, as well as military and diplomatic commitments from partner nations.

As for aid to rebels, the White House aide told Fox News the administration has existing funds that could be used to escalate support to the Syrian rebels -- including heavy arms -- and then they would come back to Congress for more money down the road.

The U.S. already has been running a small CIA program to train the rebels, but Obama is seeking approval for a more overt military effort that could involve staging training locations in countries near Syria. Administration officials told the Associated Press Obama also sees a congressional authorization for a Syrian train-and-equip mission as sending a strong signal to allies who are considering similar efforts.

Secretary of State John Kerry, meanwhile, traveled to the Middle East on Wednesday for discussions in Saudi Arabia and Jordan.

The Times reported that Obama will send a delegation to brief senators prior to his speech Wednesday.

"The president told the leaders that he has the authority he needs to take action against ISIL in accordance with the mission he will lay out in his address tomorrow night," the statement said in part. It added that Obama would "welcome" congressional support.

Some lawmakers say the president, under the War Powers Resolution, must seek congressional authorization within 60 days for such military action. But U.S. presidents have traditionally challenged that measure, and Obama advisers indicate they already have the authority they need.

A Boehner aide said that the speaker told Obama that he would he would support the president if he chose to deploy the military to help train and play an advisory role for the Iraqi Security Forces and assist with lethal targeting of ISIS leadership.

With Obama ruling out sending U.S. ground troops into combat in Iraq or Syria, bolstering the capacity of the Iraqi security forces and Syrian opposition will be crucial to efforts to root out the Islamic State militant group, which has moved freely across the blurred border between the two countries. U.S. airstrikes could help give the forces in both countries the space to make gains against the extremists.

The U.S. has already launched approximately 150 airstrikes against ISIS in Iraq, a mission undertaken at the invitation of the Iraqi government and without formal authorization from Congress. But the scope of the mission has been relatively limited to strikes that help protect American interests in the region and prevent humanitarian crises. U.S. officials said Obama was expected to loosen those limitations in his speech Wednesday.

At a private dinner Monday with foreign policy experts, Obama emphasized the importance of viewing the Islamic State as one organization, not two groups separated by a border.
Obama would still have to contend with the notion that American airstrikes against the Islamic State militants were actually helping Assad, who has overseen Syria's bloody civil war.

The U.S. has long called for Assad to leave power, and the Islamic State group is one of the groups inside Syria that is seeking to oust him.

However, Jane Harman of the Woodrow Wilson Center, who attended Monday night's dinner, told The New York Times that the president that he could order action in Syria without necessarily helping Assad, since ISIS currently holds ungoverned territory in the northeast of Syria that Assad's forces are unlikely to recover.