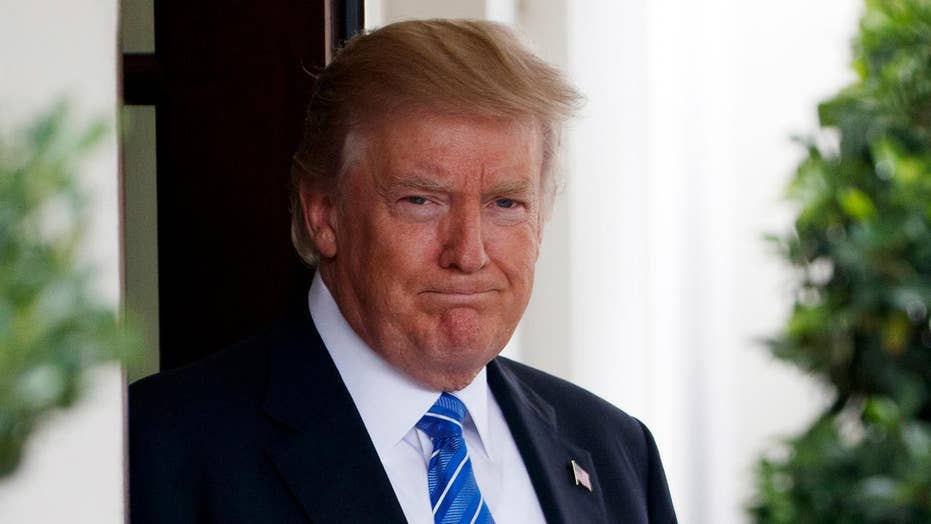 Trump to launch a cross country blitz for tax reform

The president is targeting both Republicans and Democrats to build momentum for his agenda; John Roberts has the roundup for 'Special Report'

The goal would seem to be right smack in the party’s wheelhouse: Republicans cutting taxes.

But so far, it hasn’t been easy.

Nearly eight months into an administration that hasn’t won a major victory on the Hill, there is plenty of motion but no plan.

President Trump’s initial goal was to achieve tax reform, and he might still be able to slash some deductions and declare victory. But reform involves a royal battle with every lobbying interest on the planet. At this point, the GOP would be thrilled to lower tax rates by Christmas and campaign on that in 2018.

The problem—and this may sound familiar—is that Republicans in Congress are divided.

"The White House and GOP congressional leaders agree with the goal of slashing the corporate income-tax rate and also cutting individual income taxes to benefit the middle class," says the Washington Post. "But they have yet to agree about which existing tax breaks should be eliminated to pay for it all."

For instance, the White House would like to ax the massively popular home mortgage interest deduction, but Hill folks say it’s too popular to kill—and they’re probably right.

The challenge with big tax cuts is paying for them, at least under the assumption, long argued by conservatives, that they shouldn’t blow a further hole in the deficit. You can get into rosy scenarios and dynamic scoring, but you need to find some offsetting dollars somewhere.

And then there is the classic split between Republicans who want to provide more relief for those at the top of the income scale and Democrats who attack such plans as a giveaway to the rich.

Trump’s new friends Chuck and Nancy may not be much help here, although it’s easier to wheel and deal when you’re giving money away. The Wall Street Journal editorial page says “if the president really wants Democratic votes on tax reform, he’ll have to prove first that he has 50 Republican votes to pass it in the Senate.” Only then, says the paper, could he get Heidi Heitkamp or Joe Manchin—two moderate Democrats who were at a bipartisan dinner at the White House last night--to provide the 51st vote. (Of course, he actually needs 60 votes in the Senate unless they use the budget reconciliation process, which failed on ObamaCare.)

National Review Editor Rich Lowry says the “dalliance with Schumer” can “only add another layer of distrust and dysfunction atop an already fraught relationship with the GOP leadership at a time when it is grappling with an enormously complex legislative task."

The president said over the weekend he will "ask for a speedup" in light of the devastation caused by Harvey and Irma. This creates visions of a grand bargain that ties together tax cuts, hurricane aid, the debt ceiling and legalizing the Dreamers program.

Tax cuts remain Trump’s best bet for a big legislative win in 2017. But it’s far from a done deal.