Almost 100 years ago, the Vermont-born former Massachusetts governor Calvin Coolidge was president — and widely considered the nation’s most conservative president alongside Ronald Reagan.

In 1936, only the states of Maine and Vermont went to Republican presidential nominee Alf Landon when Democratic President Franklin Roosevelt won a massive reelection landslide.

In the 1950s, a GOP political dynasty was born in Connecticut with the election of Sen. Prescott Bush.

Today, Maine Sen. Susan Collins is not only fighting for her political life in one of the most-watched races, but she is also is the last vestige of New England GOP representation in Congress from what was a heavily Republican region in a bygone era.

Although three of the six New England states —  Massachusetts, New Hampshire and Vermont — have moderate Republican governors, 10 of the region’s 12 senators are Democrats, while Maine’s junior senator, Angus King, is an independent who caucuses with Democrats.

Collins, likely the only Republican to vote against the confirmation of Amy Coney Barrett to the Supreme Court and one of three GOP senators to vote against repealing ObamaCare in 2018, is touting her bipartisanship -- but she's been blasted by President Trump over her Barrett stance. 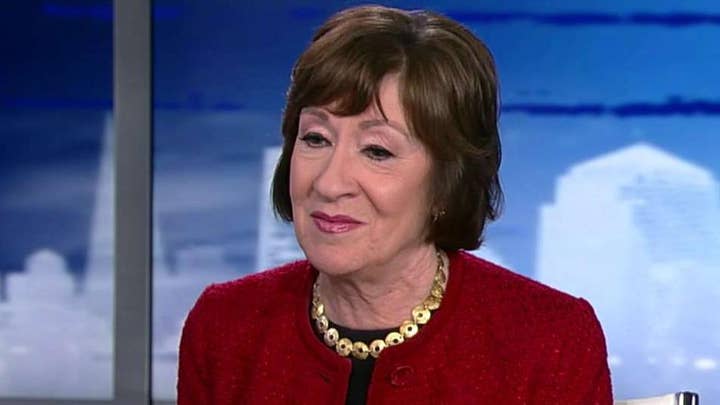 The moderate Collins is touting her bipartisanship along with federal money she’s steered toward Maine as a member of the Senate Appropriations Committee. During the COVID-19 pandemic, Collins was the co-sponsor of the Paycheck Protection Program, a forgivable federal loan program to businesses to encourage employers to keep workers on staff.

Her opponent, Maine’s Democratic Speaker of the House Sara Gideon, is challenging Collins for voting to confirm Justice Bret Kavanaugh to the Supreme Court, backing Trump’s tax cuts and for voting against removing Trump from office in the Senate impeachment trial in February. Former President Barack Obama recently did an ad for Gideon, who leads Collins by 4.2% in the Real Clear Politics average of polls. The Cook Political Report ranks the race as a tossup.

Gideon, who has been going on her “Health Care is on the Ballot” tour, says Collins voting for most of Trump's judicial nominees has endangered the Affordable Care Act.

Collins has survived the national headwinds before. She was first elected in 1996 when Democratic President Bill Clinton cruised to reelection. She also won in 2008, capturing all 16 counties and outperforming Obama in the state by 4%. Most recently, she was reelected in 2014 — a strong Republican year — by 23% over her opponent.

Nevertheless, in those past elections, Collins wasn’t the last congressional Republican standing in a former GOP stronghold.

“Historically, New England has been a Republican hotbed, but historically not a conservative one,” Matthew Gagnon, CEO of the Maine Policy Institute, a conservative state think tank, told Fox News. “It has been more a blue blood, WASPY group that supports big infrastructure projects, more like Teddy Roosevelt than Ronald Reagan.”

The GOP bench from the region was usually characterized as fiscally conservative and socially liberal. The Day, a newspaper in New London, Conn., editorialized early this year: “Washington was a better place when Republican senators such as John Chaffee of Rhode Island, Lowell Weicker of Connecticut and Edward Brooke of Massachusetts held sway. Executive power was held accountable and things got done.”

The American Conservative’s senior editor, Matt Purple, wrote in August, the regional shift began under President George W. Bush and escalated under Trump but has as much — or more — to do with attitude as policy.

“Bush’s tax cuts and deficits offended some of the region’s traditionally thrifty Republicans,” Purple wrote but added the national GOP “ceased to be a coalition of values and has instead become a vanguard in the culture war” focusing on pro-life policies, the Second Amendment and opposing political correctness that doesn’t fit with New Englanders.

The change in New England was less of a regional shift and more of a political change, Gagnon said.

“Overall, the politics has changed over several decades in the Northeast and the Democratic Party has built an infrastructure and outorganized Republicans,” Gagnon said. “But the idea is oversold that Republicans or conservatives can’t win in this region. We’ve seen in recent years that’s not true.

In 2016, Trump captured one electoral vote from Maine — one of two states that divide Electoral College votes by congressional districts. Trump lost the state by less than 3%. New Hampshire was also very close in 2016.

Gagnon referred to the former Maine Gov. Paul LePage’s victories in 2010 and 2014 and Sen. Scott Brown winning a U.S. Senate seat in Massachusetts in a 2010 special election. That said, Collins has built a different political base from LePage’s more conservative brand.

“Her coalition based around Democrats, independents and left-leaning centrists, is eroding,” Gagnon said. “LePage was elected and reelected with an entirely different base.”