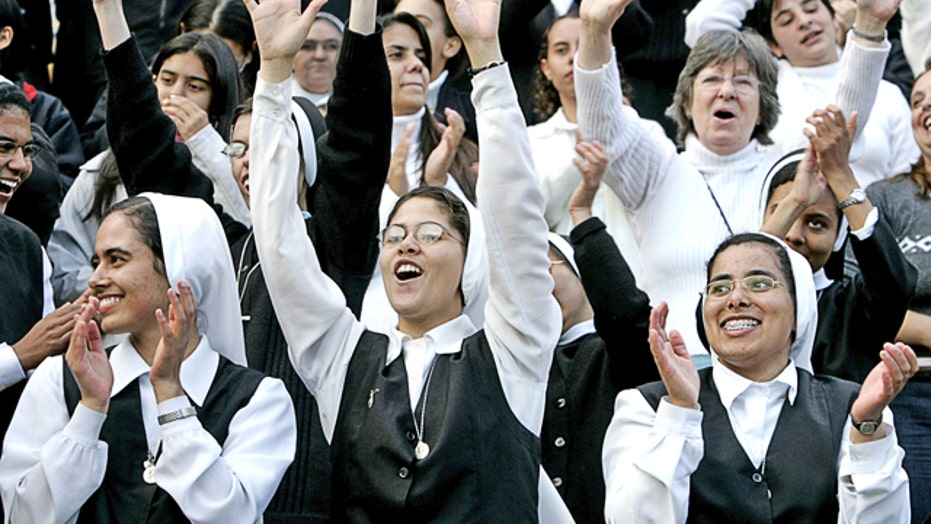 Nuns get ObamaCare exemption - for now

The Supreme Court has ruled a group of Catholic nuns will not have to comply with the contraception mandate in ObamaCare while their lawsuit plays out in court, if they declare their objections in writing.

The court ordered the group, the Little Sisters of the Poor, to inform the Department of Health and Human Services they will not comply with the requirement under the health care law that employers must offer contraceptive coverage.

If the group does so, the court says the injunction allowing them reprieve from the mandate will stand until the case is resolved.

Their nuns' lawyer, Mark Rienzi of the Becket Fund for Religious Liberty, said they were delighted to hear about the court's decision. "It made no sense for the Little Sisters to be singled out for fines and punishment before they could even finish their suit," he said.

Another of their attorneys, Daniel Blomberg, told Greta Van Susteren on “On the Record” Friday night the ruling “means the Little Sisters are protected. …Now they’re protected, at least, so they can have their day in court and go through and argue."

Asked the nuns’ reaction, Blomberg said, “They’ve been so amazing throughout the entire process. They take this very, very seriously. They think this is really, really important and so they’re delighted at this news.”

Under the health care law, most health insurance plans have to cover all Food and Drug Administration-approved contraceptives as preventive care for women, free of cost to the patient. Churches and other houses of worship are exempt from the birth control requirement, but affiliated institutions that serve the general public are not. That includes charitable organizations, universities and hospitals.

In response to an outcry, the government came up with a compromise that requires insurers or health plan administrators to provide birth control coverage but allows the religious group to distance itself from that action. The exemption is triggered when the religious group signs a form for the insurer saying that it objects to the coverage. The insurer can then go forward with the coverage.

A group of Denver nuns who run nursing homes for the poor, called the Little Sisters of the Poor Home for the Aged, say signing that form makes them complicit in providing contraceptive coverage, and therefore violates their religious beliefs.

The high court exempted them from the government form requirements, saying the nuns only have to inform HHS in "writing."

"To meet the condition for injunction pending appeal, applicants need not use the form prescribed by the government and need not send copies to third-party administrators," the justices' order said.

Rienzi said the court's order also will provide protection to more than 400 other Catholic organizations that receive health benefits through the same Catholic benefits provider, Christian Brothers. It's one of the religious health care providers that is exempted from the health care law's requirement to provide contraceptive coverage and has said all along that it will not make contraceptive coverage available.

Justice Sonia Sotomayor blocked the contraceptive coverage mandate for the nuns on New Year's Eve, only hours before portions of the law's coverage went into effect.

"The Supreme Court emphasized that the order `should not be construed as an expression of the court's views on the merits,"' Levin said. "We are confident that once the merits in this case are fully considered by the 10th Circuit, it will once again uphold the birth control regulations as it did in December."

The Supreme Court already has decided to rule on whether businesses may use religious objections to escape a requirement to cover birth control for employees. That case, which involves Hobby Lobby Inc., an Oklahoma City-based arts and crafts chain with 13,000 full-time employees, is expected to be argued in March and decided by summer.