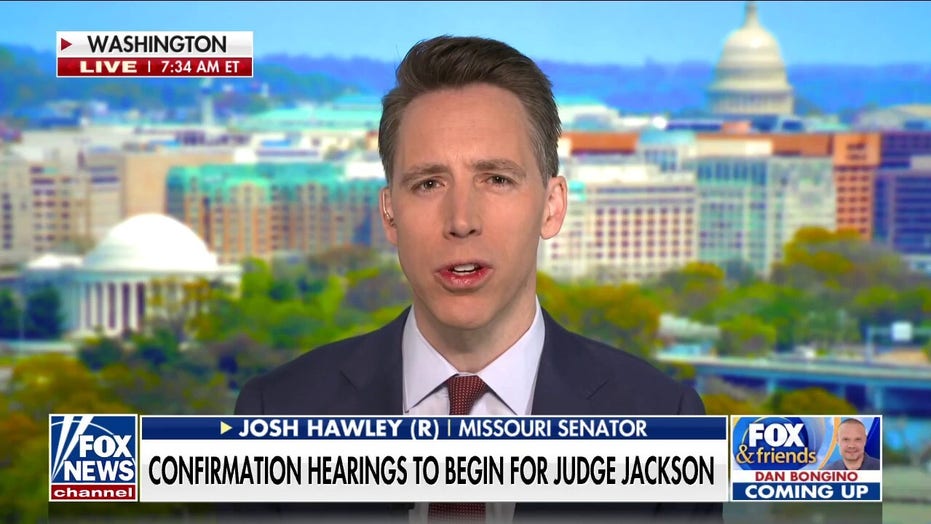 The Senate is considering the Supreme Court nomination of Judge Ketanji Brown Jackson Monday morning, as Republicans and Democrats lay the groundwork for a historic confirmation fight.

"[Y]ou come from a law enforcement family. Yet despite that shared family experience, despite your record, we've heard claims that you have, quote, soft on crime," Senate Judiciary Committee Chairman Dick Durbin, D-Ill., said.

"These baseless charges are unfair," he added. "They fly in the face of pledges my colleagues made that they would approach your nomination with civility and respect and fact checkers, including The Washington Post, ABC News and CNN have exposed some of these charges as falsehoods."

Judge Ketanji Brown Jackson speaks after President Biden announced Jackson as his nominee to the Supreme Court in the Cross Hall of the White House, Friday, Feb. 25, 2022, in Washington.  (AP Photo/Carolyn Kaster)

But Ranking Member Chuck Grassley, R-Iowa, appeared set up an attack against Jackson not just that she's soft on crime, but that she's willing to let her personal opinion dictate the outcome of a case.

"The most important thing that I look for is a nominee's view of the law, judicial philosophy and view on the role of a judge in our constitutional system," he said. "I'll be looking to see whether Judge Jackson is committed to the Constitution as originally understood."

"The courts are not vested with a policymaking authority. According to our Constitution, courts hear cases and controversies and decide them. Nothing more, nothing less," Sen. John Cornyn, R-Texas, added. "That's an important distinction to remember in the days that lie ahead."

"This is going to be about your philosophy," Sen. Lindsey Graham, R-S.C., said. "We're going to ask you what we think you need to be asked and, Senator Hawley. You need to ask her about her record as a district court judge… Very fair game."

SUPREME COURT CONFIRMATION HEARINGS HAVE REPUTATION FOR BEING POLITICAL CIRCUSES, DESPITE OFTEN BEING TAME 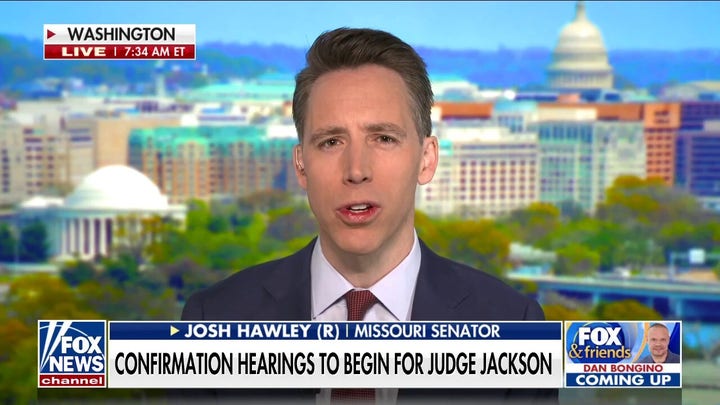 "There is simply no evidence to support these unfounded attacks," Blumenthal added.

Sen. Patrick Leahy, D-Vt., was also among the Democrats who dismissed the GOP attacks against Jackson as off-base.

"Judge Jackson is no judicial activist. She is not a puppet of the so-called radical left. She's been praised by Republican appointed judges for her jurisprudence," Leahy said. "She's not soft on crime. Her background as a federal public defender would bring an informed perspective."

Her first introducer will be Judge Thomas Griffith, who sat on the U.S. Court of Appeals for the D.C. Circuit while Jackson was a district judge in D.C. Griffith, notably, is considered a conservative legal luminary who was appointed to the D.C. Circuit by former President George W. Bush.

GOP attacks are unlikely to keep Jackson from being confirmed with Democrats holding the thin Senate majority. And Republicans stressed repeatedly they won't go into personal attacks against the judge and will stick to her record.

But the hearings may largely serve as a forum to increase name recognition for the 2024 presidential election, when Hawley and Sens. Ted Cruz, R-Texas, and Tom Cotton, R-Ark., may be GOP contenders. More immediately, Republicans hope to use Jackson as a proxy for their attempts to paint Democrats as soft on crime ahead of the crucial 2022 midterms.

The history of the moment is also not lost in the hearing room Monday.

"The arc of the moral universe is long and it bends towards justice," Sen. Cory Booker, D-N.J., said. "Well, today, America is witnessing the literal bending of the arc."

"The Supreme Court has a long and storied history... The reality is the court's members in one respect have never really reflected the nation they served," Durbin said. "In more than 230 years, the Supreme Court has had 115 justices. One hundred-eight have been White men... No justice has been a Black woman. You, judge, can be the first." Durbin said Jackson will inspire "millions."

"I have said in the past, and I think it's good for the court to look like America. So count me in on the idea of making the court more diverse," Graham said.

"Judge Jackson, you know, with your presence here today, you are writing a new page in the history of America, a good page," Leahy said.