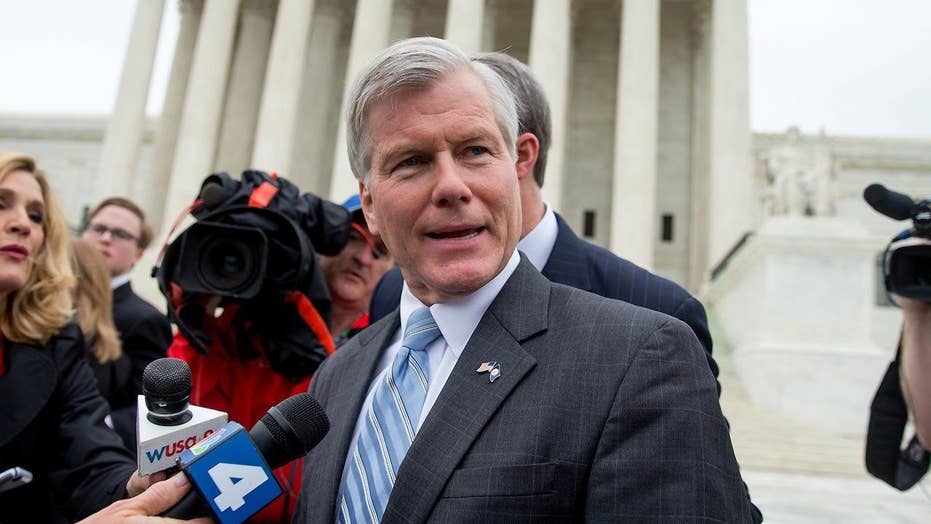 WASHINGTON – The Supreme Court on Wednesday seemed poised to overturn the conviction of former Virginia Gov. Bob McDonnell on political corruption charges and place new limits on the reach of federal bribery laws.

Justices across the ideological spectrum expressed major concerns that the laws give prosecutors too much power to criminalize the everyday acts that politician perform to help constituents.

Chief Justice John Roberts said it was "extraordinary" that dozens of former White House attorneys from Democratic and Republican administrations submitted legal papers saying that upholding McDonnell's conviction would cripple the ability of elected officials to do their jobs.

"I think it's extraordinary that those people agree on anything," Roberts said.

Justice Breyer said the law presents "a real separation of powers problem" and "puts at risk behavior that is common."

"That's a recipe for giving the Department of Justice and prosecutors enormous power over elected officials," Breyer said.

McDonnell, who was in the courtroom with his wife Maureen to watch the arguments, was convicted in 2014 of accepting more than $165,000 in gifts and loans from a wealthy businessman in exchange for promoting a dietary supplement.

At issue is a federal law that bars public officials from accepting money or gifts in exchange for "official acts." The court is expected to clarify what distinguishes bribery from the routine actions that politicians often perform as a courtesy to constituents.

But the justices struggled over how to draw that line. Both Roberts and Breyer suggested the bribery law could be considered unconstitutionally vague.

McDonnell insists his role in setting up meetings and hosting events for Star Scientific Inc. CEO Jonnie Williams was part of the customary services doled out by every politician. There is no dispute that McDonnell and his wife hosted a product launch for Williams at the governor's mansion, attended other events promoting Star Scientific's products and asked other state officials to meet with Williams.

Arguing for McDonnell, attorney Noel Francisco said the former governor never put any pressure on those officials and that Williams never got the official government action he wanted -- state funding for Virginia's public universities to conduct clinical studies on the dietary pills.

Francisco said setting up meetings, going to conferences and encouraging public officials to consider Williams' proposal never crossed the line "in trying to influence the outcome of an official decision."

Justice Sonia Sotomayor asked about evidence that university officials said they felt pressure from the governor to help Williams. Francisco said the jury instructions were flawed. He said jurors should have been told they had to find whether McDonnell actually tried to influence an official government decision.

Justice Department lawyer Michael Dreeben said the line McDonnell wants to draw "is a recipe for corruption, not a recipe for drawing a safe harbor for public officials."

Dreeben told the justices it was enough that McDonnell accepted personal benefits from Williams on the understanding that he would take official action to assist Williams in return. He said it would be "stunning" for the court to find that bribery laws in place for decades are too vague.

But Justice Anthony Kennedy said it "would be absolutely stunning to say the government has given us no workable standard."

The Supreme Court has several options if it decides to overturn the conviction, according to Jeffrey Bellin, a professor at William & Mary Law School. It could find the jury instructions were too broad and give prosecutors another chance to retry the case. The justices could also rule that evidence offered by prosecutors did not show unlawful conduct under federal corruption laws, giving prosecutors no chance of retrying the case. Or the court could strike down the law itself as unconstitutionally vague.

Williams loaned the couple tens of thousands of dollars to help them pay off debts, bought a Rolex watch for Bob McDonnell and purchased nearly $20,000 in designer clothes for McDonnell' wife, Maureen. He also gave them $15,000 to cater their daughter's wedding and paid for trips and golf outings for the couple and their children. Prosecutors said McDonnell usually responded within days of each gift to help garner support for Williams' supplement.

"Never during any time in my 38 years of public service have I ever done anything that would abuse the powers of my office," McDonnell told reporters in brief remarks outside the court following the arguments.

McDonnell is facing a two-year prison sentence, while his wife, who also was convicted in the case, has been sentenced to one year and one day in prison. McDonnell remains free while his appeal is being considered; his wife's appeal is on hold until the high court decides her husband's case.