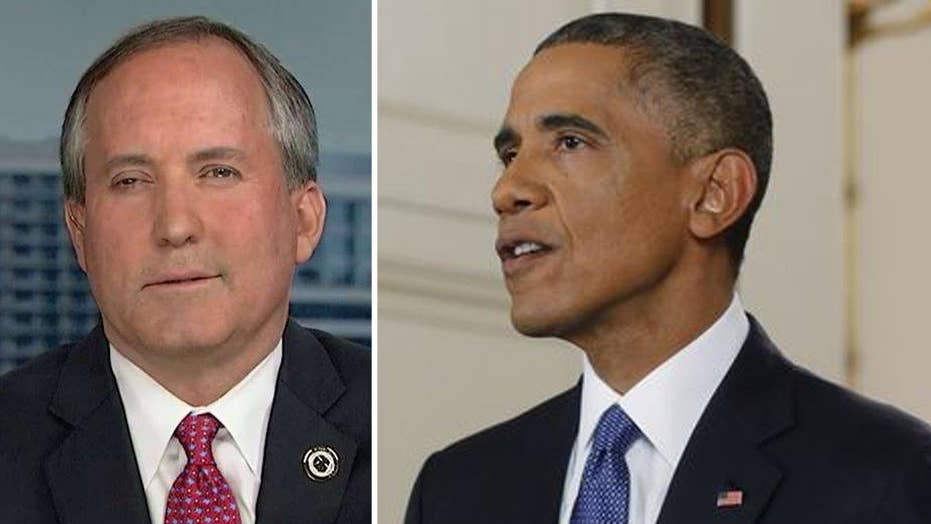 In the end, the Supreme Court may fill in the blank.

By agreeing to hear a challenge to Obama's immigration plan, the court on Tuesday raised hopes that Obama may have one last chance to make good on an unfulfilled promise to millions of immigrants, many of whom feel abandoned by his administration's recent deportation raids.

If the court sides with Obama, ruling that he has the authority to unilaterally shield up to 5 million immigrants from deportation, Obama would claim a sizable last win on an issue that has dogged him for years. His administration would, however, face another challenge — implementing a complex program in a matter of month as Republicans vow to reverse it just as quickly.

If the court rules against Obama, he could spend his last months in office making headlines for deporting people, rather than shielding them from deportation, as he'd planned.

At issue are Obama's actions to allow parents of U.S. citizens to stay in the country, along with an expansion of Obama's earlier program protecting people brought to the U.S. illegally as children — known as Dreamers. Lower courts have put those programs on hold amid claims Obama exceeded his authority, but the Supreme Court agreed to have the final word.

Advocates said they see the pivot point as a reflection of the seesaw nature of Obama's record on the issue. Despite his efforts to pass immigration legislation and use his executive power to protect some immigrants, his broader deportation policy led activists to label him the "deporter-in-chief" and left wounds some say won't be healed.

Most recently, advocates were incensed by deportation raids targeting 121 Central American immigrants, arguing the raids sowed fear and skepticism in a community that could make it harder for advocates and the administration to persuade people to come forward later.

Angela Maria Kelley, an immigration expert at the liberal Center for American Progress, likened Obama's policies to a "high school romance: One minute you're in love, the next you're being dumped.

"It does feel like it can take on a bipolar presence in the community," Kelley said.

The Supreme Court is expected to rule on Obama's executive action by late June. That would leave Obama with barely half a year to get the program up and running before his presidency ends. Most of the Republicans running to replace Obama have already vowed to tear up the program if elected.

Obama's expanded program for people brought here as children was hours away from being launched last year when a judge put it on hold, so ostensibly, the administration could flick the switch on almost overnight with little additional preparation.

But the much larger program for parents of U.S. citizens wasn't nearly as far along when the court shut it down.

Ahead of the injunction, U.S. Citizenship and Immigration Services had secured office space in Arlington, Virginia, for a new processing center, with plans to hire about 1,000 people to screen applications. But the administration would have to hire and train those workers, finalize the forms and application process, and disseminate that information to applicants.

Administration officials predicted that could take anywhere from a few weeks to a couple of months. By comparison, it took 60 days to launch the initial program covering people brought here as children.

Another hold-up could come from applicants, who would need to pull together application fees and documents proving they've been in the country for years. How quickly the government could process applications is another question.

In the first six months of Obama's earlier program for people brought here as children, 200,000 were approved out of roughly 423,000 applications.

Working against the president is deep uncertainty about what happens to those who apply for protection if a Republican who opposes Obama's actions wins the White House. New applications would almost certainly be halted, but immigration advocates predicted the next president would find it harder to retract work permits from those approved before Obama leaves office.

"There's a real question right now of whether people are safe from deportation, not the least because in the last few weeks we've seen increased raids by the president," said Karen Tumlin, legal director at the National Immigration Law Center. "But folks are so eager to have the protections from family separation, if the chance does present itself, I would anticipate a tremendous outpouring of interest."