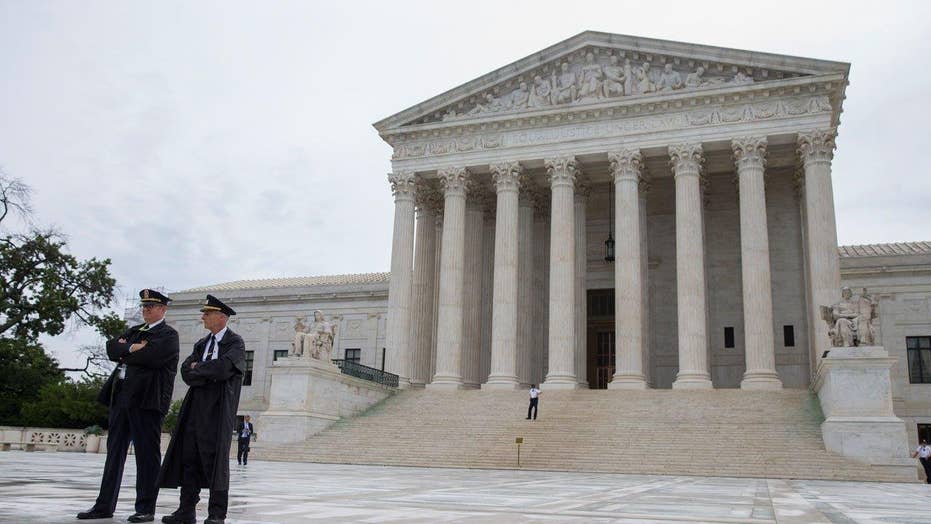 Strategy Room: David Morey and Charmaine Yoest on how the presidential candidates respond to the decision

Donald Trump thinks Justice Clarence Thomas is "very strong and consistent" and praises colleague Samuel Alito -- with those robed role-models in mind, the GOP nominee already has floated 21 people he thinks would be perfect companions on the Supreme Court.

Democrat Hillary Clinton, for her part, spontaneously "loved" the idea of a Justice Barack Obama, but has been coy on others she thinks deserve a bench nomination.

Even with the Supreme Court kicking off its term Monday, it is this election-year guessing game – over whom the eventual winner will nominate to fill the court vacancy left by Antonin Scalia’s death – that’s captured the attention of court watchers.

The uncertainty, meanwhile, has left the court itself seemingly tip-toeing around major issues, as justices wait for a nomination – and confirmation – to break what is essentially a 4-4 split.

Nothing less than the ideological balance of the court is at stake on Nov. 8.

Despite recent GOP trial balloons hinting otherwise, President Obama's choice of Judge Merrick Garland may not get a Senate hearing and vote, leaving it for the next White House occupant to put his or her instant legacy-building stamp on the third branch of government.

A Clinton pick could signal a decisive shift to the left for the first time in decades.

"Any issue you care about, the Supreme Court is ultimately where it's going to be decided. There are a lot of people that rank this as an important issue for them during this election year," said Carrie Severino, chief counsel at the conservative Judicial Crisis Network.

She said if Clinton is elected, "it would have a very dramatic shift on the court, and an incredible impact for a generation."

The Supreme Court, meanwhile, churns along gingerly with an ideologically divided 4-4 bench, preparing to kick off its term Monday with a less-than-impressive docket so far. Caution over its short-term future may leave the justices reluctant to engage for now in divisive cases, absent a long-term five-vote majority.

Several appeals dealing with the death penalty, criminal law and voting districts have strong racial underpinnings, and will be argued this fall.

"When you think about the rights in the balance, whether it's racial equality, gender equality, reproductive access, religious liberty, all of these issues that go to the Supreme court, Americans care deeply about," said Elizabeth Wydra, president of the progressive Constitutional Accountability Center. "So I think they care deeply about who will be appointing the next justices."

Until then, some on the court worry an eight-member bench will shy from fully deciding contentious cases -- opting to rule on narrow aspects, or splitting evenly where no binding precedent is established.

"A tie does nobody any good," Justice Elena Kagan said earlier this month. "We're there to resolve cases that need deciding, answer hotly contested issues that need resolving, and you can't do that with a tie vote."

For issues like abortion, executive power, health care, and national security -- who sits on the Supreme Court matters. In the years between 1969 and 1993, Republican presidents placed 11 members on the high court, including two chief justices. Democrats got zero.

In the two-dozen years since, one Republican leader appointed only two justices -- Alito and Chief Justice John Roberts -- while a pair of Democrats successfully named four. Garland remains a wild card.

Members of the high court know that political reality all too well.

"It's likely that the next president, whoever she will be, will have a few appointments to make," an increasingly chatty Justice Ruth Bader Ginsburg said in July.

Her recent comments on Trump drew bipartisan scorn. "He is a faker," she told CNN. "He has no consistency about him. He says whatever comes into his head at the moment. He really has an ego."

Ginsburg offered regrets for her "ill-advised" remarks, but not a direct apology to Trump.

The GOP nominee also drew criticism for suggesting last month that "Second Amendment people" might not take kindly to Clinton's judicial choices if she wins in November. He denied suggesting violence against anyone for their views.

As for Clinton, legal and political sources close to her campaign are privately suggesting she, if elected, could preserve the status quo and re-nominate the well-liked moderate-liberal Garland next January, avoiding a bruising confirmation in her first 100 days with a potentially more left-leaning pick.

The nominee herself has said little about her options, except for one.

"I love that, wow," she told supporters in February when someone suggested she name her former boss, Obama.

Clinton also has said she has a "litmus test" for a justice nominee, and emphasized any potential appointments would have to support the Voting Rights Act and campaign finance reform.

Trump’s list includes a mix of state and federal judges -- all conservatives. The Republican says he would appoint "pro-life" justices who are "very conservative" and "like Judge Scalia."