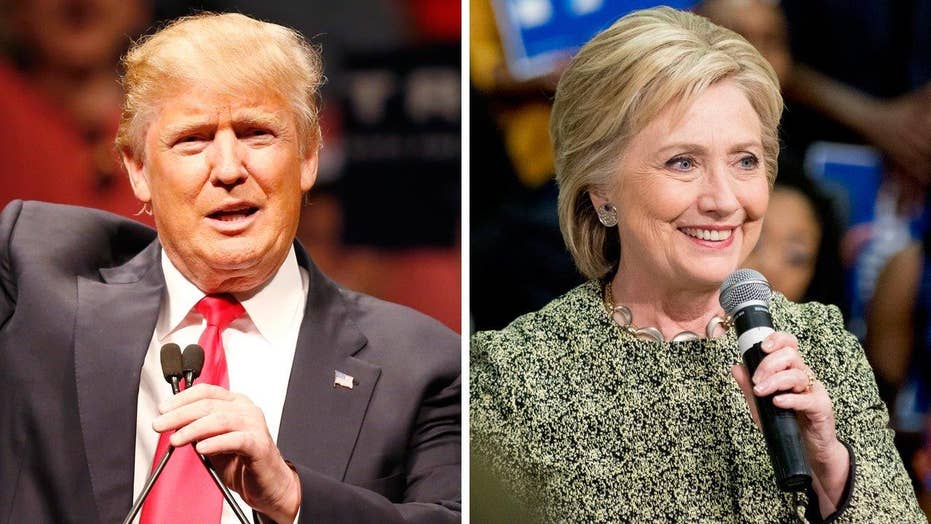 Trump, Clinton lead the polls ahead of Super Tuesday

The Democratic and Republican presidential candidates are charging into Super Tuesday in a coast-to-coast battle for delegates across a dozen states -- but while they're looking for as many wins as possible, a few select states stand out as the crown jewels.

At the top of that list, in both primary contests, is Texas. The Lone Star State has the biggest cache -- 222 Democratic delegates and 155 for Republicans.

And perhaps no candidate is fighting harder for that prize than Texas Republican Sen. Ted Cruz. The senator went all out on Monday, holding rallies in voter-rich Dallas, Houston and San Antonio in hopes of at least defeating national front-runner Donald Trump in Cruz's home state.

“We are going to have a very good Super Tuesday,” Cruz assured the Dallas crowd. Cruz has maintained a polling lead in the state, but knows a surprise loss there could doom his campaign.

For Republicans, the second-biggest prize is Georgia, with 76 delegates at stake. Both Trump and Florida Sen. Marco Rubio put in face time with voters Monday in the final hours before polls open, while Cruz stayed rooted in Texas.

On the Democratic side, too, Hillary Clinton and Bernie Sanders have focused their efforts.

While Clinton declared Saturday night after her decisive win in the South Carolina primary that the campaign was going “national,” the former secretary of state was concentrating Monday on two delegate-heavy states -- the Democratic-stronghold of Massachusetts (91 delegates) and Virginia (95 delegates).

Solid wins there and beyond on Super Tuesday could give her a nearly insurmountable delegate count toward the nomination.

Clinton to date leads Sanders in the delegate count 543-to-85, including so-called superdelegates. They will compete for 865 delegates on Tuesday and a total of roughly 1,800 delegates over the next two weeks, with 2,382 needed to win the nomination.

The delegates on the line in 11 states Tuesday represent a third of those needed to clinch the party nod.

And on the GOP side, 595 delegates are on the line Tuesday across 11 states -- nearly half the number needed to secure the nomination.

Sanders is focusing on Minnesota and Colorado, progressive states where he hopes his message of social and economic equality will translate into votes.

“Americans don’t need crumbs, they need the whole loaf,” Sanders said at a rally in Minneapolis.

He is expected on Tuesday to win his home state of Vermont, which has 16 Democratic delegates. Minnesota is worth far more, with 77 delegates.

Still, many of these contests divide delegates proportionally, and so Sanders is poised to walk away with some, even where he loses. His strategy appears to be to at least survive Tuesday, with hopes of a resurgence later this month in Maine and Rust Belt states like Michigan and Ohio.

On the Republican side, Trump has won three straight -- the New Hampshire and South Carolina primaries, and the Nevada Republican Caucus -- garnering 82 delegates.

Cruz kicked off the 2016 balloting by winning the Iowa Republican Caucus. He has 17 delegates, ahead of Florida GOP Sen. Marco Rubio with 16.

The billionaire businessman leads by double-digits in Alabama, Georgia, Massachusetts, Oklahoma, Tennessee and Virginia, according to RealClearPolitics poll averages. Roughly 53 percent of the GOP’s 595 delegates on Tuesday are in those states.

Those polls were released before Trump over the weekend initially declined to disavow the backing of former KKK leader David Duke, which Rubio says makes him “unelectable.”

Trump has since disavowed the support and blamed his original handling of the question on a faulty earpiece.

The tough race is taking a toll on the candidates. Rubio, barnstorming the South to take hold of the GOP establishment mantle, temporarily lost his voice at a rally outside of Atlanta and needed South Carolina Gov. Nikki Haley, who has endorsed him, to take the microphone.