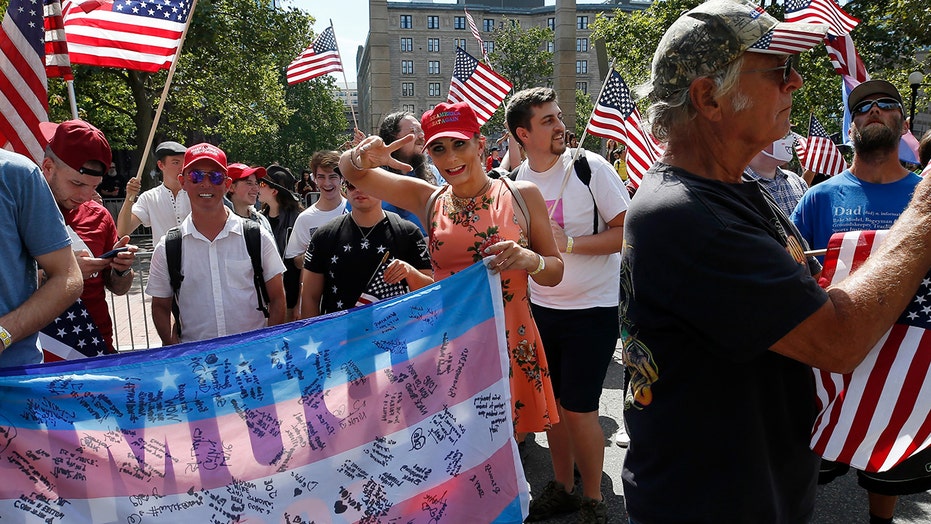 Rep. Alexandria Ocasio-Cortez slammed a “Straight Pride” parade in Boston on Saturday and what she said appeared to be a lack of women, calling it an "I-Struggle-With-Masculinity" parade.

“For men who are allegedly so ‘proud’ of being straight, they seem to show real incompetence at attracting women to their event,” Ocasio-Cortez wrote along with a retweet of footage from the march. “Seems more like a ‘I-Struggle-With-Masculinity’ parade to me.’”

The "Straight Pride" parade was met with counter-protests and reportedly led to a handful of officers suffering injuries and almost three dozen arrests. The controversial rally held in the downtown area led to a clash between Super Happy Fun America, the group that organized the parade, and protesters who criticized the event as homophobic.

The Boston Police Department said it plans to review officers’ use of force during the demonstrations, and will also look into reports of four officers who suffered non-life threatening injuries.

About 200 people marched in the “Straight Parade” to celebrate traditional families and defend heterosexuality, reported the Boston Globe. Marchers were reportedly outnumbered along the parade route by thousands of protesters, who gathered behind police barricades near City Hall.

Counterprotesters, including one wearing a horse mask, line the route of the Straight Pride Parade in Boston, Saturday, Aug. 31, 2019. (AP Photo/Michael Dwyer)

Parade participants held up signs promoting pro-military and pro-Trump messages, including “Support our troops” and “Build the wall and crime will fall.” according to local FOX affiliate WDAF-TV.

Counter-protesters hit back at marchers with chants of their own.

“Alt right, get off our streets, no justice, no peace,” protesters said.  They also aimed their focus at police, reportedly chanting, “Who do you serve? Who do you protect?”

“I’m outraged by the idea that straight people need a pride parade,” parade attendee Shoshanna Ehrlich told WDAF-TV. “We are not an oppressed majority by any stretch of the imagination. This is full of hate and offensive.”

'STRAIGHT PRIDE' GROUP UNFAZED AFTER COUNTER-PROTESTERS OUTNUMBER THEM AT RALLY

According to the event organizing group’s website, the purpose of the “Straight Pride” parade was to “achieve inclusivity and spread awareness of issues impacting straights in Greater Boston and beyond.”

The group claims it “advocates on behalf of the straight community in order to build respect.”

The Saturday march was also condemned by Rep. Ayanna Pressley, who represents the Boston area. The Democrat congresswoman slammed the event as a “hate march.”

“TY to the allies & accomplices who stood in the gap & laid their bodies on the line today in affront #LGBT hate march,” Pressley said in the statement Saturday. “To everyone feeling unseen & vulnerable today...we got you. Equitable outrage. Our destinies & freedoms are tied.”

On Sunday, Boston police confirmed 36 people had been arrested and charged. They are due to be arraigned in municipal court.

“We respect the rights of individuals to protest and take part in the democratic process. However, that right never trumps acts of violence or behavior that creates a risk for other participants, bystanders, or police,” Renee Alagrin, a Suffolk District Attorney’s office spokesman, said in a statement.

“We’re reviewing each arrest and will make informed decisions based on the facts of each and the policies of this office.”