Fallout from Steve Bannon's ouster from the White House

Reaction and analysis from the 'Special Report' All-Star panel

Steve Bannon is on his way out at the White House – but the fiery, anti-establishment conservative who helped Donald Trump win the presidency says he's getting ready to wage his populist campaign from the outside.

“If there’s any confusion out there, let me clear it up: I’m leaving the White House and going to war for Trump against his opponents -- on Capitol Hill, in the media, and in corporate America,” Bannon told Bloomberg on Friday.

Bannon returned to work late Friday at Breitbart News, the populist news site he once ran that rails against the political establishment in both parties.

He spent just over a year formally working for the president. On Friday, his job with Trump came to an end.

STEVE BANNON OUT AT THE WHITE HOUSE

“White House Chief of Staff John Kelly and Steve Bannon have mutually agreed today would be Steve's last day,” White House Press Secretary Sarah Sanders said. “We are grateful for his service and wish him the best.”

“The populist-nationalist movement got a lot stronger today,” said Breitbart News Editor-in-Chief Alex Marlow. “Breitbart gained an executive chairman with his finger on the pulse of the Trump agenda.”

Ben Shapiro, a former writer at Breitbart News, predicted Bannon will go back to the site and "declare himself the conscience of the nationalist populist movement that he helped build.”

"He's going to use that power to smash the president when he thinks the president is wrong," Shapiro told Fox News anchor Sandra Smith. 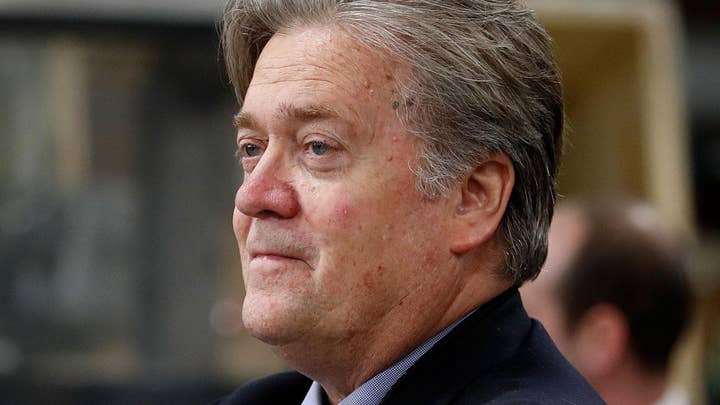 A source close to Bannon told Fox News there is “no way” the outgoing adviser will go to war against Trump himself. He will “100 percent have POTUS’ back,” the person said.

Another source close to Bannon, reached Friday, suggested Breitbart is gearing up for a fight now that its leader is no longer restrained by his job in the White House.

Kurt Bardella, a former Breitbart staffer who now criticizes the outlet and President Trump, speculated Bannon would “continue to use his weapon of choice, Breitbart, to attack his adversaries inside the West Wing.”

“In many ways, I think Steve will feel liberated,” Bardella said.

He added, “Now, he will be able to operate openly and freely to inflict as much damage as he possibly can on the 'globalists' that remain in the Trump administration.”

Bannon told The Weekly Standard he spoke with the president and Chief of Staff John Kelly last week about resigning on Aug. 14, his one year mark working for Trump. But the events in Charlottesville last weekend delayed his departure.

“I’d always planned on spending one year.... I want to get back to Breitbart,” he said.

Bannon said he feels “jacked up” as he returns to the conservative news site.

“Now I’m free,” he said. “I’ve got my hands back on my weapons. Someone said, ‘it’s Bannon the Barbarian.’ I am definitely going to crush the opposition. There’s no doubt.”

He added, “I built a f---ing machine at Breitbart. And now I’m about to go back, knowing what I know, and we’re about to rev that machine up. And rev it up we will do.”

Earlier this week, Trump briefly addressed the speculation about Bannon's future during a wide-ranging Q&A with reporters at Trump Tower.

The president added, “We’ll see what happens with Mr. Bannon.”