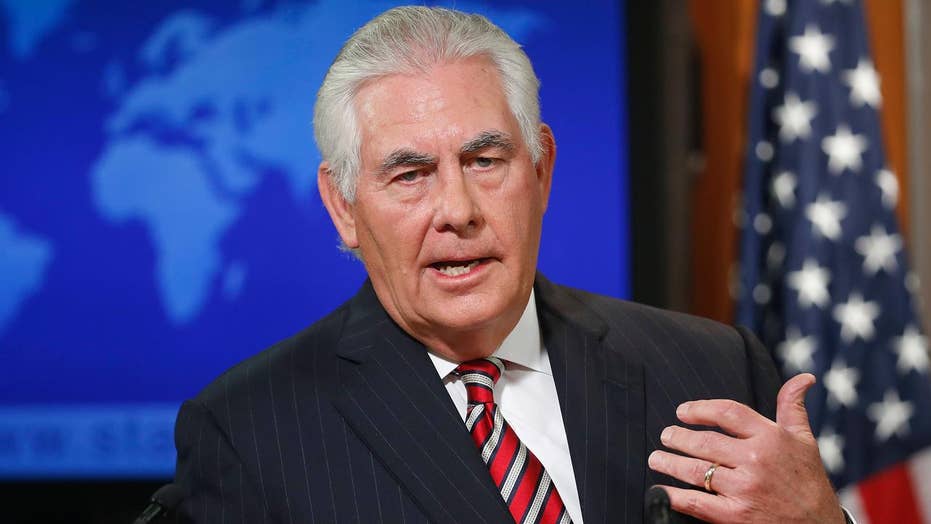 President Trump and his allies have clamored for months that Senate Democrats are stonewalling top-level appointees -- but the president indicated Tuesday that hundreds of vacancies might just go unfilled.

The president cast the decision as part of an effort to shrink the government. On a similar track, Secretary of State Rex Tillerson a day earlier told Congress that most of his agency's special envoy positions -- including dozens from the Obama administration -- will be eliminated and their responsibilities reassigned.

Among the positions on the chopping block are envoys dedicated to climate change and the Iran nuclear deal.

"Today, nearly 70 such positions exist within the State Department, even after many of the underlying policy challenges these positions were created to address have been resolved," Tillerson wrote in a letter to Congress.

Trump underscored the administration's approach in a tweet Tuesday morning, after a discussion on “Fox & Friends” about 366 positions that still have no nominees.

“We are not looking to fill all of those positions. Don't need many of them - reduce size of government,” Trump tweeted.

That Trump and Tillerson plan to cut positions and leave vacancies unfilled is not a complete surprise, considering Trump's "drain the swamp" mantra. Tillerson also indicated from essentially his first day on the job, in February, that he would lead a top-to-bottom audit of the agency.

As for other positions, Trump has repeatedly blamed Senate Democrats for slowing the confirmation process for his appointees.

“Dems are taking forever to approve my people, including Ambassadors,” he tweeted earlier this summer. “They are nothing but OBSTRUCTIONISTS! Want approvals.”

And several weeks ago, before Congress adjourned for the August recess, Senate Majority Leader Mitch McConnell accused Democrats of “playing games,” particularly by forcing procedural votes on nominees they ultimately intend to confirm.

“It doesn’t really matter whether a nominee has been nominated to serve in the judiciary or work as an ambassador … Democrats have time and time again been willing to force needless, needless procedural votes on nominees they actually support,” McConnell said on the Senate floor.

Democrats in the GOP-controlled chamber have repeatedly dismissed the argument, arguing that Trump has been slow getting nominees to Capitol Hill.

“Your lack of nominations is the problem,” Maryland Sen. Ben Cardin, the top Democrat on the Senate Foreign Relations Committee, which conducts confirmation hearings for ambassadors, tweeted in response to Trump’s finger-pointing.

However, Senate Minority Leader Chuck Schumer, D-N.Y., made clear early this summer that he intended to disrupt the chamber’s daily business as Republican leaders began efforts to repeal and replace ObamaCare.

McConnell delayed the start of the Senate’s August recess by a week to confirm more appointees. But the roughly six-dozen confirmations over that period represent only a fraction of the positions Trump has been expected to fill.

There are more than 1,100 positions that require Senate confirmation. Excluding judiciary and non-civilian positions, Trump has sent 277 nominations to Capitol Hill, and just 124 have been confirmed, according to the nonprofit Partnership for Public Service.

Among the Cabinet-level agencies still without numerous Senate-confirmed officials are the Labor and State departments.

Trump has submitted names for just three of the 14 Labor posts. And the names of just 46 nominees have been submitted for 141 State posts.

Concerns about vacancies re-emerged on Friday, when then-Hurricane Harvey hit the Texas Gulf Coast and forced a massive federal response -- with the Department of Homeland Security under an acting secretary, the FEMA director in his post for two months and the National Oceanic and Atmospheric Administration still without a leader.

Max Stier, the partnership’s president and chief executive, has been critical about the process, particularly the small number of nominees submitted. He’s raised particular concern about Tillerson conducting the audit of such a vital agency as one administration hands off to another.

“You cannot re-engineer the plane and fly it at the same time,” Stier said last week.

Tillerson in April purportedly considered eliminating 2,300 jobs and consolidating the State Department with the U.S. Agency for International Development, in response to the Office of Management and Budget's call to slash the both budgets by 31 percent.

However, numerous members of Congress opposed such deep cuts to the diplomatic budget, which accounts for just over 1 percent of the total federal budget.

In his letter to Congress on Monday, Tillerson detailed his plan to eliminate special envoys, including for Afghanistan-Pakistan, disability rights and the closure of the Guantanamo Bay detention center. However, Trump plans to keep envoys for religious freedom, fighting anti-Semitism and LGBT rights.

Under the plan, of the 66 current envoys or representatives, 30 will remain. Nine positions will be abolished outright. Twenty-one will be "integrated" into other offices, five will merge with other positions, and one will be transferred to USAID.

Tillerson, in the letter, said he believed the State Department could "better execute its mission" by integrating some positions. Sources told Fox News on Tuesday that a final plan could come as early as next month.

Tillerson's letter responded to legislation passed by the Senate Foreign Relations Committee in July that took aim at the proliferation of special envoys and directed Tillerson to tell Congress which positions he wanted to keep.