Part 2 of President Trump's 2018 State of the Union Address

President Trump says his administration is protecting religious liberty, making sure veterans are being taken care of, ending the war on clean coal and working to reduce the price of prescription drugs, rewrite bad trade deals and permanently fix the nation's infrastructure.

President Trump appealed for common ground in the immigration debate at his first State of the Union address Tuesday night, while holding firm on his demands for border security and using the grand setting to tout his economic accomplishments and declare a “new American moment.”

At a critical time when the political divide over immigration has held up essential government funding, the president called to put politics aside and "get the job done."

"Tonight, I am extending an open hand to work with members of both parties -- Democrats and Republicans -- to protect our citizens of every background, color, religion, and creed," he said. 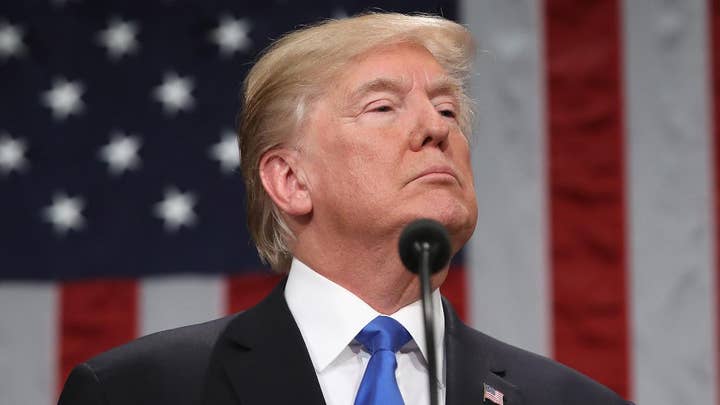 It remains unclear whether Democrats are ready to deal on immigration, but the issue could hang over a looming Feb. 8 deadline to pass a new spending bill. With that in mind, Trump used his hour and 20-minute speech to signal a willingness to make bipartisan deals on second-year-agenda priorities like immigration as well as infrastructure.

“Tonight, I call upon all of us to set aside our differences, to seek out common ground, and to summon the unity we need to deliver for the people we were elected to serve,” the president said.

The president described his recent offer on immigration as a "fair compromise" for both sides. The White House is pushing a plan to broaden eligibility for the DACA program – which gives a reprieve to illegal immigrants brought to the U.S. as children, and which Trump is planning to end absent a legislative solution – in exchange for border wall funding and other big changes.

"Tonight, I call upon all of us to set aside our differences, to seek out common ground, and to summon the unity we need to deliver for the people we were elected to serve."

He described his offer of a path to citizenship for 1.8 million DACA recipients, or DREAMers.

“We presented the Congress with a detailed proposal that should be supported by both parties as a fair compromise -- one where nobody gets everything they want, but where our country gets the critical reforms it needs and must have,” he said.

Even as he pushed for an immigration deal, the president didn’t stray from messaging aimed at his base. Trump said his “highest loyalty, my greatest compassion, and my constant concern is for America's children, America's struggling workers, and America's forgotten communities.” 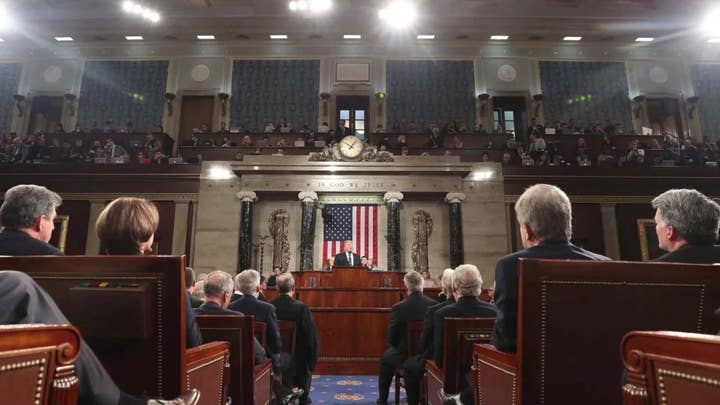 “Americans are dreamers too,” he said.

He also called on Congress to "finally close the deadly loopholes" that have allowed MS-13 to flourish inside the country.

TRUMP HONORS PARENTS OF MS-13 VICTIMS: 'AMERICA IS GRIEVING FOR YOU'

The president tackled national security toward the end of the speech, specifically warning that North Korea's “reckless pursuit of nuclear missiles” could “very soon” threaten the United States.

“We are waging a campaign of maximum pressure to prevent that from happening,” he said. “Past experience has taught us that complacency and concessions only invite aggression and provocation. I will not repeat the mistakes of past administrations that got us into this dangerous position.”

During the speech, the president recognized the parents of Otto Warmbier, the University of Virginia student who died over the summer after being injured while imprisoned in North Korea, who attended Tuesday’s address.

Vowing to fight terrorism, the president said he ordered Defense Secretary James Mattis to reexamine the military’s detention policy toward terrorists and keep open the detention facilities at Guantánamo Bay.

The president called for bipartisan cooperation on infrastructure, saying "together, we can reclaim our great building heritage." He said every federal dollar for infrastructure projects should be “leveraged” by partnering with state and local governments and private sector investors for projects.

"We will build gleaming new roads, bridges, highways, railways and waterways all across our land, and we will do it with American heart, and American hands, and American grit," Trump said.

“This is our new American moment. There has never been a better time to start living the American dream.”

Like other presidents before him, Trump used the address to tout first-year accomplishments like the GOP tax cut bill, regulation rollbacks, the elimination of ObamaCare’s individual mandate and gains made over the last year against the Islamic State.

Insisting that the “era of economic surrender is over,” Trump reiterated his campaign promises to fix bad trade deals and negotiate new ones. And he celebrated the stock market gains during his first year in office.

“The stock market has smashed one record after another, gaining $8 trillion in value,” he said. “That is great news for Americans' 401k, retirement, pension, and college savings accounts.”

“This is our new American moment,” Trump said. “There has never been a better time to start living the American dream.”

He began his speech by praising heroes during natural disasters and tragedies over the last year, including during the summer shooting of Republican lawmakers at a baseball practice.

“With us tonight is one of the toughest people ever to serve in this House -- a guy who took a bullet, almost died, and was back to work three and a half months later: the legend from Louisiana, Congressman Steve Scalise,” Trump said.

Earlier Tuesday, during a pre-speech lunch with television anchors, Trump -- who does not shy away from conflict with his detractors -- said “unity is really what I'm striving for, to bring the country together."

The address comes after a year of partisan clashes in Washington over health care, the 'travel ban,' regulations and more.

Ahead of the speech, leaders were bracing for potential conflicts.

Pelosi advised Democrats against a walk-out, with sources in the room saying Pelosi told members “if you want to walk out, don’t come” and to let Trump be “his slobbering self.”

During the speech, some caucus members declined to stand even to honor a 12-year-old guest of the first family who was recognized for gathering flags for veterans' graves.

Trump praised Preston Sharp, a boy from California, who started a movement to place flags at the graves of fallen service members.

“Preston's reverence for those who have served our nation reminds us why we salute our flag, why we put our hands on our hearts for the pledge of allegiance, and why we proudly stand for the national anthem,” he said.

Trump's comments were aimed at the NFL football players who have been kneeling during the national anthem as a protest against police shootings of African-Americans.

Democrats tapped Rep. Joe Kennedy III, D-Mass., the grandson of Sen. Robert Kennedy, to deliver the party’s official response to Trump. In remarks before a small audience in Massachusetts, Kennedy said many in the country have spent Trump’s first year in office “anxious, angry, afraid.”

REP. KENNEDY SLAMS 'BULLIES' IN RESPONSE TO TRUMP'S STATE OF THE UNION

“Folks, it would be easy to dismiss this past year as chaos,” he said. “As partisanship, as politics. But it's far, far bigger than that. This administration isn't just targeting the laws that protect us, they're targeting the very idea that we are all worthy of protection.”

Trump, though, struck a positive and optimistic note in his speech, ending his address to Congress by saying: “Americans fill the world with art and music. They push the bounds of science and discovery.”

“And they forever remind us of what we should never forget: The people dreamed this country," Trump continued. "The people built this country. And it is the people who are making America great again."