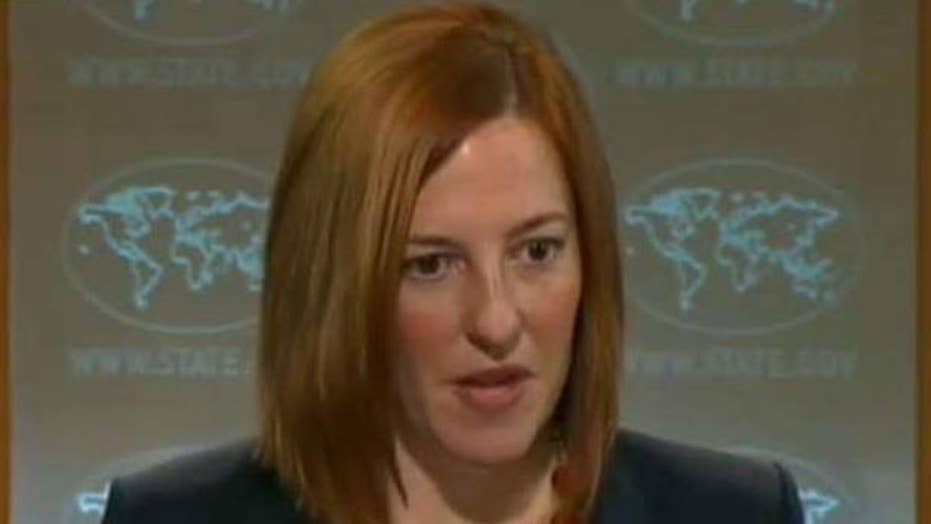 While the White House scrambles to contain the damage caused by one of President Obama's closest aides -- who boasted of manipulating social media, journalists and friendly interest groups to sell the Iran nuclear deal -- it now is facing new questions about a portion of missing tape in which a State Department official acknowledges misleading the press on the Iran negotiations.

Sen. John McCain, R-Ariz., issued a scathing statement Monday saying the article “exposed how the White House manipulated and, in some cases, manufactured facts to sell the reckless Iran nuclear deal to the American people as a prelude to large-scale disengagement from the Middle East.”

Now, the administration is facing further questions over a block of missing tape from a 2013 State Department briefing where top spokeswoman Jen Psaki was asked by Fox News about an earlier claim that no direct, secret talks were underway between the U.S. and Iran – when, in fact, they were.

In that exchange, Psaki seemed to acknowledge misleading the press, saying: “There are times where diplomacy needs privacy in order to progress. This is a good example of that.”

The Psaki comments, and prior department remarks, would appear to conflict with a fresh claim by Rhodes that they “confirmed publicly” there were “discreet channels of communication established with Iran in 2012.”

That Psaki exchange, however, was missing from the department’s official website and its YouTube channel. The department now says it cannot explain the deletion and is working to restore the material.

Rhodes, though, maintains they did not mislead the public over the Iran deal.

In the magazine profile, published last Sunday, Rhodes and his aides are quoted describing how they disseminated White House-generated talking points about the Iran deal to generate and manipulate the public dialogue.

"We created an echo chamber," Rhodes said. "They were saying things that validated what we had given them to say."

Rhodes sought to soften the remarks on the website Medium. In a post late Sunday, he wrote that he didn't try to dupe the press or spin Washington.

"It wasn't 'spin,' It's what we believed and continue to believe, and the hallmark of the entire campaign was to push out facts," Rhodes wrote. "These were complicated issues."

The Times piece, however, quotes Rhodes lamenting the ignorance of Washington reporters. ("They literally know nothing"), and describes Rhodes -- a former aspiring novelist -- as focused on crafting a storyline and dismissing facts that don't fit.

Rhodes also appears to try to keep secret news that Iran had seized 10 U.S. Navy sailors until after the president's State of the Union speech.

In his statement Monday, McCain, a long-time critic of the Iran pact, said the Times piece "provided a troubling glimpse of the White House spin machine that has put sustaining 'the narrative' above advancing the national interest."

White House spokesman Josh Earnest has said Rhodes' concern about the timing of the disclosure of seizure of the sailors in January was primarily about the sailors' safety — not about concerns that the news would interfere with the president's speech. He said he was certain Rhodes would recast his description of the Washington press corps.

"I assure you that's not how it was intended, and based on that reaction I'm confident he would say it differently if given the chance," he said.

Fox News’ James Rosen and The Associated Press contributed to this report.