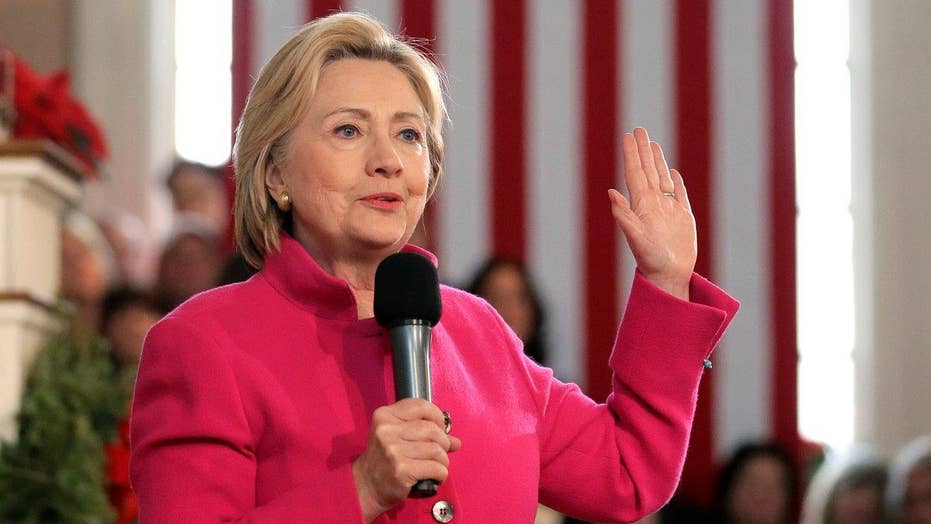 The State Department on Thursday released over 3,000 of Hillary Clinton's personal emails from her time as Secretary of State, marking the last of the major document dumps of the year.

Still, the agency said Thursday that it will fall short of the mandate to release 82 percent of Clinton’s total emails by the end of 2015, blaming the holiday schedule and the sheer number of documents involved.

“We have worked diligently to come as close to the goal as possible, but with the large number of documents involved and the holiday schedule we have not met the goal this month,” the State Department said in a statement. “To narrow that gap, the State Department will make another production of former Secretary Clinton’s email sometime next week.”

The latest batch of 3,105 emails includes 275 documents upgraded to "classified" since they landed in the former Secretary's personal inbox. That brings the total number of classified docs found in the emails to 1,274. A State Department official told Fox News on Thursday that two of those emails were upgraded to "secret," while most of the others were upgraded to "confidential."

The newly released emails reveal Clinton and one of her closest aides, Jake Sullivan, had an exchange in September 2010 that showed considerable confusion over her email practices.

"I'm never sure which of my emails you receive, so pls let me know if you receive this one and on which address you did," she wrote to Sullivan on a Sunday morning.

A few hours later Sullivan responded: "I have just received this email on my personal account, which I check much less frequently than my State Department account. I have not received any emails from you on my State account in recent days — for example, I did not get the email you sent to me and (Assistant

Secretary for Near Eastern Affairs Jeff) Feltman on the Egyptian custody case. Something is very wrong with the connection there."

Sullivan added, "I suppose a near-term fix is to just send messages to this account — my personal account — and I will check it more frequently."

Clinton also cited trouble with her BlackBerry in January 2012, according to one of her emails. "Sorry for the delay in responding," she wrote to Jamie Rubin, a diplomat and journalist, saying her BlackBerry was having "a nervous breakdown on my dime!"

In another exchange, Billionaire George Soros, a major donor to liberal causes, confided to a former Clinton aide that he made the wrong choice in supporting Barack Obama in the 2008 primaries over Clinton.

Soros told Neera Tanden during a dinner sponsored by Democracy Alliance, a liberal group, that he "regretted his decision in the primary — he likes to admit mistakes when he makes them and that was one of them," Tanden told Clinton in a May 2012 email. "He then extolled his work with you from your time as First Lady on."

Tanden also said Soros had been "impressed that he can always call/meet" with Clinton on policy issues but he hadn't yet met with Obama. Soros has been a major donor to Priorities USA, a pro-Clinton Democratic super PAC.

Republican National Committee (RNC) Chairman Reince Priebus seized upon the news of the upgraded emails as another reason the 2016 presidential candidate couldn't be taken at her word.

"With more than 1,250 emails containing classified information now uncovered, Hillary Clinton's decision to put secrecy over national security by exclusively operating off of a secret email server looks even more reckless," he said in a statement on Thursday.

"When this scandal first broke, Hillary Clinton assured the American people there was no classified material on her unsecure server, a claim which has since been debunked on a monthly basis with each court-ordered release. With an expanded FBI investigation underway and new details emerging about the conflicts of interest her server was designed to conceal, Hillary Clinton has shown she lacks the character and judgement to be president during this critical time for our country."

The State Department, however, reminded that the classifications were retroactive. "The information we upgraded today was not marked classified at the time the emails were sent," the official said.

By court order, the State Department is required to release as many of her emails as they can in a single installment on the last weekday of every month. It released over 7,000 on Nov. 30.

The State Department also said in its statement that most of the documents will have incomplete data fields on the FOIA website, citing “an effort to process and post as many documents as possible.” This means that many of the documents will not have full completed fields for “Subject,” “To,” or “From.” The statement says that that data will be added in January.

Clinton has been under fire through much of 2015 about her use of a private, unsecured email server as secretary of state, specifically over the security of her server, and her incomplete retention of her emails. Clinton claims that she has turned over all work-related emails and has only deleted private or personal emails. She also claims that she never sent or received emails marked classified.

The State Department has released installments of her emails every month since May.

The last batch in November, contains 328 emails deemed to have classified information. According to the State Department, that brought the total number with classified information to 999. The emails also covered the tumultuous period before and after the Sept. 11, 2012, Benghazi terror attacks. On the night of the attacks, the communications show Clinton notifying top advisers of confirmation from the Libyans that then-Ambassador Chris Stevens had died.

The final installment is expected just before the Iowa caucuses in February.