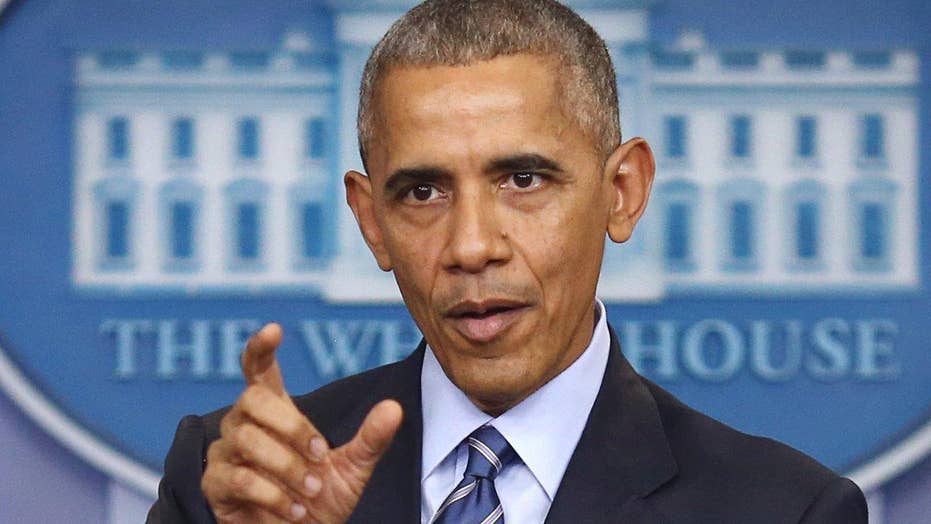 A flurry of big decisions out of the Obama administration just weeks before President-elect Donald Trump takes office has rekindled Republican concerns about President Obama’s plans for jamming through so-called “midnight regulations” and other leftover items from his wish-list on his way out the door.

In the last week alone, the Obama administration blocked future oil and gas leases in swaths of the Arctic and Atlantic oceans; granted a record number of pardons and commutations for a single day; and scrapped a dormant registry for male immigrants from a list of largely Muslim countries.

Defense officials told Fox News there is an effort underway to transfer up to 22 additional detainees out of Guantanamo Bay. And Obama’s ambassador to the United Nations stunned Israel on Friday by abstaining on a Security Council measure condemning settlement activity, allowing it to pass.

And Obama still has a month left in office. The most recent announcements were made while the first family was on vacation in Hawaii – leaving unclear what Obama has in store for when he gets back to Washington.

Hanging over any final actions is the likelihood that Trump, once in office, will roll back many of them. “The things he’s done this week will be turned around,” former House Speaker Newt Gingrich said of Obama on “Fox News Sunday.” “He’s in this desperate frenzy.”

But Democrats are urging the outgoing president to pursue further actions, as the administration weighs its next steps.

The White House has expressed reluctance to take some of these steps.

White House spokesman Eric Schultz said “there is a process at the Department of Justice to review pardon applications” and “the president has said he is not going to do anything to circumvent that process.” As for Carter’s appeal, Schultz said, “I don't think [Carter’s] views are new today, so I don't have any new positions or views from us on that.”

White House Press Secretary Josh Earnest also said recently that any executive actions the president takes at this stage likely were in the works before the November election.

“What I can rule out are any sort of hastily added executive actions that weren’t previously considered that would just be tacked on at the end,” Earnest said.

While Obama weighs his last batch of policy decisions, many regulations already are coming through the pipeline. The final plans reportedly include as many as 98 regulations classified as “economically significant,” meaning each would cost the economy $100 million through compliance and consumer impact.

According to an analysis by the conservative American Action Forum, based on the Federal Register agenda, the administration is eyeing $44.1 billion in “midnight regulations” – or rules pushed in the final two months of an outgoing administration.

“This has been the most active December ever for regulations,” Sam Batkins, AAF’s director of regulatory affairs.

Gina McCarthy, administrator of the Environmental Protection Agency, didn’t conceal her eagerness in a staff memo sent after the election. “As I’ve mentioned to you before, we’re running—not walking—through the finish line of President Obama’s presidency,” McCarthy wrote.

Among regulations expected to take effect: the U.S. Citizenship and Immigration Services plans to make it easier for employers to sponsor highly skilled immigrants in the country; the Education Department is working on student debt relief at for-profit colleges; and on the financial services side, the Federal Reserve and the Securities and Exchange Commission are working on matters such as executive pay and mutual fund management.

Congressional Republicans are bent on stopping or reversing the onslaught of new rules.

In a Dec. 5 letter, 20 Republican senators asked Obama to “honor the will of the American people and refrain from working on or issuing any new, non-emergency regulations while carrying out your remaining term in office.”

House Majority Leader Kevin McCarthy, R-Calif., in a Nov. 15 letter to federal agency heads signed by other House committee chairmen, asserted, “we will work with our colleagues to ensure that Congress scrutinizes your actions—and, if appropriate, overturns them.”

The Congressional Review Act of 1996 allows Congress, with the president’s signature, to rescind regulations and prohibit agencies from imposing rules that are substantively the same.

That, however, would have limits even when Trump takes office, Batkins said.

“Congress can rescind regulations when it gets back, using the CRA, but the House and Senate will be working on health care, the economy and infrastructure,” Batkins told FoxNews.com. “Congress has a lot on its plate. Of the 100 or more midnight regulations that could fly through, there probably won’t be more than a dozen they would be interested in repealing.”

Asked at a November press conference about GOP calls to hold off on finalizing rules in his final weeks in office, Obama defended their rulemaking pace: “The regulations that we have issued are ones that we've been working on for a very long time. … These aren't things that we've been surprising people with.”