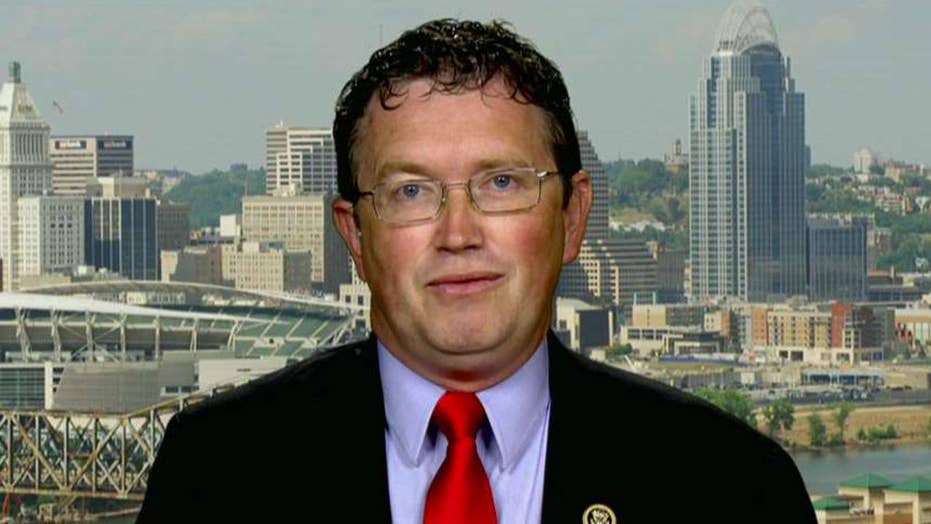 A Republican lawmaker is warning that the $1.3 trillion spending bill approved by Congress last week means more aging veterans could be deprived of owning guns because of a policy that targets those who no longer handle their finances.

Rep. Thomas Massie, R-Ky., told the House Committee on Rules the bill could “result in more veterans losing the right to keep and bear arms” because it includes an unrelated provision bolstering the National Instant Criminal Background Check System.

“At the VA, you have veterans who are losing their right to keep and bear arms every day... if they do so much as just to say to the person interviewing them that 'somebody else manages my finances,'" Massie said.

Under current policy, the Department of Veterans Affairs asks veterans who apply for benefits whether they handle their own finances. If they don't do their own bills, the government considers them "incompetent" to handle their benefits, and their name then goes to the FBI's "NICS" background check system.

If that happens, the veteran is blocked from buying or owning any guns.

In many cases, those affected say they are of sound mind and are surprised to find themselves blocked from purchasing a firearm.

"It was a total shocker," Mark Jeffery, an Ohio-based veteran affected by this policy, told Fox News. "The guy who made this determination on me was not a psychologist."

He appealed and waited more than two years for a final answer, which was settled in his favor just this week.

Massie says the new bill will make the situation “worse” because it will “apply more pressure on the VA to more diligently put report those veterans' names into the database.”

When this happens to a veteran, they have a 30-day window to appeal. If they appeal, the process often takes years and thousands of dollars in legal fees.

“VA reports a veteran to the National Instant Criminal Background Check System if he or she is adjudicated as incompetent by the Veterans Benefits Administration for purposes of managing his or her monetary benefits,” a Veterans Affairs spokesman said.

The VA spokesman continued: “This process is mandated by law and provides protections for the Veteran, including an opportunity for the Veteran to appeal.”

The VA's system mirrors a process set up by the Obama administration that applied the same policy to Social Security recipients. Congress repealed that Obama rule, but a similar measure to end the same practice for veterans died in the Senate.

The VA sent more than 35,000 veterans' names to the FBI to be blocked from buying or owning guns in 2017 alone, according to a VA document. The document was obtained by a lawyer named Seth Watkins via a Freedom of Information request, and he provided it to Fox News.

"The system is just absurd"

More than 200,000 veterans have lost their gun rights since 2010, the documents indicate.

“I’m not on the right or the left. There’s just a problem in the mechanics of how this is done,” a Veterans Administration employee told Fox News.

“The problem is, there’s no delineation between the individual who is ready to climb up into a clock tower and start shooting, as opposed to the individual who has a touch of dementia and has lost their checkbook,” the employee said.

The VA employee requested that he and his job title remain anonymous for fear of retaliation by the VA.

Henry Wrobel, 63, a veteran affected by this policy, won his appeal after two years of being on the gun blacklist.

“Yesterday I got the pistol permit back again,” Wrobel of Canton, Texas told Fox News on Wednesday.

Wrobel said his ordeal began when a lower-level VA hospital person asked him about his finances. He told the employee that his wife suggested it would be easy to set up auto-debit payments.

“I set up auto-debit to pay my electric bill, phone bill, insurance, TV,’” Wrobel said. “And out of that, he checked ‘no, his wife does it.’”

He prides himself on being good with finances. Wrobel says has bought, improved and sold land and has a credit score over 700.

He said he was “treated as a convicted felon” with his “firearm rights” taken.

Eventually the VA overturned their decision and asked the FBI to remove Wrobel’s name from the banned list – making him a rare case where a veteran beat the system.

“Constitutional rights are so fragile. You’ve got to fight for it... it’s like people don’t want you to have the right to have guns,” Wrobel said.

Wrobel won his challenge, but other veterans say they’re giving up hope.

“About a year and a half ago, I tried to purchase a firearm to go deer hunting,” Pennsylvania-based veteran Cataldo Amico, 69, told Fox News.

But his background check came back denied.

He says he told the store clerk: “I don’t have a criminal record, I’ve never spent time in an insane asylum – where do you get this from?”

Multiple calls to government agencies later, Amico was told he had been “adjudicated mentally defective.”

“I think -- what the hell are they talking about?” he recalled. “Nobody ever informed me of this. I just want to get back in the woods with deer hunting, you know?”

Amico said the only thing he can think of is that he was treated for depression years back – but he says he’s felt better for a long time and is on no medications.

He says he got nowhere talking with the VA, as the window for a normal appeal was past. He paid several hundred dollars for a lawyer to put in a formal complaint, but the VA response came back: go ahead, sue us.

“Not only that, the wheels of justice turn slowly... I’m in very good health for a guy who’s 69, but this could take years -- if I ever got cleared,”

“To be honest with you, I’m kind of giving up hope,” Cataldo said. “It would take an act of God to fix this.”

Maxim Lott can be reached on Twitter at @maximlott.