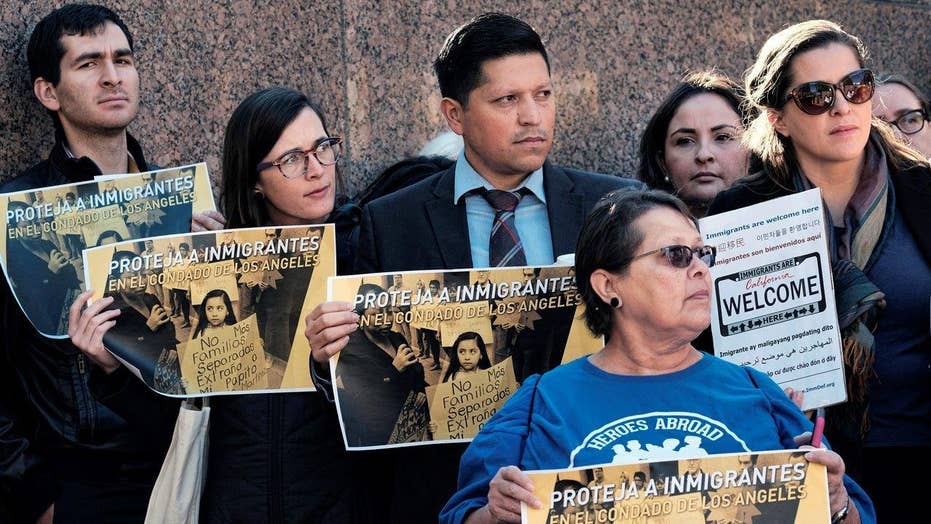 As President-elect Donald Trump prepares to take office, a major showdown looms between his administration and cities across the country over one of his hallmark campaign issues: illegal immigration.

At the Southern border, agents are on pace to apprehend almost 600,000 illegal immigrants, the highest number in eight years. The surge is coming largely from Central American migrants, far outpacing those from Mexico.

"They're mobilizing because they don't know what tomorrow will bring, but know today they can cross,” said Chris Cabrera, of the National Border Patrol Council.

Many illegal immigrants from Central America indeed have been motivated to make the trek after word traveled under the Obama administration that some could request asylum, claiming a “credible fear” of persecution should they return home.

But another driver is the knowledge that certain major cities offer “sanctuary” protections from deportation. Those same cities are now gearing up to fight on their illegal immigrant residents’ behalf against the incoming president.

“The reason it was important for us to act is we will have a change in government next month,” he said. “We expect there could be actions right away.”

In announcing the fund, Garcetti vowed to fight for the “good and law-abiding immigrants of Los Angeles.” Asked if those with a criminal record would be excluded, however, he said no.

But such cities could be in for a major battle with the Trump administration, following campaign vows to deny federal funds to sanctuary cities.

Texas GOP Rep. John Culberson says federal law prohibits local and state law enforcement from refusing to share immigration status information with federal authorities. He believes the law will give Trump the power to follow through in denying funds to sanctuary cities such as Los Angeles, Chicago and New York.

“The president can cut off their money at noon on January 20, 2017 if they do not change their sanctuary policy and hand over criminal illegal aliens in their custody to be deported,” Culberson told Fox News.

Culberson, chairman of the House Appropriations subcommittee overseeing the Department of Justice, added that President Obama’s attorney general not only is aware of the policy, but signed off on tying suspected violations to potential financial penalties.

“I quietly persuaded Attorney General Loretta Lynch to implement this new policy this past July,” he said. “So it’s already done.”

This gap in interpretation sets up a battle with 100 or so cities that stand to lose substantial federal funds should they refuse to cooperate in the Trump administration’s promised deportation efforts.

The traffic at the border, meanwhile, continues to surge.

U.S. Customs and Border Protection reports that last month alone, agents arrested 7,406 unaccompanied children and 15,573 families from Guatemala, Honduras and El Salvador, a significant surge compared with the same month one year ago, when the agency apprehended 5,604 children and 6,471 families.

Under current policy for those seeking asylum, Border Patrol agents are required to process the immigrants for their day in court, which entitles them to a work permit and a plane or bus ticket to stay with relatives until it’s time to see an immigration judge. The typical wait-time is four to five years and, according to government data, up to 80 percent never show up.

The federal agency that handles deportations is spending, on average, $665 per juvenile to pay for travel to relatives in the U.S. or back home if they’re deported, according to calculations by the Immigration Reform Law Institute, a government watchdog group. That puts the current taxpayer cost at roughly $5 million a month.

With monthly apprehensions at a five-year high, border agents say they are slammed.

"We're not a deterrent because they're looking for us, so we can be standing there and [the smuggler will] still send them across," said Texas-based agent Marlene Castro. "It's been a group, and then maybe five minutes later another group, and then half an hour later you'll see another one."