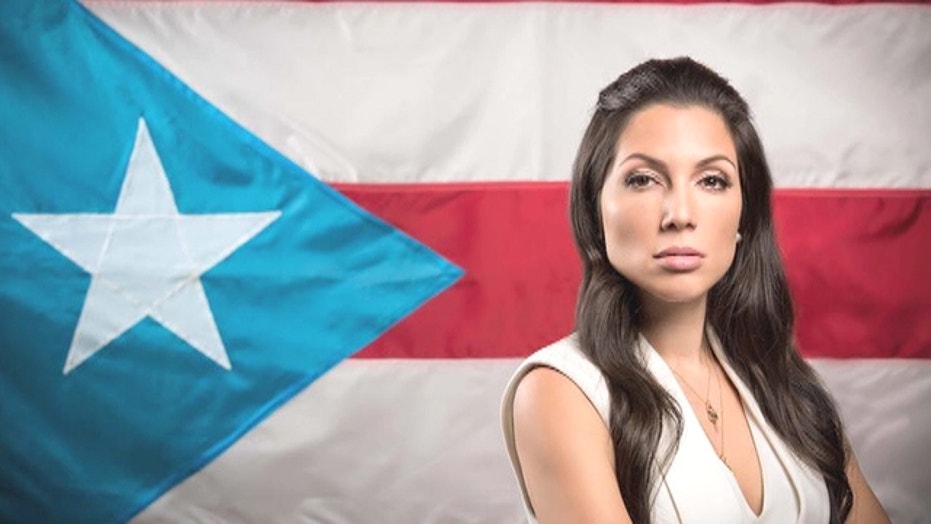 Alexandra Lúgaro is vying to become the first person to run for governor of Puerto Rico as an independent -- and she's causing a stir in the island.

At just 33-years-old, Alexandra Lúgaro, a lawyer and business owner, is causing a big stir in Puerto Rico – becoming the first person to run as governor of the island as an Independent.

If elected, she would become the youngest to ever hold the island's highest office and her ideas reflect her millennial sensibilities. She wants to legalize marijuana, same-sex marriages, and tax the island's churches.

Lúgaro, a married mother to a 4-year-old daughter, believes it’s time for Puerto Ricans to get away from the two-party system – where voters in the commonwealth cast their ballots based on where the party stands on the issue of Puerto Rican statehood --  instead of voting based on a candidate's ideas.

“I was tired of seeing our island collapse on TV,” Lúgaro said of announcing her candidacy for the 2016 gubernatorial race. “When I found myself thinking that I will probably have to leave my island to look for a better job opportunity in another place I told myself I have the preparation, I am a skilled and educated worker, and I can do this.”

Puerto Rico is mired in a decade's long recession, its unemployment rate has hovered around 13 percent, and crime is on the rise as more cocaine drug traffickers use the island as a gateway into the U.S. mainland.

In a wide ranging interview with Fox News Latino, Lúgaro laid out her plan which prioritizes what she considers to be the island’s biggest problems: the education system and the economy.  Puerto Rico's economy – drowning in $72 billion in debt - and an education system she says has followed "America's failing model" for far too long.

“Other countries are passing us by because they are not just concentrating on passing standardized tests. For me, education is the first priority in our country,” she said.

Lúgaro holds a bachelor’s degree in finance and economics, a master’s degree in public and private law and is finishing up her doctorate in tax law reform.

The independent candidate says she wants to renegotiate the island's debt, fundamentally believing Puerto Ricans should not be stuck footing the bill every day.

“If renegotiating doesn’t work….I don’t believe in making people in Puerto Rico pay for decades of mismanagement of budgets and agencies,” she said.

She believes legalizing marijuana could not only help the island’s struggling economy but also its rising crime rate.

“A tax on cannabis can help improve the income of the Puerto Rican government,” Lúgaro said. “Not only that, it can reduce the efforts of the police, of the correctional and justice departments and they can concentrate their efforts on other types of crimes and not prosecuting a guy for a bag of weed.”

Since the announcement of her candidacy less than a month ago, she has been attacked for emphasizing her good looks, (she posted a photo of herself in a bathing suit on Instagram), and has also been accused by some of misusing Department of Education money contracted to her company. The FBI raided her office two weeks ago. She says she is cooperating with the investigation and that federal investigators are investigating all businesses or organizations that received government money from the Department of Education through Title 1 of the No Child Left Behind Act in 2010.

“The FBI hasn’t communicated yet what they are looking for or what they are investigating, anything else is speculation,” she said. “I am respecting the process.”

She went on to say,” I am not worried at all. I welcome this investigation and I am very sure everything’s going to turn out to be very good for my campaign in the end.”

The detractors and naysayers have been forceful from the get-go, forcing her to respond in a candid post on her Facebook page in which she defiantly pledged to not back out of the race despite the establishment's attempts to undermine her campaign.

Lúgaro says a lot of the attacks have to do with the fact that she is an attractive woman. A photo of her in a bikini on social media got a lot of attention on the island, and she admits the attention on her looks has been “frustrating.”

“The machismo has definitely been a great part of it,” Lúgaro explained. “It definitely was a distraction when I started my campaign. People were more focused on my physical appearance than what I had to offer.”

Lúgaro is different and she's not only aware of it, she's embracing it. It is the basis of her entire campaign because, in her eyes, the only solution to extraordinary problems in Puerto Rico is an extraordinary candidate.

“I’m not backed by entities or individuals,” she said. “I’m not here to choose and make decisions for them. I’m here to make decisions that are going to be beneficial for Puerto Rico and we need them now. It’s a crucial moment in our country’s history.”