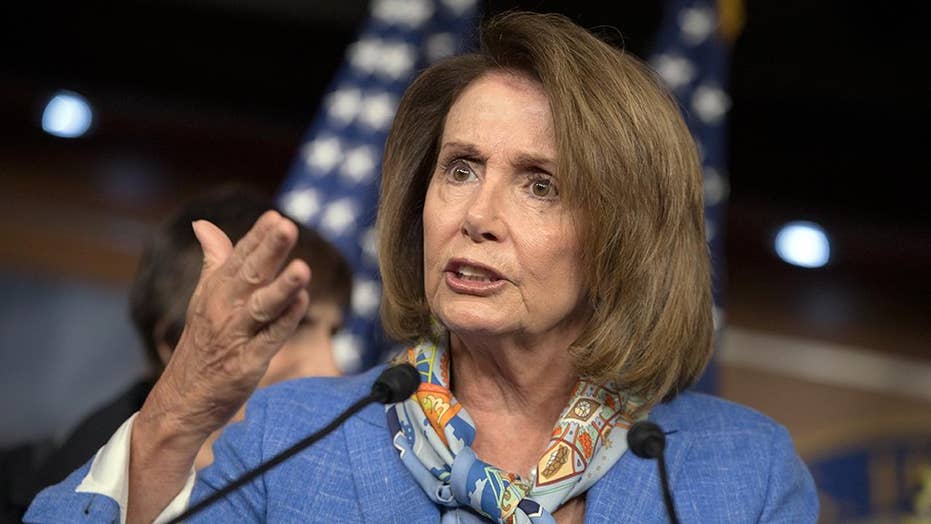 Some of Democratic leader Nancy Pelosi’s best (or worst) moments from 2017 include a series of confusing boasts and gaffes. Watch a compilation

But at this moment, Pelosi may as well clasp the speaker’s gavel, for all intents and purposes.

Republicans hold a 240-194 seat majority in the House of Representatives. Yet the GOP’s historically struggled to tackle nettlesome issues like funding disaster relief, lifting the debt ceiling and avoiding government shutdowns – often turning to Democrats on those vexing topics.

So it’s no surprise that on Wednesday morning, Pelosi and Senate Minority Leader Chuck Schumer, D-N.Y., declared they’d provide the necessary votes “for the Harvey aid package and a short-term debt limit increase of three months.”

Minutes later, House Speaker Paul Ryan, R-Wis., characterized the Democrats’ offer as “unworkable” and argued it would “put in jeopardy” the hurricane response. But when Ryan, Pelosi, Schumer and Senate Majority Leader Mitch McConnell, R-Ky., trotted to the White House for a tete-a-tete with President Trump, the president sided with the Democrats.

Never in recent memory has the president of one party so politically humiliated the House speaker of the same party. Pelosi and Schumer exited the White House with everything they wanted.

And she followed up the win with another display of influence, in a sense.

It concerned Trump’s Twitter account, which McConnell and those in Trump’s inner circle have been eager to tone down and adjust for months.

When new White House Chief of Staff John Kelly arrived to impose discipline and order, there was speculation he could temper the Tweeter in Chief.

But at 9:42 a.m. ET Thursday, the president published this Twitter gem: “For all of those (DACA) that are concerned about your status during the 6 month period, you have nothing to worry about - No action!”

And at whose behest did Trump dispatch that tweet?

“Boom, boom, boom, the tweet appeared,” Pelosi bragged after petitioning the president. “So that was good.”

Tweeting on request of the Democratic leader? It was a bizarre, but important, moment.

Pelosi faced an insurrection from some factions of her caucus earlier this year after Democrats stumbled in House races in November. Those same forces rose against Pelosi again after Democrats failed to capture a single seat in a string of special elections.

Pelosi sunk to her lowest ebb after each of those episodes, while still declaring herself a "master legislator" as she vowed to stay on.

But for the time being, Pelosi is close once again to power.

Trump, of course, has always been volatile and could turn on the Dem deal-makers in an instant.

After Wednesday, predicting his impulses is harder than forecasting hurricane spaghetti models.

Meanwhile, the pushback from conservatives is strong.

Rep. Mark Walker, who chairs the Republican Study Committee (RSC), the largest bloc of conservatives in the House, declared Monday that the “debt ceiling should be paired with significant fiscal and structural reforms.” He said that if the GOP failed to tackle the debt, “it only shows that Republicans do not take the problem of our $20 trillion debt seriously.”

By Thursday morning, Walker dashed off a letter to Ryan. Walker informed the speaker the RSC opposed the plan to couple Harvey aid with an interim spending bill and a debt ceiling hike. That meant Ryan would turn to Pelosi and Democrats to carry the day.

Multiple House Republicans suggested the speaker may have been asleep at the switch. They noted he’s been barnstorming the country on tax reform – yet never developed a plan to address the debt limit or slash spending. One senior House Republican who asked not to be identified suggested that Ryan would have been in a stronger negotiating position with Trump had he cobbled together a debt ceiling/offset blueprint – even if it were just for show. Absent that, the president sided with Pelosi.

To be fair, Hurricane Harvey and now Irma force the government to burn emergency cash at an Olympic rate. These storms will likely cost hundreds of billions of dollars. Such unexpected, staggering spending meant the government had an imminent rendezvous with the debt ceiling – rather than Sept. 29 as suggested by Treasury Secretary Steven Mnuchin. The storm scenario demanded Congress act – now. Otherwise, hurricane victims would be left without assistance. A debt limit collision could spark a market shock.

The debt ceiling suspension and government funding plan expire Dec. 8. Think Republicans will provide the votes to sidestep either crisis then? Or who has the leverage? How about Pelosi & Co. offering Democratic votes in exchange for a legislative fix for DACA?

By the way, where’s the money for the border wall?

You thought this month was going to be rough on Capitol Hill? December is the new September.

“Better deals are made in January than trying to jam things through a few days before Christmas,” said House Freedom Caucus leader Rep. Mark Meadows, R-N.C.

Like Walker, Meadows lamented the lack of deficit reduction or opportunities to offset the hurricane aid. He’s dubious Congress will ever adopt tax reform considering there’s much chatter yet no specifics.

“Most of the things we campaigned on were a mirage off in the distance,” said Meadows.