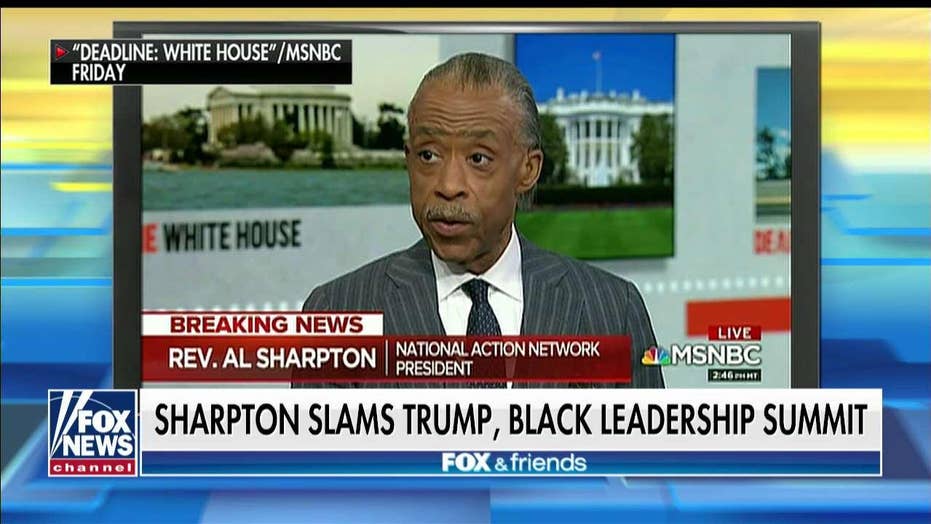 'He Should Be Ashamed of Himself': Al Sharpton Blasted for Criticism of Trump's Young Black Leadership Summit

The Rev. Al Sharpton has emerged as a kingmaker in the crowded 2020 Democratic field, as the party's White House hopefuls lined up this week to pitch their vision of America to him in hopes of receiving his blessing.

All of the top Democratic contenders were in New York City this week, attending Sharpton's National Action Network convention and discussing the issue of racism in America. More speeches were scheduled for Friday.

Such mainstream influence is a stark change for Sharpton, whose early years of activism put him on the fringes of politics. His explosive comments drew swift criticism, as he was accused of inciting violence and riots against Jews in New York in the early 1990s and reportedly used anti-Semitic descriptions such as “bloodsucking Jews” and “diamond merchants.”

BETO BACKS OFF OPPOSITION TO REPARATIONS AT SHARPTON EVENT, PLEDGES HE’D SIGN BILL TO STUDY IT

Fast forward to today, Sharpton is seen as a prominent progressive MSNBC pundit who acts as a kind of middleman between the Democratic candidates and Black America.

Unlike many other leaders in the black community, Sharpton also speaks directly to the anti-Trump segments of the country, even as the Trump administration passes a criminal justice reform embraced by many black leaders.

In 2017, Sharpton said during a Politico podcast that Trump “has empowered anti-Semites and racists” and “brought them from the shadows into the mainstream.”

A year later, he said Trump’s Young Black Leadership Summit was "shameful," and he accused the president of "using" young African-American conservatives as "props."

“I don’t think I am a different type of leader, I think these are different times,” Sharpton told the Los Angeles Times about him becoming acceptable in the mainstream. “It is more the evolution of Sharpton than the changing of Sharpton.”

“I don’t think I am a different type of leader, I think these are different times. It is more the evolution of Sharpton than the changing of Sharpton.”

For Democrats, who are heavily relying on people’s negativity toward Trump rather than their personal popularity coming into 2020, Sharpton is an especially important figure.

After Harris announced her run for president earlier this year, one of the first meetings she took was with Sharpton in New York, surrounded by multiple cameras and reporters.

Former Vice President Joe Biden, who hasn’t yet officially joined the race, made a speech at a Martin Luther King Jr. Day event that was organized by Sharpton, where the former veep said he regretted backing a tough-on-crime bill in the 1990s.

Sharpton remains cautious about which candidate he will effectively back, pointing out that he didn’t endorse anyone in the 2016 election. Yet the competition for his support is clearly moving the Democratic presidential field leftward.

Thanks to Sharpton’s convincing tone – or a candidate’s lack of backbone – he pressured O’Rourke earlier this week into backing off from his opposition to slavery reparations, with him coming out on the record saying he now supports a bill in Congress to study and consider the payments.

Buttigieg, the rising star of the primary, meanwhile, apologized Thursday during the appearance at the Sharpton event for using the “all lives matter” phrase in the past. He praised the Black Lives Matter movement and said that “it should enhance — not diminish — the value of a good police department when we assert what should go without saying, but in these times must be said clearly and again and again: that black lives matter.”

At least five other candidates are backing the idea of reparations – Harris, Warren, former San Antonio Mayor and Obama Cabinet member Julian Castro, entrepreneur Andrew Yang, and Rep. Tulsi Gabbard – though this may change after the events with Sharpton.

But for the time being, Sharpton says he merely wants candidates to propose a vision to address racism in America.